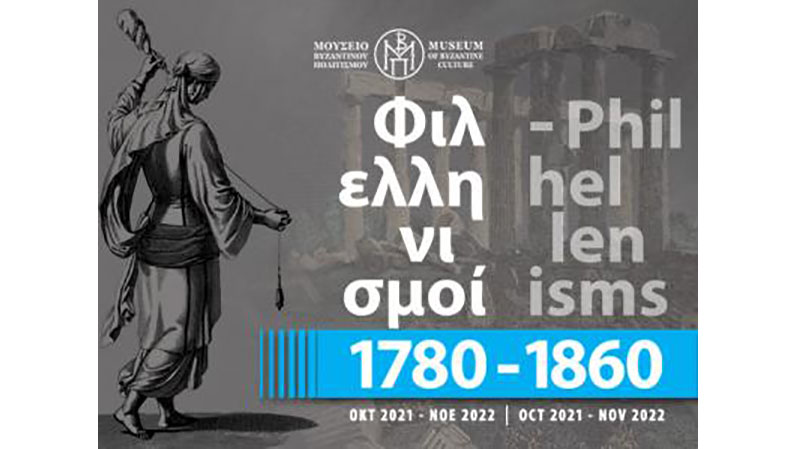 Philhellenisms, 1780-1860 at the Museum of Byzantine Culture

The Museum of Byzantine Culture inaugurates the exhibition Philhellenisms, 1780-1860, on Friday, November 26, 2021, 18:00 at the “Kyriakos Krokos” temporary exhibition hall.

Her Excellency, the President of the Hellenic Republic Katerina Sakellaropoulou will inaugurate the exhibition.

The Greek Revolution (1821-1830), an offspring of the European Enlightenment and the international revolutionary spirit that prevailed from the end of the 18th century and on, was neither the first nor the only one that broke out in the Ottoman Empire. It was, however, the first to result to the creation of a new state in the Eastern Mediterranean. Closely connected with the Greek Struggle was philhellenism, the multifaceted transnational movement that developed in the context of the central demand of the peoples of the time for more freedom and constitutional rule and managed to successfully mobilize Western public opinion in favor of the Greek insurgents. Through literary and historical texts, drawing representations of places and people, musical scores and applied art objects from private collections, the exhibition illuminates some of the multiple aspects of the philhellenic movement in the years before the Revolution, but also in the first decades of the new of the Greek state. At the same time, it explores the ways in which the philhellenes saw modern Greece – images and readings that largely defined the cultural modern Greek identity and shape even today the gaze that foreigners cast on the country.

The exhibition design approach attempts to highlight the content of the philhellenic books and music books exhibited through a central digital installation: the excerpts from the texts are read by actors of the State Theater of Northern Greece framed by engravings that become animated by digital technology, while the musical scores are performed by the Symphony Orchestra of the Municipality of Thessaloniki.

Admission to the inauguration by invitation only for fully vaccinated, and recoveredfrom COVID-19.

For more information on the opening hours of the exhibition, please visit our website at www.mbp.gr