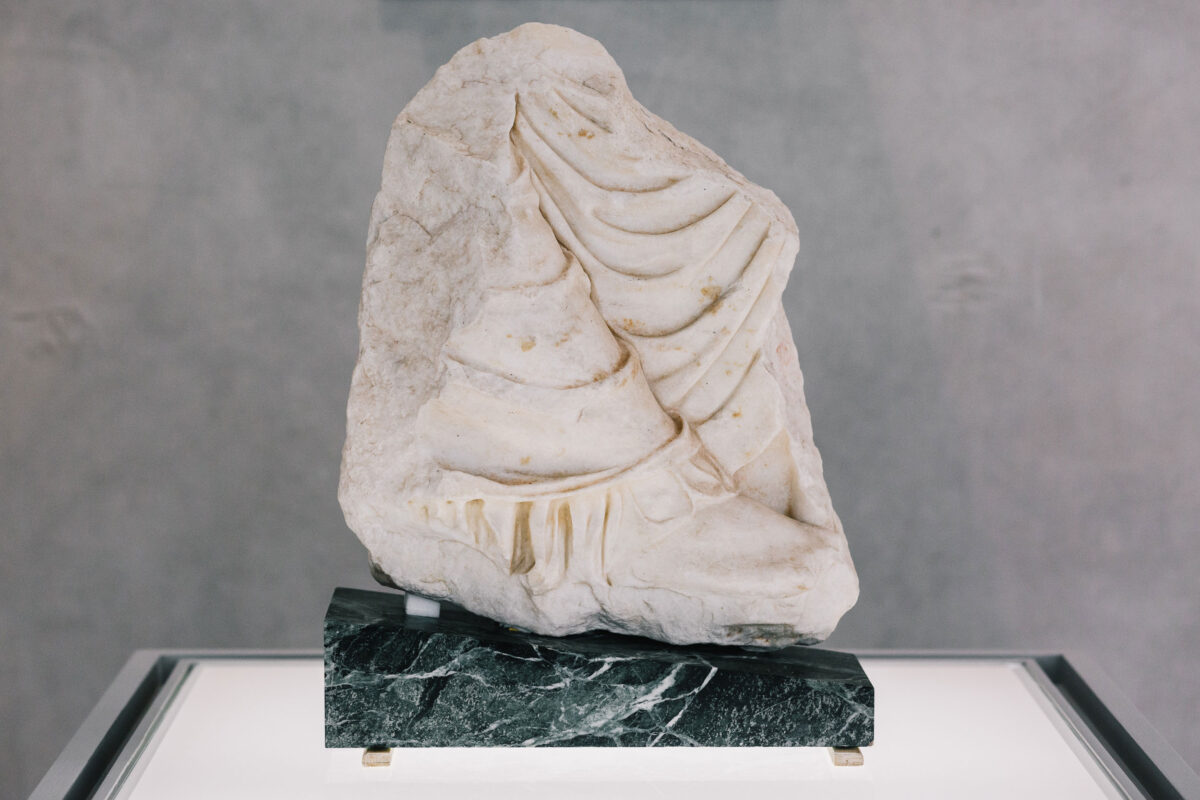 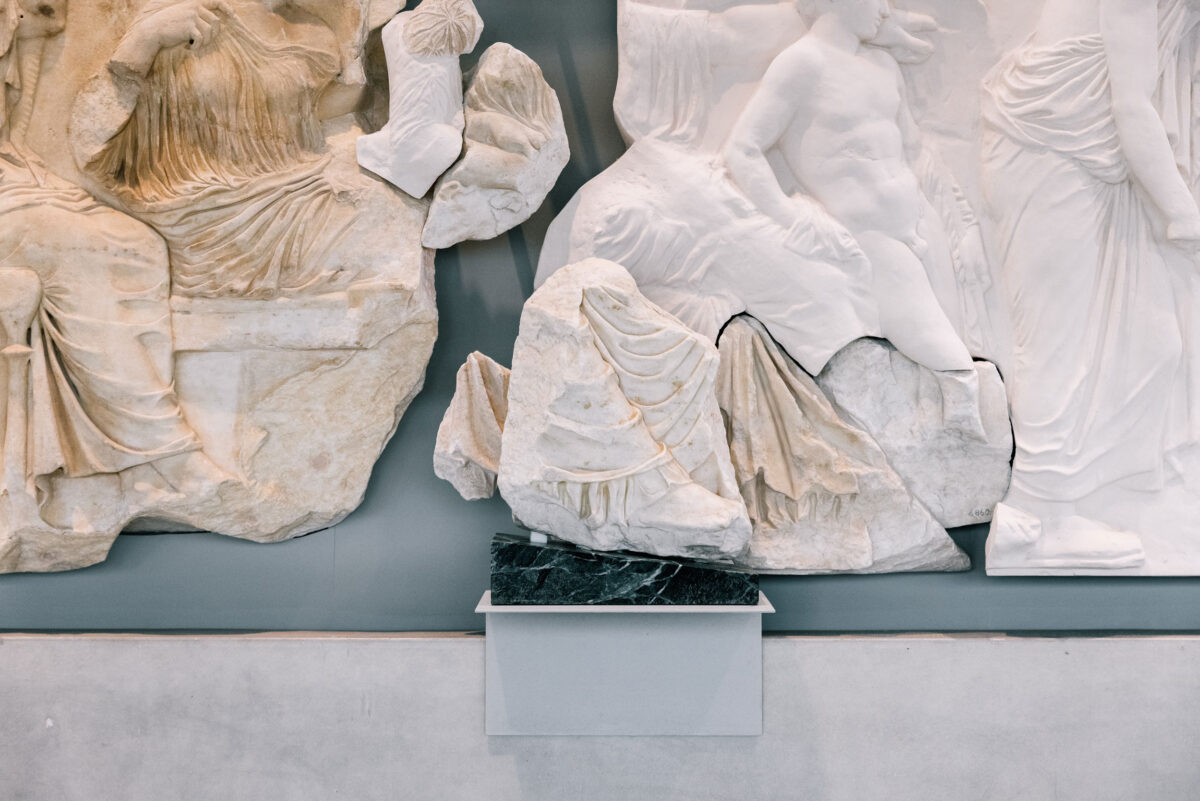 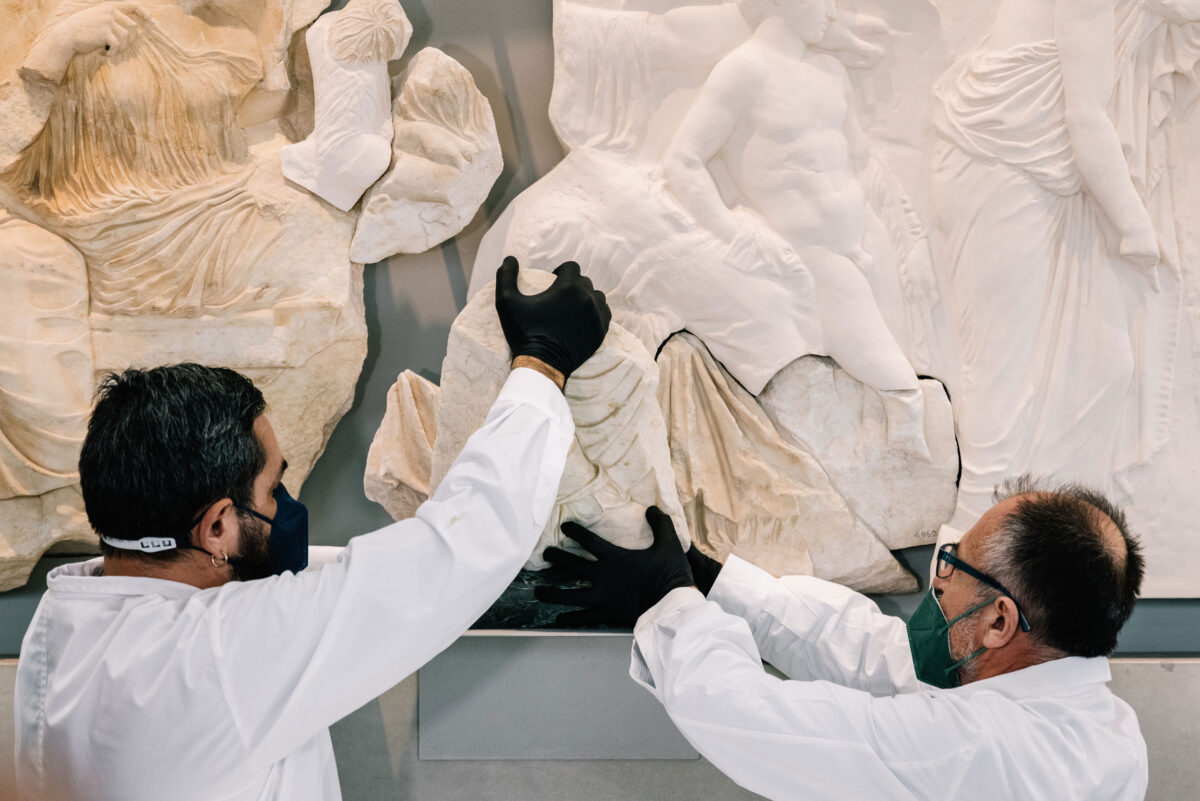 The Acropolis Museum received the renowned “Fagan fragment” for at least eight years, from the Antonino Salinas Museum in Palermo. The significance of this return does not lie in the long-term nature of the deposit of the fragment to the monument to which it belongs, the Parthenon frieze at the Acropolis Museum, but in the prospect of remaining here permanently (sine die), following the initiative launched by the Independent Regional Authority of Sicily towards the Italian Ministry of Culture.

This piece belongs to block VI of the east frieze of the Parthenon that portrays the seated gods of Olympus watching the Panathenaic procession and the presentation of the woven veil (peplos) to Athena, the city’s patron goddess. The fragment depicts the legs’ extremities of Artemis, goddess of hunting among others, as she is gazing the procession approaching the great temple. The left piece of the stone is in the Museum of the Acropolis while the right is in the British Museum. The fragment, 0.355m high, 0.31m wide and 0.105m thick, belonged to the collection of Robert Fagan, British Consul in Sicily and Malta, purchased by the University of Palermo between 1818-1820. It came into the possession of the Antonino Salinas Museum in 1836. From 2008 to 2009, via a loan, it returned to Greece for the first time, as part of the “Nostoi” exhibition at the Acropolis Museum.

The fragment was temporarily placed in a special showcase in the Parthenon Gallery, and will remain there until its adaptation on block VI where it belongs, following the appropriate interventions by the Museum’s conservators for its secure attachment.

As stated by Prime Minister Kyriakos Mitsotakis: “I believe that the significant step being taken today opens the way for other museums to proceed in the same direction. The most important of these, of course, being the British Museum, which should now realize that the time has come for the Parthenon marbles that left Greece in conditions known for the most part, to return here, to their natural home”.

Minister of Culture and Sports Lina Mendoni said: “Pheidias’s creation radiates incomparable power, perfection and beauty. Humanity is entitled to see this unique composition of Creation, Freedom and Democracy in its entirety. The international community is entitled and demands to see this masterpiece of art in its entirety, reunited here at the Acropolis Museum, and not divided up between Athens and London.

“It is not however only public opinion across the world that demands the reunification of the Parthenon sculptures. The mutilated monument itself demands the return of its architectural sculptural members, to regain its indivisible physical, aesthetic and semantic entity. The return of the Parthenon Sculptures to Athens is a moral obligation for the whole of Europe, as part of the protection of its common cultural heritage. And the greatest force for their reunification is the belief of Europeans themselves, as well as the British citizens, in the importance of the Parthenon, this greatest monument of European culture.”

President of the Acropolis Museum, Dimitris Pantermalis pointed out: “It seems that the sculpture fell from its place on the monument and was found at the foot of the Parthenon with the bombings of Morosini or with the bombings of the siege of Athens. If we compare it with the other parts of the frieze, what is important is that it has the best preserved surface. In all other cases the surface has been slightly scraped. Here it has retained the initial freshness of the antique itself and for that we are proud. A third point is the friendly attitude of the Assessore and the Ephorate in handling this delicate issue. I am particularly  gratified because instead of meeting behind closed doors we found friends in Sicily, and ancient Sicily was part of ancient Greece. We will be very happy to keep in contact and I believe that the marbles, rather than being a point of conflict, can become a point of progress, study and prominence.”

Director General of the Acropolis Museum Nikos Stampolidis said: “The piece being received here today to take the place to which it has eternally belonged, bears the foot of Artemis, so that it can be reunited with the rest of the goddess’s body. This joining together of the divine body elevates to the same level our Sicilian friends’ act of granting us here today the fragment from the Antonino Salinas Museum in Palermo.”

Director of the Antonino Salinas Museum Caterina Greco noted: “Today is a very important day, both for culture and for me personally. First of all, the reunification of the “Fagan plaque” with the other fragments by Pheidias on display in this majestic museum seals, to the highest degree possible, the feelings of brotherhood and cultural identity that for centuries have connected Sicily with Greece. As it has already been said, we hope that this “return” to Greece, to Athens, will soon be finalized and that the memory of a gesture that wishes to be one of friendship and mutual recognition will be preserved forever, beginning from this moment we are all experiencing today.”

As Counselor for Cultural Property and Sicilian Identity Alberto Samona stated: “The intention of the Sicilian regional government, as you know, is for the fragment to remain indefinitely in Athens, and that is why, at the request of the Sicilian Region to the Italian Ministry of Culture, for over a year now the file has been opened with which we ask that this intention of ours be realized. The words of appreciation and support expressed in previous days by Minister of Culture Dario Franceschini and Deputy Minister of Culture Lucia Borgonzoni make us hope for the final positive outcome of this plan.In the coming days we will celebrate in Sicily the arrival from Athens of the renowned statue of the goddess Athena, which will come to us to be admired by the public at the Salinas Museum. Far more than being just an exchange, this is a symbolic gesture between our two countries: On behalf of President of Sicily Nello Musumeci, the Sicilian Government, the whole of Sicily and myself, I would like to thank Minister Lina Mendoni, who from the outset accompanied us on this path that led us to the point we are today.”