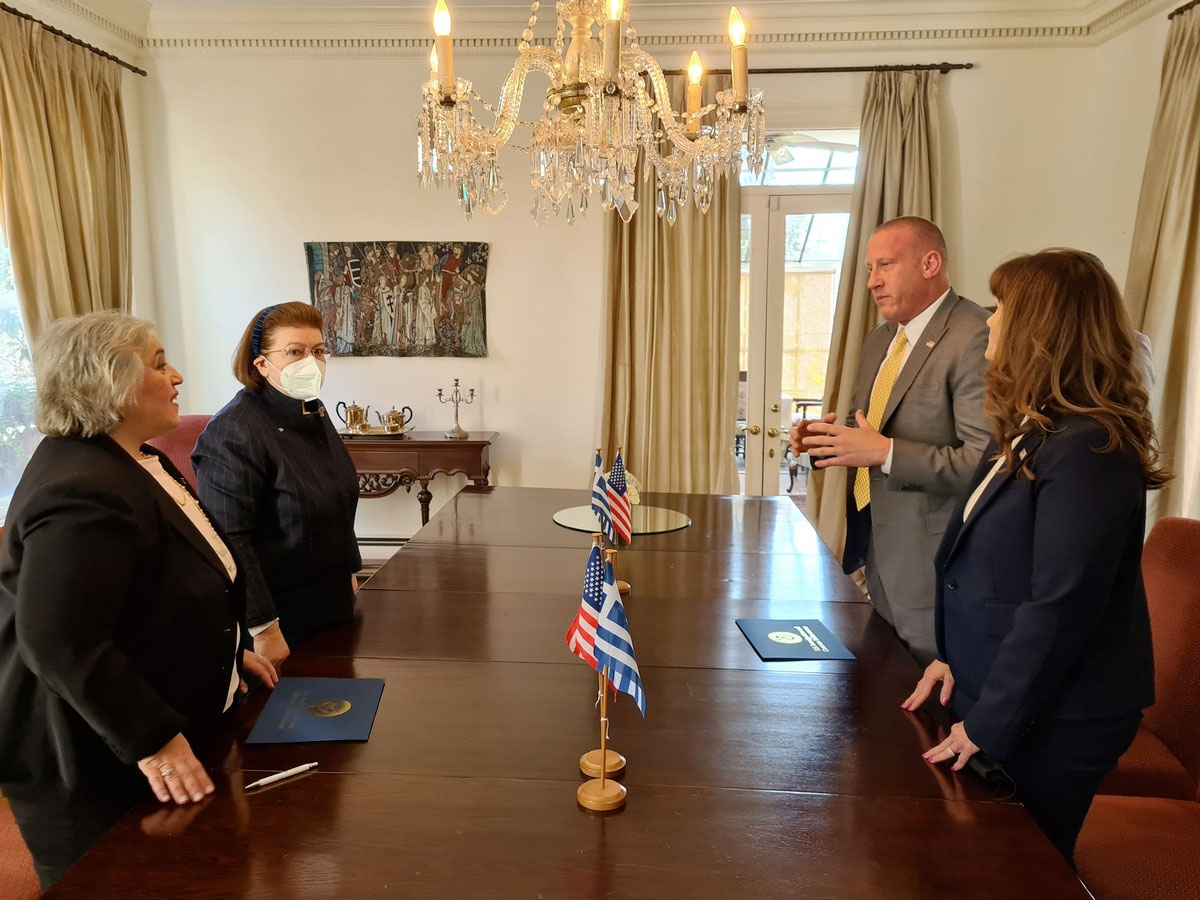 Two more ancient artefacts have been repatriated to Greece

A piece of gold jewelry and a silver spear tip

Two more ancient artefacts, a piece of gold jewelry stolen from the Komotini Archaeological Museum and a silver spear head, were handed over in a modest ceremony to Minister of Culture and Sports Lina Mendoni by the head of the US Department of Homeland Security David Magdycz at the Greek Embassy in Washington.

During the handover ceremony, the Minister of Culture and Sports stated: “Cooperation of the Ministry of Culture’s services with the Homeland Security executives has been excellent and now bears fruit. Today, two antiquities from Greece return to their homeland; a silver spear head and a gold piece of jewelry. The latter is particularly important as it was stolen about 10 years ago from the Museum of Komotini and is now being repatriated. We thank the Ministry of Homeland Security, with which we are already planning the next steps”.

In turn, Head of Homeland Security David Magdycz said: “The United States and the Department of Homeland Security are happy with the repatriation of ancient artifacts to Greece. Cooperation with both the Greek Ministry of Culture and Sports and the Embassy of Greece in the USA is excellent”.

In February 1993, the piece of jewelry was found by a farmer on the beach of Ancient Strymi in Imeros, Rodopi and he handed it over to the Archaeological Museum of Komotini. In 2012-2013 it was stolen from the Museum and the Directorate for Documentation and Protection of Cultural Property reported the case to Interpol. A photo of the stolen jewelry was posted on the international database of stolen cultural property kept by Interpol.

In February 2019, while inspecting the electronic catalogue of a gallery based in Louisville, USA, the piece of gold jewelry from the Komotini Museum was found among the antiquities on sale. It had been matched as a pair with a similar item, with an estimated sale price of $2,000-3,000. The catalogue mentioned that the pieces of jewelry had turned up in Belgium in the 1960s, had been bought by a French collector and from there had ended up in a collection on the East Coast of the USA. This information proves how easily the provenance  of an ancient artefact can be altered by its traffickers.

The Ministry of Culture requested the assistance of the Interpol Office for the item of jewelry to be withdrawn from the auction, confiscated by the competent American authorities and returned to Greece, based on its documentation as a product of illegal trafficking. The excellent cooperation between the Ministry of Culture’s Services, the Prosecutor’s Office of Rodopi, Interpol, the Consulate General of Greece in Los Angeles, the Greek Embassy in Washington and the US Homeland Security Service resulted in the ancient piece of jewelry being confiscated and repatriated to Greece. It is already here and has temporarily been handed over to the National Archaeological Museum for safekeeping.

The second item, also handed over to Minister of Culture and Sports Lina Mendoni by the head of the US Department of Homeland Security, was an epidoratis, that is, the “head” of a spear. In 2012, the HSI office in Austin, Texas, began investigating the illegal sale of antiquities through a US website. The investigation identified the silver spear head as Greek, illegally imported into the US in December 2007, and purchased by a collector at a souvenir shop. The analysis of the epidoratis by an expert from Buffalo State University showed that, given the artefact’s typology and its erosion, and based on a radiogram, it is an archaeological find from Greece. The spear head confiscated by the US federal authorities is already in Greece.