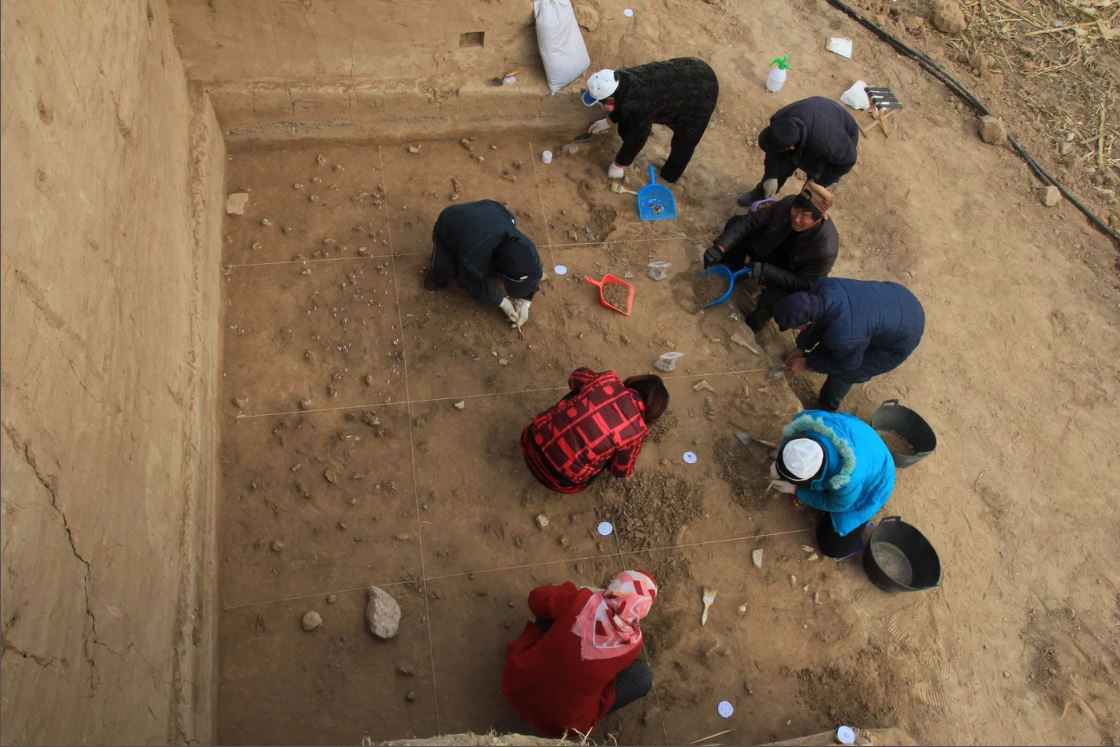 In the Nihewan Basin of northern China

When did populations of Homo sapiens first arrive in China and what happened when they encountered the Denisovans or Neanderthals who lived there? A new study in Nature by an international team of researchers opens a window into hunter-gatherer lifestyles 40,000 years ago. Archaeological excavations at the site of Xiamabei in the Nihewan Basin of northern China have revealed the presence of innovative behaviors and unique toolkits.

The discovery of a new culture suggests processes of innovation and cultural diversification occurring in Eastern Asia during a period of genetic and cultural hybridization. Although previous studies have established that Homo sapiens arrived in northern Asia by about 40,000 years ago, much about the lives and cultural adaptations of these early peoples, and their possible interactions with archaic groups, remains unknown. In the search for answers, the Nihewan Basin in northern China, with a wealth of archaeological sites ranging in age from 2 million to 10,000 years ago, provides one of the best opportunities for understanding the evolution of cultural behavior in northeastern Asia.

A new article published in the journal Nature describes a unique 40,000-year-old culture at the site of Xiamabei in the Nihewan Basin. With the earliest known evidence of ochre processing in Eastern Asia and a set of distinct blade-like stone tools, Xiamabei contains cultural expressions and features that are unique or exceedingly rare in northeastern Asia. Through the collaboration of an international team of scholars, analysis of the finds offers important new insights into cultural innovation during the expansion of Homo sapiens populations.

“Xiamabei stands apart from any other known archaeological site in China, as it possesses a novel set of cultural characteristics at an early date,” says Dr. Fa-Gang Wang of the Hebei Provincial Institute of Cultural Relics and Archaeology, whose team first excavated the site.

“The ability of hominins to live in northern latitudes, with cold and highly seasonal environments, was likely facilitated by the evolution of culture in the form of economic, social and symbolic adaptations,” says Dr. Shi-Xia Yang, researcher with the Chinese Academy of Sciences and the Max Planck Institute for the Science of Human History, in Jena, Germany. “The finds at Xiamabei are helping us to understand these adaptations and their potential role in human migration.”

One of the significant cultural features found at Xiamabei is the extensive use of ochre, as shown by artefacts used to process large quantities of pigment. The artefacts include two pieces of ochre with different mineral compositions and an elongated limestone slab with smoothed areas bearing ochre stains, all on a surface of red-stained sediment. Analysis by researchers from the University of Bordeaux, led by Prof. Francesco d’Errico, indicates that different types of ochre were brought to Xiamabei and processed through pounding and abrasion to produce powders of different color and consistency, the use of which impregnated the habitation floor. Ochre production at Xiamabei represents the earliest known example of this practice in Eastern Asia.

The stone tools at Xiamabei represent a novel cultural adaptation for northern China 40,000 years ago. Because little is known about stone tool industries in Eastern Asia until microblades became the dominant technology about 29,000 years ago, the Xiamabei finds provide important insights into toolmaking industries during a key transition period. The blade-like stone tools at Xiamabei were unique for the region, with the large majority of tools being miniaturized, more than half measuring less than 20 millimeters. Seven of the stone tools showed clear evidence of hafting to a handle, and functional and residue analysis suggests tools were used for boring, hide scraping, whittling plant material and cutting soft animal matter. The site inhabitants made hafted and multipurpose tools, demonstrative of a complex technical system for transforming raw materials not seen at older or slightly younger sites.

A Complex History of Innovation

The record emerging from Eastern Asia shows that a variety of adaptations were taking place as modern humans entered the region roughly 40,000 years ago. Although no hominin remains were found at Xiamabei, the presence of modern human fossils at the contemporary site of Tianyuandong and the slightly younger sites of Salkhit and Zhoukoudian Upper Cave, suggests that the visitors to Xiamabei were Homo sapiens. A varied lithic technology and the presence of some innovations, such as hafted tools and ochre processing, but not other innovations, such as formal bone tools or ornaments, may reflect an early colonization attempt by modern humans. This colonization period may have included genetic and cultural exchanges with archaic groups, such as the Denisovans, before ultimately being replaced by later waves of Homo sapiens using microblade technologies.

Given the unique nature of Xiamabei, the authors of the new paper argue that the archaeological record does not fit with the idea of continuous cultural innovation, or of a fully formed set of adaptations which enabled early humans to expand out of Africa and around the world. Instead, the authors argue that we should expect to find a mosaic of innovation patterns, with the spread of earlier innovations, the persistence of local traditions, and the local invention of new practices all taking place
in a transitional phase.

“Our findings show that current evolutionary scenarios are too simple,” says Professor Michael Petraglia of the Max Planck Institute in Jena, “and that modern humans, and our culture, emerged through repeated but differing episodes of genetic and social exchanges over large geographic areas, rather than as a single, rapid dispersal wave across Asia.”