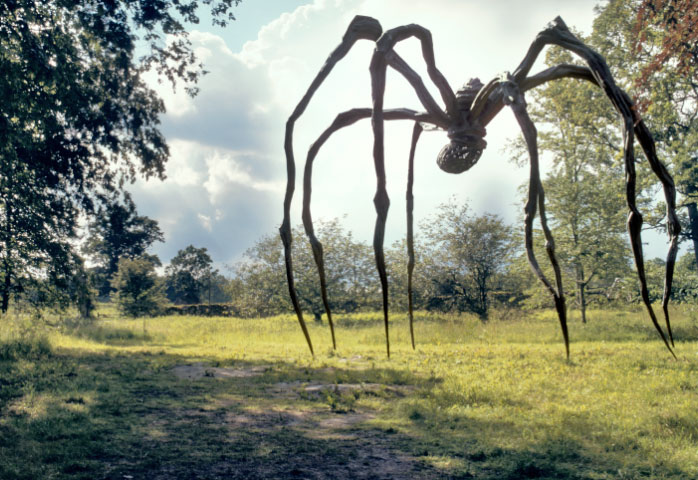 The largest mother spider by Louise Bourgeois at the SNFCC

Louise Bourgeois’s giant spider Maman had to travel more than 2.5 thousand kilometers from the Serralves Museum of Contemporary Art in Porto, with the collaboration of  the cultural organization NEON, to reach the Esplanade of the Stavros Niarchos Foundation Cultural Center where it is being hosted.

Thanks to the cooperation of the two organizations whose common goal is to exhibit art in public spaces and with a generous programme being offered to both children and adults by the Stavros Niarchos Foundation, the Greek public will have the opportunity for the next seven months to explore and interact with the work of the emblematic American-French sculptor Louise Bourgeois (1911-2010). Although the great artist worked for decades, her work gained attention and wide recognition only when at the age of 71 she became the first female sculptor whose retrospective exhibition was hosted at the MOMA in New York.

The ten-meter-high bronze and steel structure, with eight legs and twenty marble eggs in its belly-cage, was commissioned in 2000 by Tate Modern. It is the largest of a series of steel spiders that Bourgeois began constructing in 1994, almost fifty years after making her first spider design in 1947.

In every public space they have been placed, whether in America and Europe, Louise Bourgeois spiders fascinate the public. According to the interpretation given by the director of NEON Elina Kountouris at the on-site unveiling of the installation, this is due “not only to the monumental size and the spooky realism of the works, but perhaps also because they invite us to face primordial fears, the struggles and ways in which we relate to the social sphere. Through her art, Louise Bourgeois expressed her deepest thoughts and fears. She handled her problems and gave shape to her emotions: her engravings, drawings, textiles, installations and sculptures for which she became best known, explore issues of guilt, fear, memory, motherhood and love. Maman also reflects the ambiguous, contradictory and complex emotions surrounding her own experience of motherhood.”

As Louise Bourgeois herself has said: “I failed as a wife, woman, mother, hostess, artist, businesswoman, friend, daughter, sister, but I did not fail in the search for the truth”.