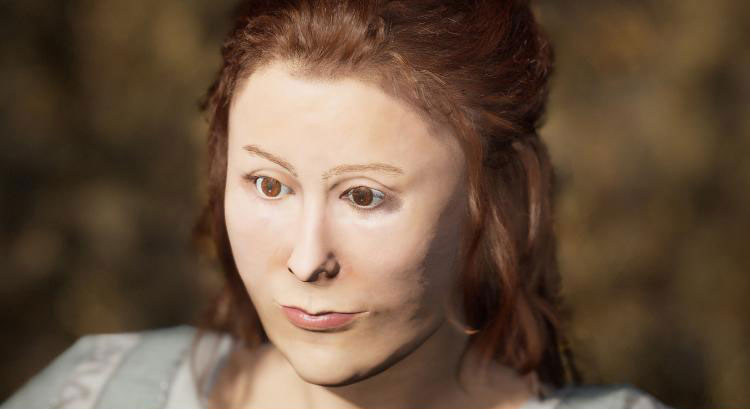 Αppearance of inhabitants of Upper Lusatia from 400 years ago recreated

The skulls were found in Göda, western Saxony

The bust of an elderly man and digital images of a young woman and a young man are the results of research conducted on human skulls found in an early medieval stronghold. The appearance of the former inhabitants of Upper Lusatia was recreated by anthropologists, archaeologists and visual artists.

The three reconstructions were made by the team of Professor Barbara Kwiatkowska from the Wroclaw University of Environmental and Life Sciences in collaboration with visual artists from the Academy of Art and Design in Wroclaw. One female and two male skulls were found in Göda, western Saxony.

“Radiocarbon dating of human remains showed that the cemetery in the yard of the stronghold functioned between the end of the 15th century and the beginning of the 17th century, when the stronghold was already abandoned. The older man’s appearance has been recreated in the form of a full, realistic bust. The reconstruction of the appearance of the young man and the young woman was done digitally. Upon discovery almost a century ago, these burials were thought to date from the early Middle Ages. That is why we included them in our research project that concerns the Polish-German border 1,000 years ago. This allowed to verify their chronology. It turned out that these graves were much younger than previously thought. This is another example that it is worth it to re-analyse past archaeological discoveries with modern research tools”, explains Dr. Paweł Konczewski, an archaeologist from the Wroclaw University of Environmental and Life Sciences.

The reconstructions are presented at the City Museum in Budziszyn at an exhibition devoted to the period of the early Middle Ages in Upper Lusatia – a geographic and historical region located today on both sides of the Polish-German border. The exhibition was prepared as part of the Polish-German scientific and educational project “1000 years of Upper Lusatia – the people, the forts, the cities”.