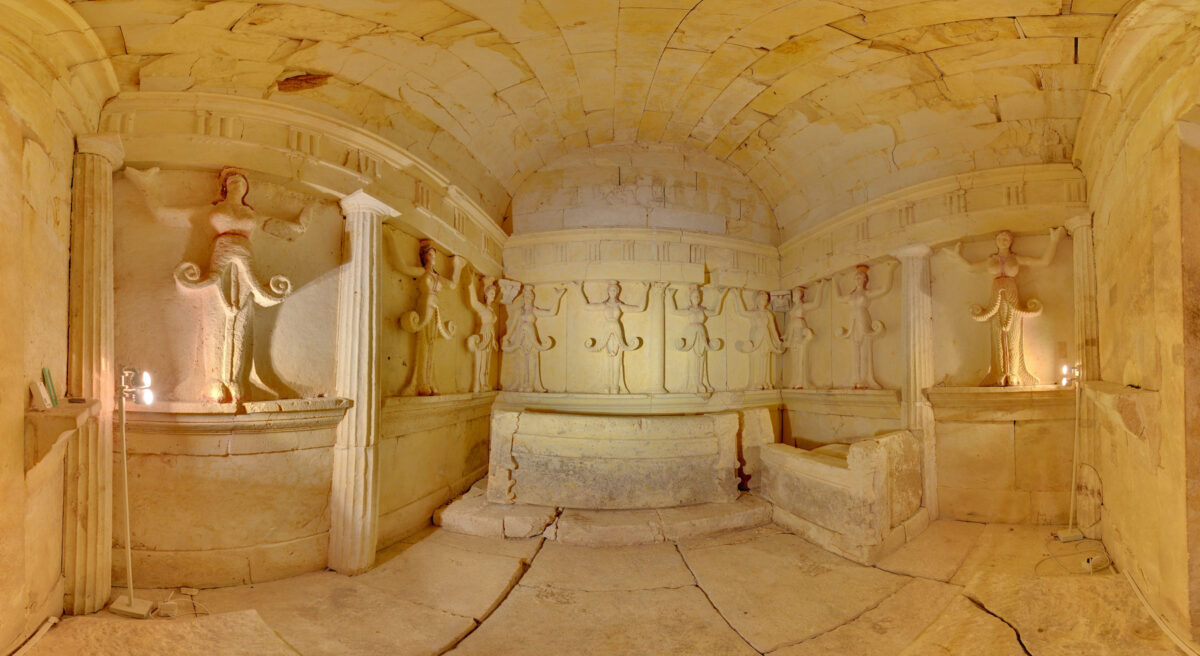 The newly renovated Thracian burial mound near Sveshtari in northeastern Bulgaria has recently been unveiled. The restoration work was made possible with the assistance of the US Ambassadors Fund for Cultural Protection (AFCP), which provided over 330,000 Bulgarian leva for the preservation of this cultural treasure, as it has been designated by UNESCO. The goal is for future generations to admire the monument, according to a press release from the US Embassy in Sofia.

The Thracian  burial mound of Sveshtari, located 2.5 km southwest of the village of Sveshtari, near the town of Razgrad, is a unique example of Mediterranean burial architecture. It attracts around 50,000 visitors every year.

The tomb was built in the 3rd century B.C. to house the bones of a rich ruler of the tribe of the Getae, buried there with his horses. It is noteworthy that in the interior the burial chamber is surrounded by 10 Caryatids (sculptured columns depicting a female figure), whose chitons are in the shape of a reversed palmette. This type of sculpture is not found in the area.

“The restoration gives visitors the opportunity to see this masterpiece of Thracian burial architecture in a new light” Emilia Germanova, director of the Historical Museum in Isperih, told the Bulgarian News Agency. She explained that in the renovated exhibition space, visitors will find information and facts about the tribes of the Getae who lived in these lands more than two millennia ago, the capital of the Getae kingdom and one of the great rulers of the Getae. Visitors will learn a lot about the  artefacts found in the tomb. Since their renovation, most of these cultural treasures are being exhibited for the first time in the museum’s permanent exhibition.

The royal tomb has now been newly illuminated, and those who visit it will be able through the lights and shadows to follow the guides in the narration of its fascinating history, its past glory, its grandeur and its path to immortality. An animated film shown in the renovated reception center’s exhibit space will make the Getaes’ past more accessible and more understandable to the younger public, added the director of the Isperih Museum. Ms Germanova expressed the belief that with its new lighting, Sveshtari’s tomb will attract more tourists from Bulgaria and abroad.