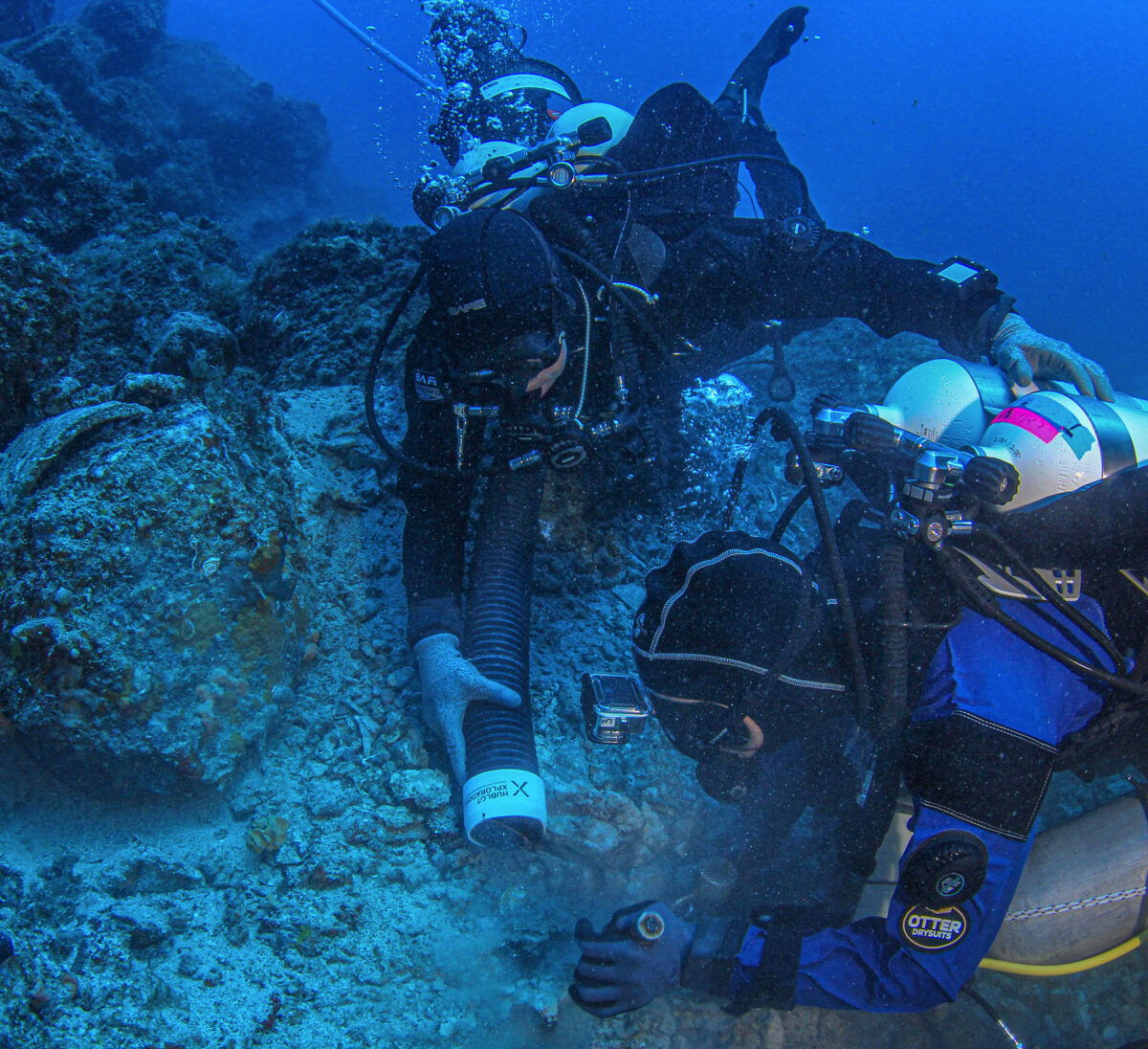 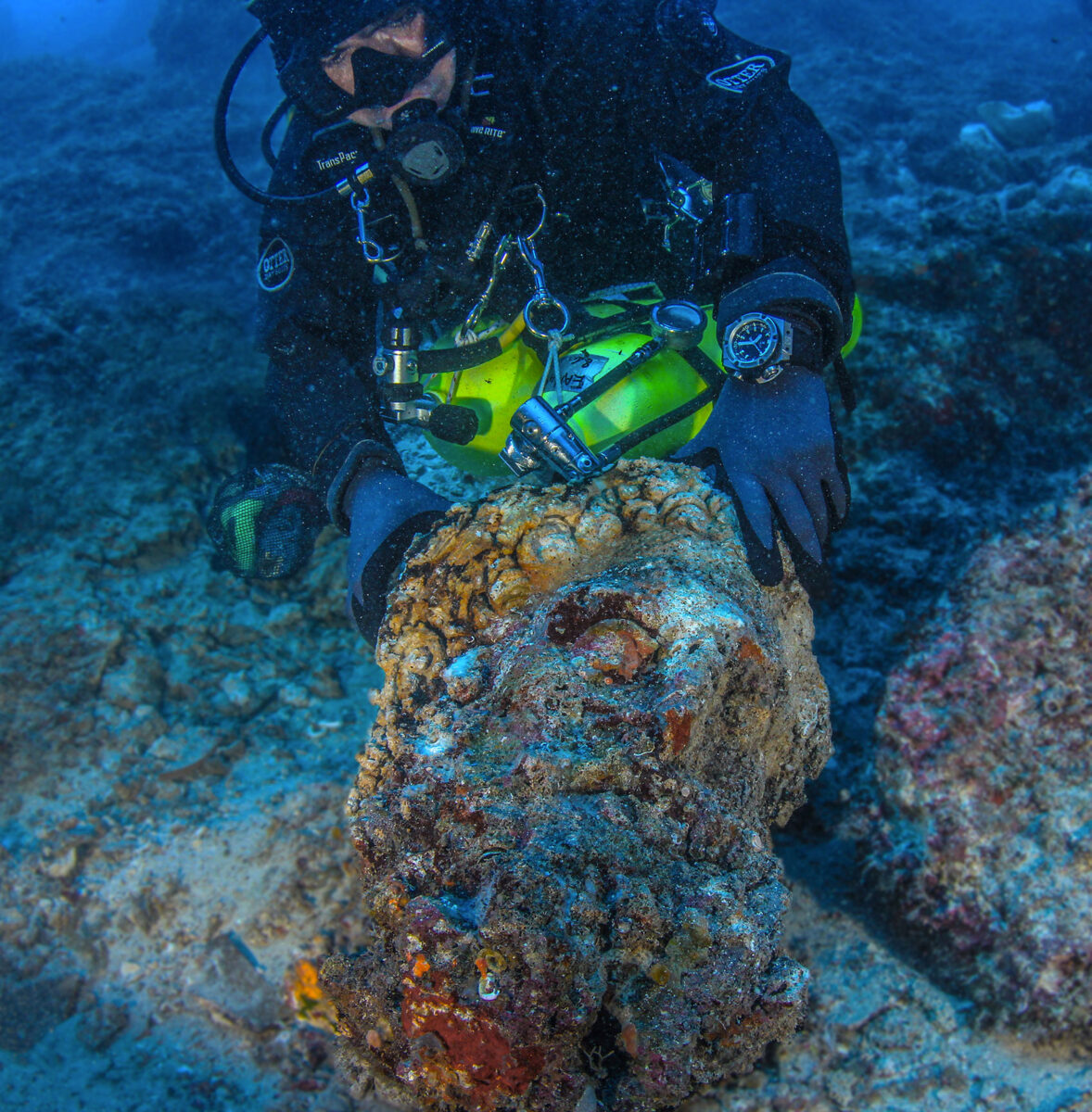 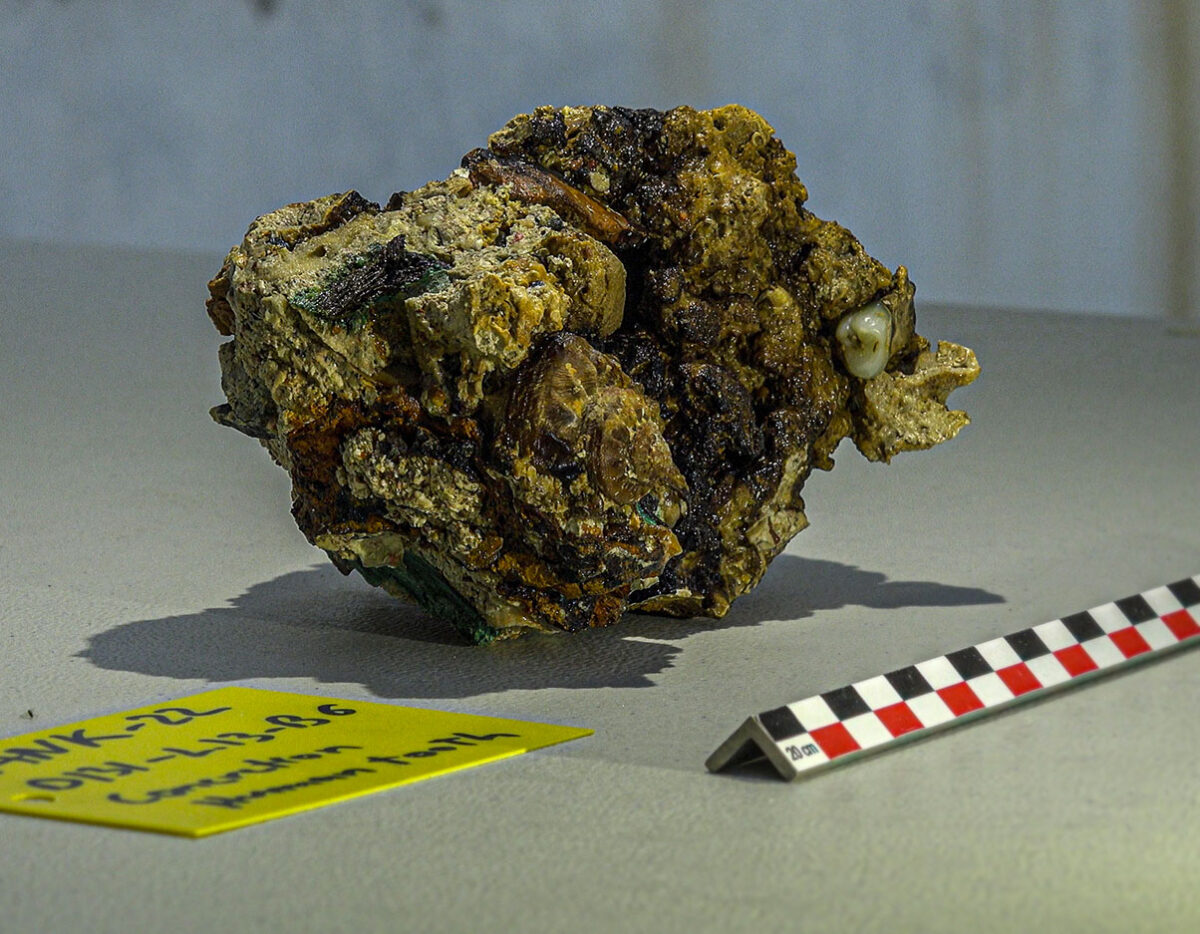 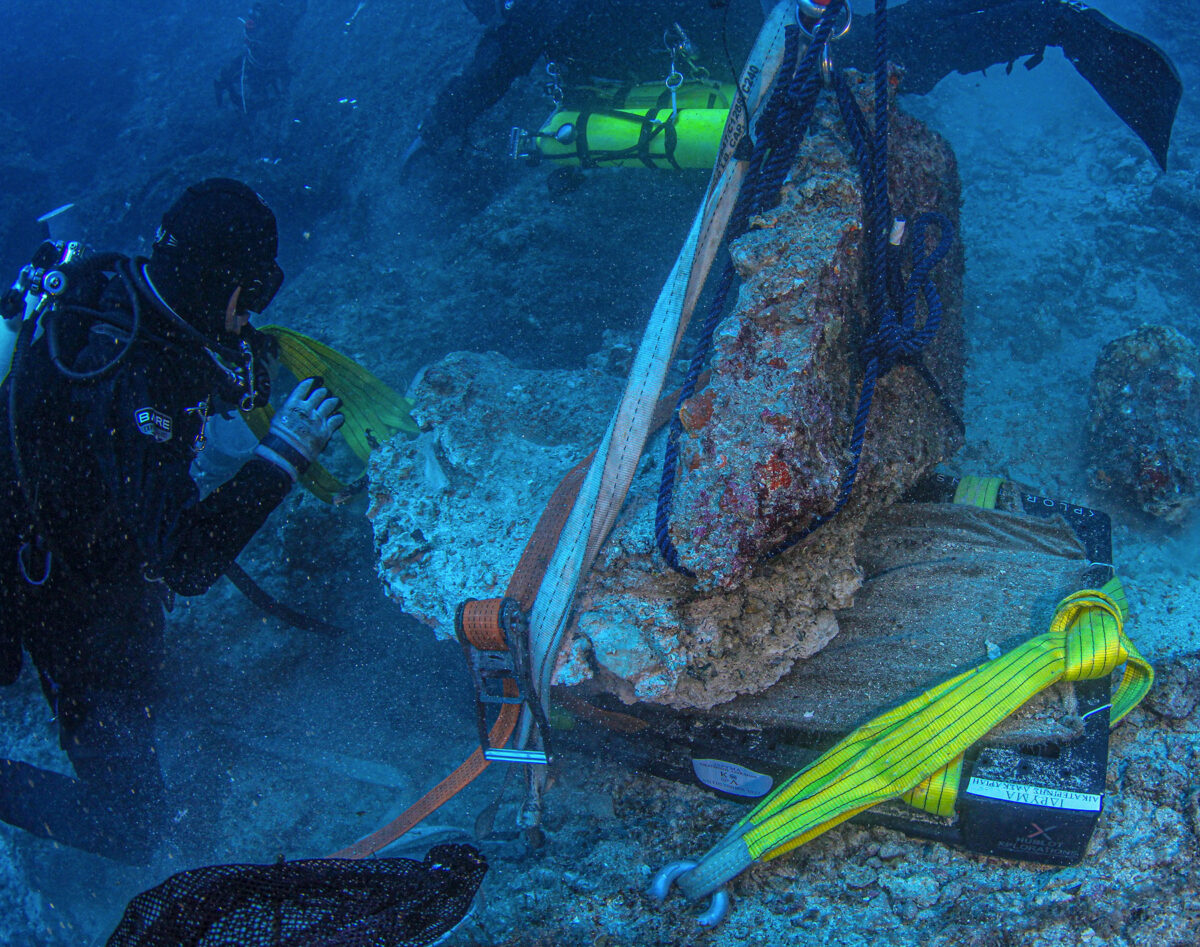 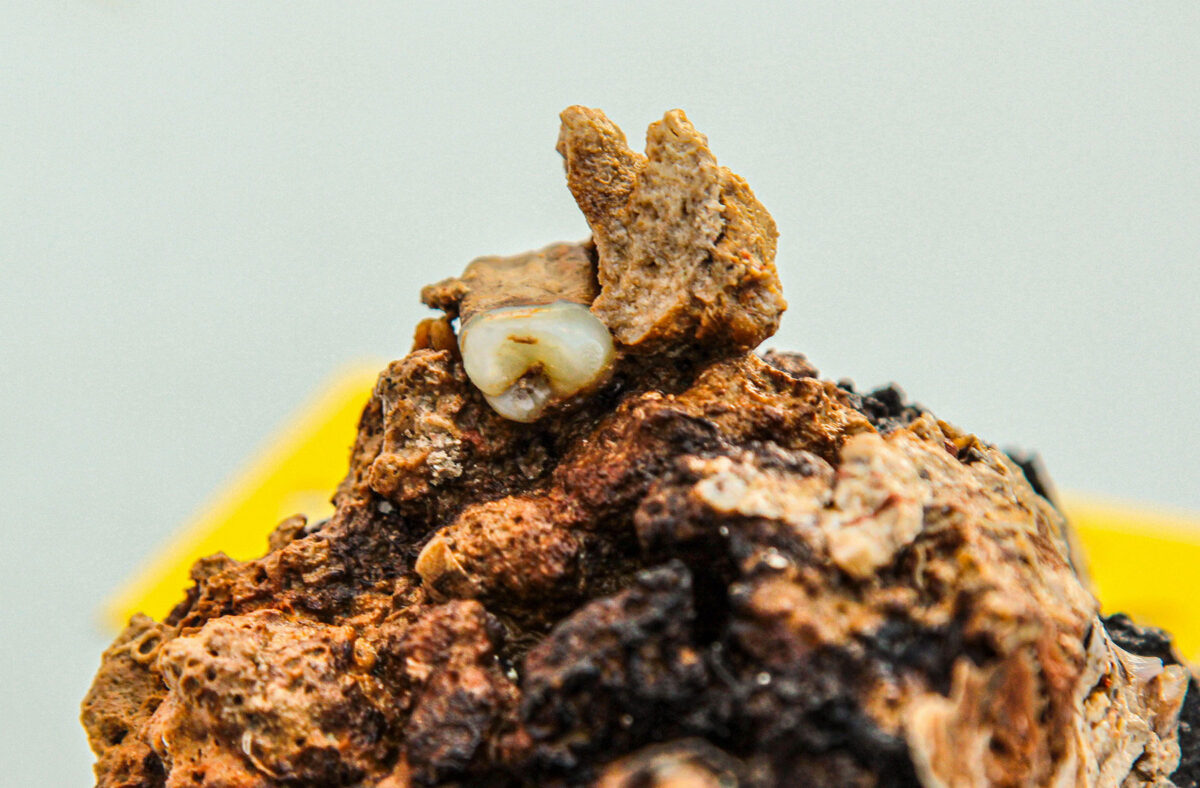 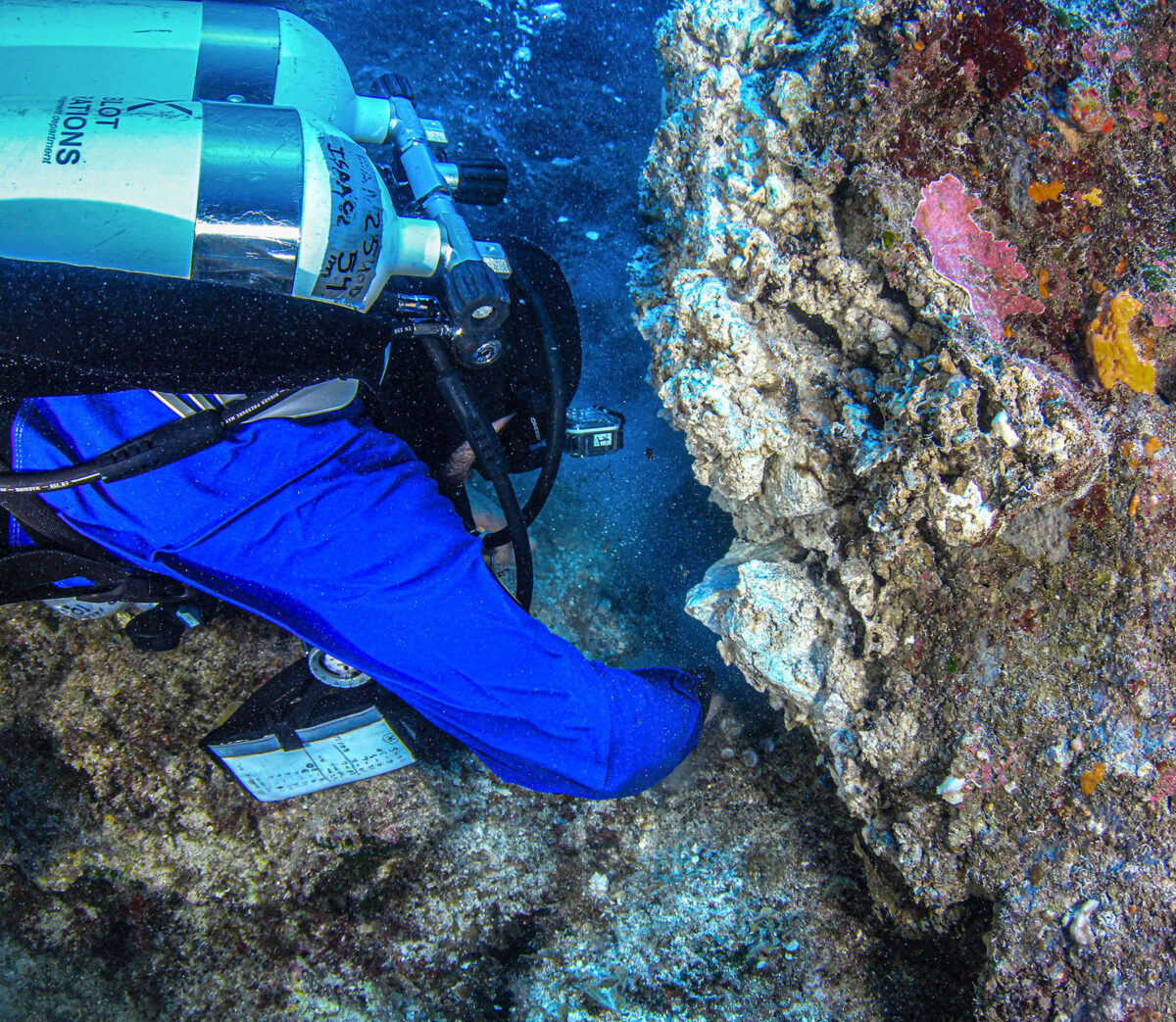 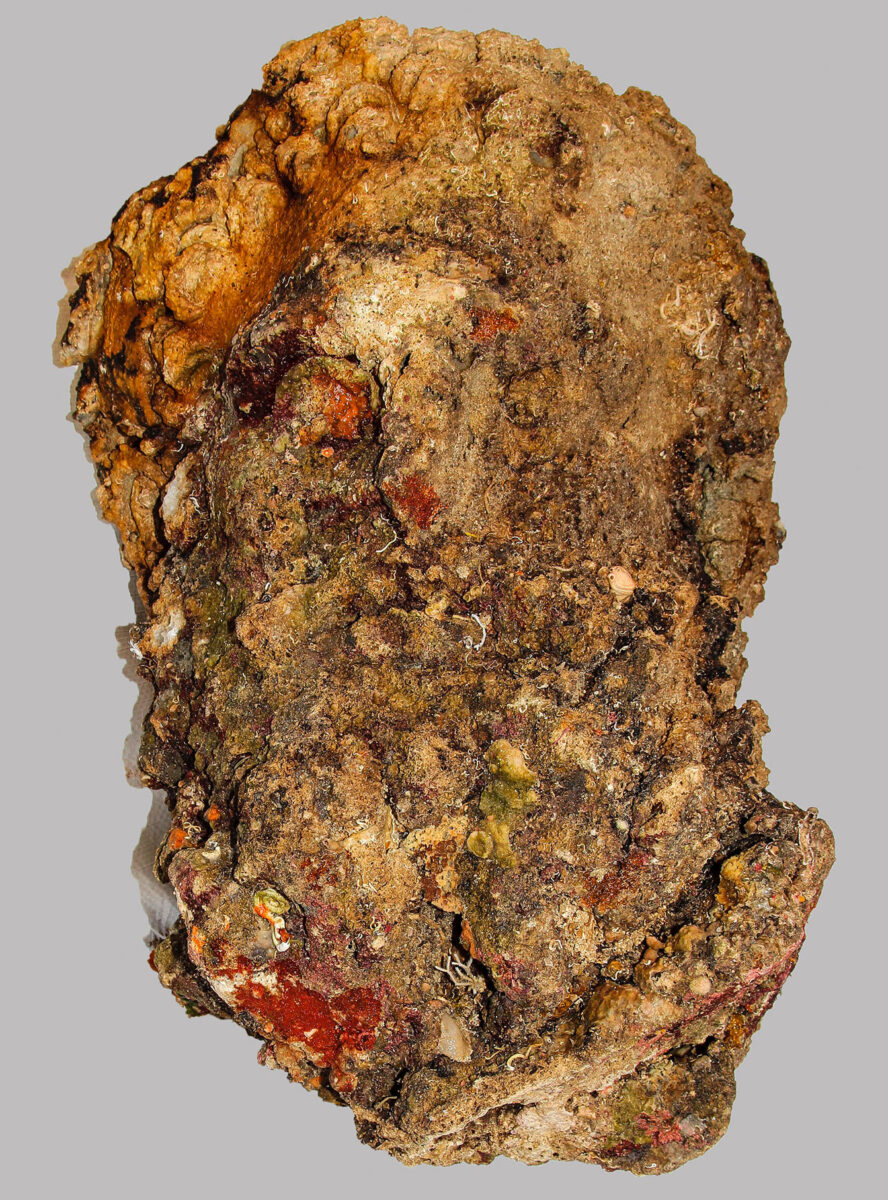 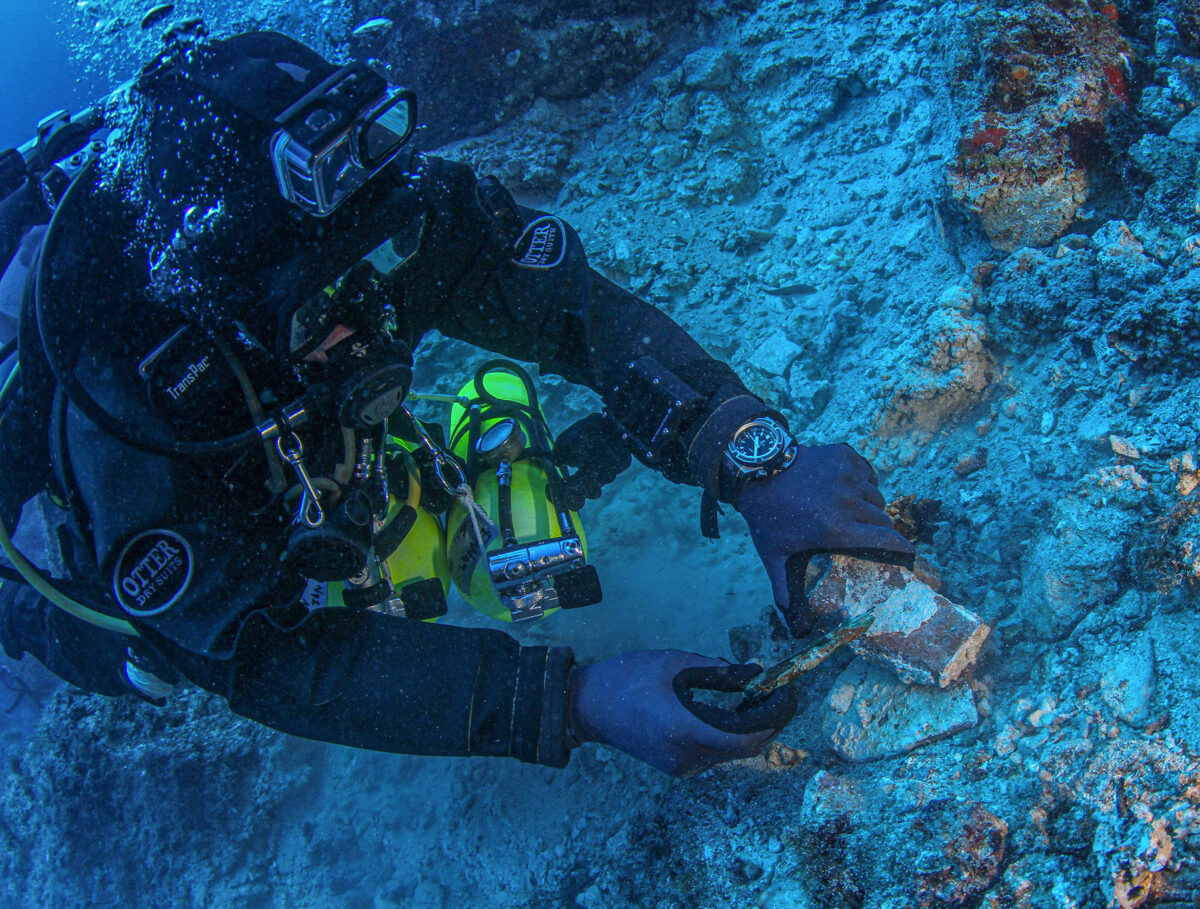 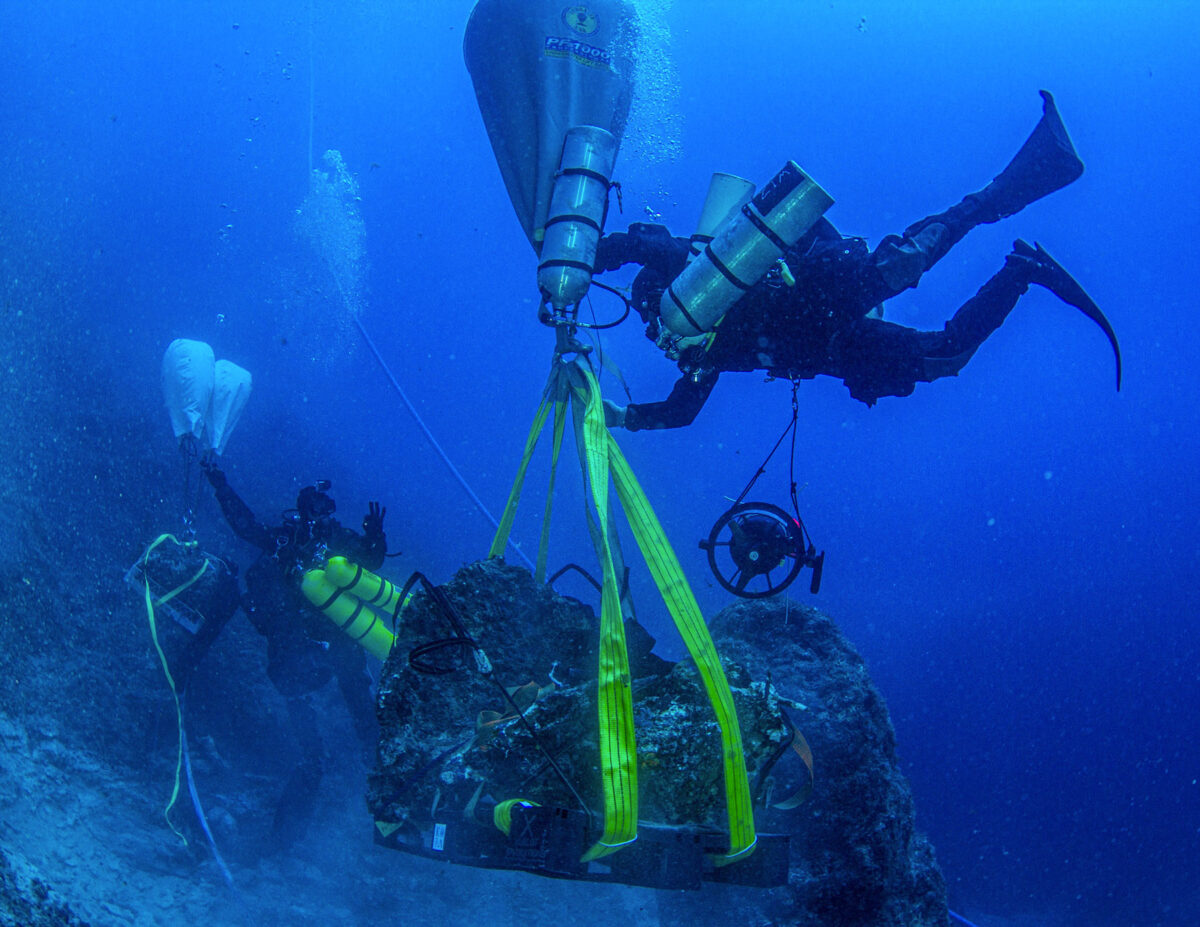 Research conducted by the Swiss School of Archaeology in Greece

The second period of the underwater archaeological research on the Antikythera wreck (May 23-June 15, 2022), within the framework of the 2021-2025 five-year project, yielded rich findings. The research is being conducted by the Swiss School of Archaeology in Greece  under Dr. Angeliki G. Simosi, head of the Ephorate of Antiquities of Euboea, and Lorenz Baumer, Professor of Classical Archeology at the University of Geneva, supervisedby the Ephorate of Underwater Antiquities. The excavation is under the auspices of the President of the Hellenic Republic Katerina Sakellaropoulou.

The mission began with the lifting of massive rocks weighing many tons, which covered part of the wreck. During this phase, special lifting bags were used for bringing up items from the sea bed, with the innovative application of the air filling system from the boat, developed by the team of Hublot Xplorations.

The new findings include:

-The marble base of a statue preserving both of the bare lower extremities of a human figure, covered with a thick crust. For this reason a detailed description is not possible.

-A larger than life marble head of a bearded male figure, which has been tentatively identified as the demigod Hercules of the Farnese type, the so-called “Hercules of Antikythera”. It is likely to belong to the headless statue no. 5742 in the National Archaeological Museum, salvaged by sponge fishers in 1900.

-The big surprise comes from the finding of two human teeth on a solid agglomerate with traces of copper, which through its genetic material will help determine the gender and other genetic characteristics of the person to whom they belonged.

-Numerous items from the ship’s structural elements, such as copper and iron nails, as well as the leaden stock of wooden anchor, but also amorphous metal masses covered by a hard marine crust which conceal their secrets, and can only be investigated through xrays to locate  any possible existing symbolic representations.

The antiquities were safely transported from Antikythera to the facilities of the Ephorate of Underwater Antiquities, properly packaged according to the instructions of the Conservation Department of the Ephorate.

In addition to the research directors, the mission included Carlo Beltrame, professor at the University of Venice, and Dr. Elisa Costa, a researcher at the same university, Dr. Orestis Manousos, and Dr. Isaac Ogloblin, Alexandros Sotiriou, a collaborating researcher at the University of Geneva, who ran the field operation, and divers Haris Mitrou, Nikos Giannoulakis and Dimitris Romios. Also participating were members of the Special Diving Team of the Submarine Missions Unit of the Hellenic Coast Guard, Aris Machairidis, Dimitris Hatziaslan, Dimitris Kiosis and George Lytrivis.

For the underwater research and excavation, diving wascarried out by specialized  personnel, using a mixed gas diving apparatus. Assisting in the diving project, apart from those of the Coast Guard, were the scientific and technical staff of the research and development department of Hublot and the special ship TYPHOON, provided by the Athanasios K. Laskaridis Public Benefit Foundation.

The diving effort was supported by the Typhoon crew coordinated by retired Rear Admiral Alexandros Palatianos and by the Hublot Xplorations team with Mathias Buttet, Michel Blumenthal, Aloïs Aebischer and Diego Carven. The research was supervised by Ekaterini Tagonidou, diving architect of the Ephorate of Underwater Antiquities.

The Faculty of Sciences of the University of Geneva (Laboratory of Crystallography and Department of Earth Sciences) provided laboratory equipment for on-site analyzes.

The main sponsors of the research are the Ekaterini Laskaridis Foundation and the Swiss watchmaker Hublot. The research was also supported by the Swiss Nereus Research Foundation, founded with the main purpose of supporting the Antikythera project, and Cosmote Telecommunications as the research’s communication sponsor.

Thanks are due personally to Panos Laskaridis and the Mayor of Kythera Efstratios Charchalakis, for their continuing support of the archaeological survey. The residents of Kythera and Antikythera are also firm supporters of the project, concludes the press release by the Ministry of Culture and Sports.