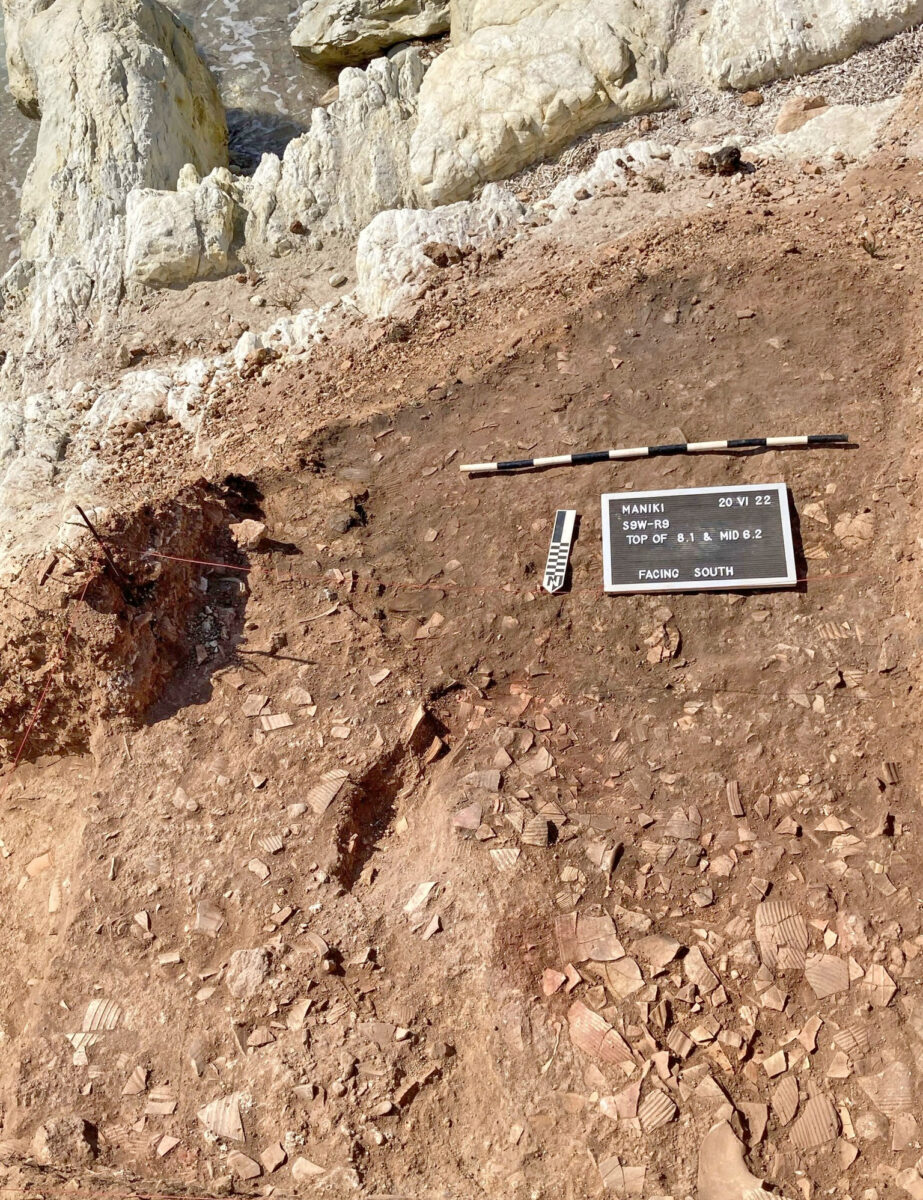 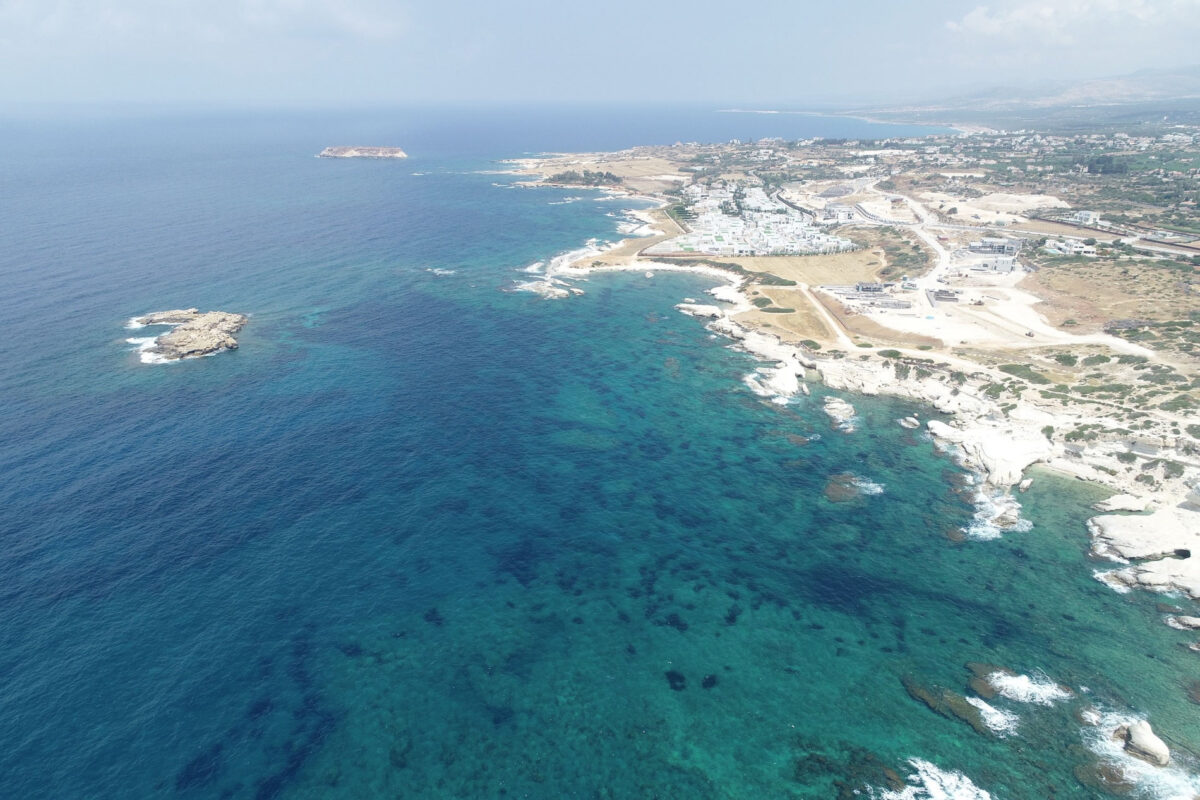 The Department of Antiquities, Ministry of Transport, Communications and Works announces the completion of the three-month survey, excavation, and study session of the New York University’s Yeronisos Island Expedition at Maniki Harbor and at the greater Cape Drepanum area, under the direction of Dr. Joan Breton Connelly, Professor of Classics at NYU. Archaeological surveys and excavation were conducted on land and underwater, together with coastal mapping and 3D modelling, and a comprehensive study of excavated materials in preparation for publication.

The small ‘pocket harbor’ of Maniki is a unique site, an ancient landscape that served as the main port for accessing the ancient settlement at Agios Georgios tis Pegeias and Yeronisos Island itself from the Hellenistic through to the Byzantine period. The harbor, island, and rugged mainland coast of Cape Drepanum form a rare, naturally beautiful, and culturally significant ‘maritime small world’.

Maritime archaeologists Dr. Theotokis Theodoulou, from the Ephorate of Underwater Antiquities, Head of the Department of Crete, Dr. Alexandros Tourtas, Post-doctoral Researcher at the University of the Aegean, Ioannis Ktistakis, diver-illustrator for the Ephorate of Underwater Antiquities, Dept. of Crete, and Christos Pasalides, Chief Diver of the mission, executed coastal and underwater surveys of Maniki Harbor, including aerial mapping, 3-D modelling, video-recording, snorkeling and reconnaissance diving.

Using DPVs (Diver Propulsion Vehicles), the team completed the underwater survey from north of the Agios Georgios Harbor to as far south as the Sea Caves area, covering more than 12,200 meters. At the very western tip of Yeronisos, the team surveyed down to a depth of 30m. Orthophotomaps have now been created for the entire area of Cape Drepanum, stretching from south of Maniki Harbor to the Aspros River bed at the north. The small port at Maniki clearly provided the most convenient and safe location for anchoring, loading, and unloading cargoes as witnessed by the rock cut channels and bollards, pottery and anchors at the area. While intense use is attested for the harbor during Late Roman/Early Byzantine times, Hellenistic pottery recovered in the terrestrial survey and stone anchors possibly dating as early as the 2nd millennium B.C. suggest that it was used as a significant anchorage from much earlier on.

An international team of scholars, as well as graduate and undergraduate students from New York University, took part in the multi-disciplinary program of excavation and research. Prof. Jolanta Mlynarczyk of the University of Warsaw continued her study of Hellenistic and Early Roman pottery and lamps while Monika Miziolek from the Polish Academy of Sciences, focused on the Roman cooking pottery. Dr. Mariusz Burdajewicz, University of Warsaw, continued his study of the Hellenistic and Early Byzantine glass. Dr. Stella Demesticha, Associate Professor of Maritime Archaeology at the University of Cyprus, began her comprehensive study of the vast material of late Roman amphorae at the shores of Maniki Harbor. Preliminary observations show that the majority of vessels belong to the type Late Roman 1 (LR1). Macroscopic inspection of the fabric indicates that most of these amphorae were of local Paphian manufacture but sporadic imports were also noted. Fragments of other types were significantly less and mainly belong to two Levantine Late Roman amphora types: LR3 (or ‘Gaza’ type) and LR4/5 (or Palestinian bag -shape type). Most of these types can be dated to the 6th century A.D. Careful stratigraphic documentation provides an opportunity to gain insights into seaborne trade mechanisms during the Late Roman period, when the role of Cyprus in the international trade networks of the eastern Empire is well attested.

Archaeozoologist Dr. Paul Croft, Manager of the Lemba Archaeological Research Centre, continued his study of the animal bones recovered by the project and undertook excavations throughout the season. Dr. Efthymia Nikita, Assistant Professor of Bioarchaeology at The Cyprus Institute, and Mahmoud Mardini, PhD candidate at the Cyprus Institute began their study of the human skeletal remains.

Architect Pieter Brouke, Professor of the History of Art and Architecture and Director of the Arts, Middlebury College, continued his study of the limestone architectural blocks and mouldings recovered from Yeronisos Island. Philip Ebeling, PhD candidate at Westfälische Wilhelms-Universität Münster, began his comprehensive study of the assemblage of Hellenistic roof tiles excavated on Yeronisos from 1992 to 2006.