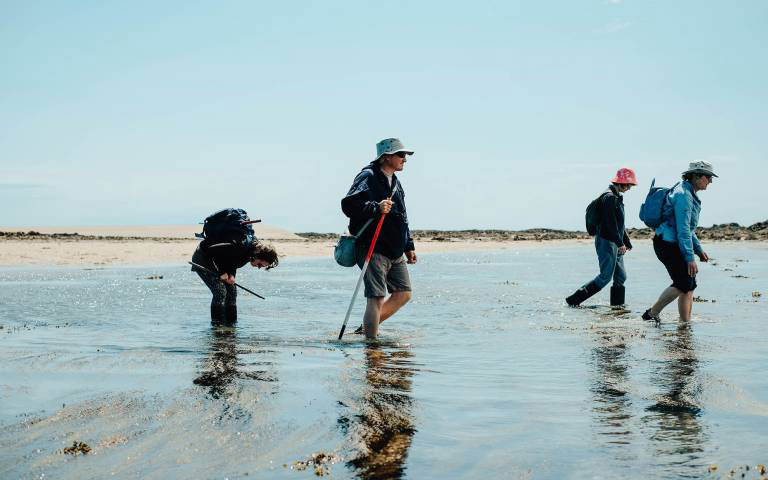 Hunting for Neanderthal spear tips under the sea

A UCL-led team of archaeologists found spear tips and other stone tools that have been submerged under the English Channel since the last ice age, providing new clues about our Neanderthal past.

Submerged below the waves of the English Channel lies an important scientific record of undiscovered Neanderthal artifacts dating back to the last ice age. Collecting them from beneath the channel’s cold waters is no easy feat, but UCL researchers found a way to get a brief peek at the otherwise hidden landscape.

In May, when tides dropped to their lowest levels of the year, a team of archaeologists led by Dr Matthew Pope (UCL Archaeology) searched the briefly exposed seabed for stone artifacts left behind by Neanderthal people tens of thousands of years ago, as part of a project funded by the British Academy and Leverhulme Foundation. To take full advantage of the short tidal window, they camped in an isolated, 18th century stone tower perched more than a mile offshore from the Island of Jersey.

When the tides fell, the team emerged from their refuge to scour the exposed rocky reef for spear tips and other stone tools dating to an age when Neanderthal people and woolly mammoths could walk from Kent to Calais.

Though the English Channel has divided Britain from continental Europe throughout recorded history, it hasn’t always been the barrier it is today.

When Neanderthal people lived in northern Europe between about 400,000 and 40,000 years ago, Earth was in the midst of a series of climate change cycles that brought about several ice ages. During the coldest periods, the Arctic ice sheet extended well beyond the Arctic circle, at times reaching nearly as far south as London. At these greatest extents, so much of Earth’s water was tied up in this icepack that ocean levels were many meters below what they are today. The English Channel was dry, and herds of mammoths and bison freely wandered where fish swim today.

Scientists can get an idea of what the English Channel’s prehistoric landscape might have looked like by analysing today’s seabed. The Island of Jersey would have been a plateau rising above a rocky, textured landscape. Undulating gullies and crevices that today are packed with sediments were once covered in shrubs and grass, providing food and navigable routes for roaming animals.

Dr Pope and his team theorised that Neanderthal people likely took advantage of the landscape’s complicated geography to hunt, ambushing and cornering game that navigated through the terrain’s natural routeways. He and his team found butchered remains of mammoth, reindeer and bison in nearby caves, but it was unclear whether the region around Jersey was actually used as hunting grounds. Today, many of the stone artifacts that could shed light on these ancient people’s behaviour are engulfed by the sea.

“Most of these rocky landscapes are too deeply submerged for us to carry out normal archaeology,” Dr Pope said. “We’d have to dive or use robotic submarines. It’s very difficult to find this kind of fragile evidence using those kinds of techniques.”

However, a section of the Channel off the coast of Jersey offered the team a chance to get a close look at the seafloor, if only for a few brief interludes. The area known as the Violet Bank is a shallow granite reef that just peeks out of the water during particularly low tides. During these brief intertidal windows, the temporary landscape extends more than four kilometres out from the coast. Though only exposed for a few hours a day at the most, it’s the best opportunity to survey within the region and look for prehistoric artifacts.

Because of the tight windows, the team needed to be as efficient as possible with their short time at the Violet Bank, but traversing out from the shore every day risked wasting much of their brief intertidal interval. Fortunately, Jersey Heritage, a partner in the project, had a dry spot for them to stay more than a mile out from the island’s coast: Seymour Tower.

Fortress on the water

Built in the late 18th century, Seymour Tower was one of a series of coastal fortifications constructed around Jersey to protect it from French attackers. Perched atop a rocky outcrop more than a mile away off the Jersey coast, the imposing granite edifice rises isolated out of the shallow channel waters during high tide.

But during particularly low tides, the sea retreats far enough for anyone staying there to walk far out across the coastal plain. It was the perfect spot for Dr Pope and his team to camp in to reach the fleeting seabed.

“It meant that we were in that landscape,” Dr Pope said. “As soon as the tide started to fall, we could emerge from the tower right into the middle of that landscape and then take different transects and different directions looking for artifacts and recording sediments.”

“It’s not like anything I’ve ever done. This was far more extreme because we were staying out in a tower that at high tide was just surrounded by the sea,” said Letty Ingrey, “It’s just you in this tiny little world with the rest of your team.”

On the most dramatic nights of the project, a powerful electrical storm blew in over the Violet Bank.

“It was an amazing thunderstorm,” Ingrey said. “It was just incredible being out there with these flashes of lightning going through the sky.”

The fortification’s thick walls and lightning tower kept the team safe and dry.

“The tower itself is quite cosy,” Dr Pope said. “It’s got a fire, it’s got a kitchen, we ate well, it had electricity from solar panels, so it felt quite self-sufficient. It was a wonderful environment to work in.”

Racing against the tide

Rustic amenities aside, the real draw was Seymour Tower’s remote location in the middle of the tidal plain. Dr Pope and his team timed their expedition so to align seasonally with the lowest and longest low tides. Each day, they had between about four and five hours of safety where they could walk throughout the temporarily dry landscape to survey the area and search for artifacts.

“We had to plan every single day in terms of how far we were going to move, what time were we going to start retreating, and come up with achievable targets for each day,” Dr Pope said. “The tide is just something you can’t negotiate with.”

The team depended on local knowledge. For safety, they brought with them guide Nicky Mansell to keep them one step ahead of the encroaching tide. They also relied on information gleaned from local expertise to point their artifact hunt in the right direction.

“We knew there were artifacts in that landscape because people from Jersey, who know that landscape intimately, had shown us a few, but this was the first time we’d systematically gone looking for them and recorded their position,” Dr Pope said.

For four days the team ventured out from the tower as the surrounding waters fell, setting out in different directions each day looking for evidence of ancient peoples. For a few short, intense hours, they scanned the ground hunting for evidence of stone tools, augured into underlying clays to date the sediments, and flew drones overhead to map the region.

“We found there were artifacts out there. Some of those artifacts were clearly neo-palaeolithic, that’s the technology that’s used by Neanderthal people,” Dr Pope said. “A couple of them were tools that showed us the kinds of activities that were taking place out there.”

Of the two dozen or so artifacts recovered by the team, one of the most significant was a Levallois point, a kind of spearhead typically used for hunting by Neanderthal people.

“It’s amazing when you find stuff like that,” Ingrey said. “Someone dropped this tens or hundreds of thousands of years ago. It’s really possible this was lost during a hunt.”

The find is a clear sign that Neanderthal people used the region for hunting and that there are likely more artifacts still out there. Moreover, the project served as an overall proof of concept that safe and meaningful archaeological work was possible on these coastal plains during their brief intertidal windows.

Already the team is looking ahead to future efforts to hunt for more evidence of Neanderthal habitation.

“This was a pilot project,” Dr Pope said. “We’re back to developing a longer-term project that can take advantage of low tides over three or four years to not only record that entire reef, but also to make some initial inroads to some other reefs in the English Channel region.”