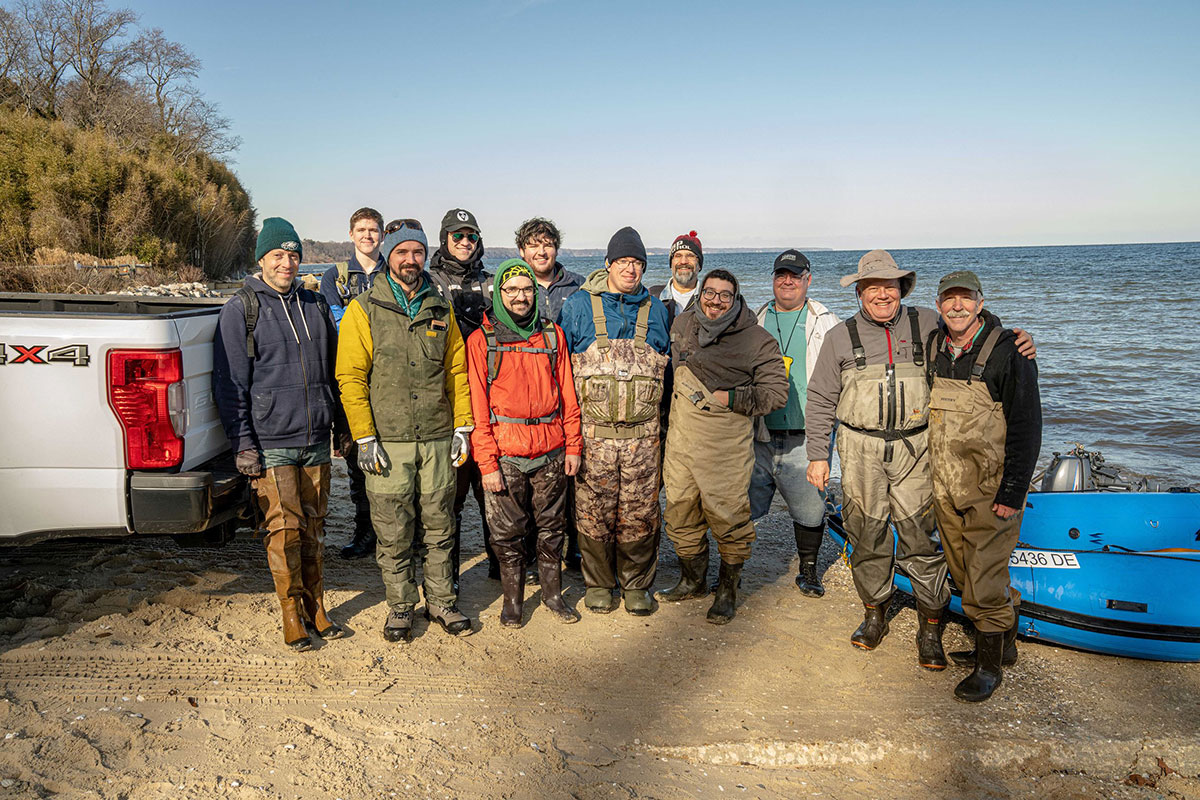 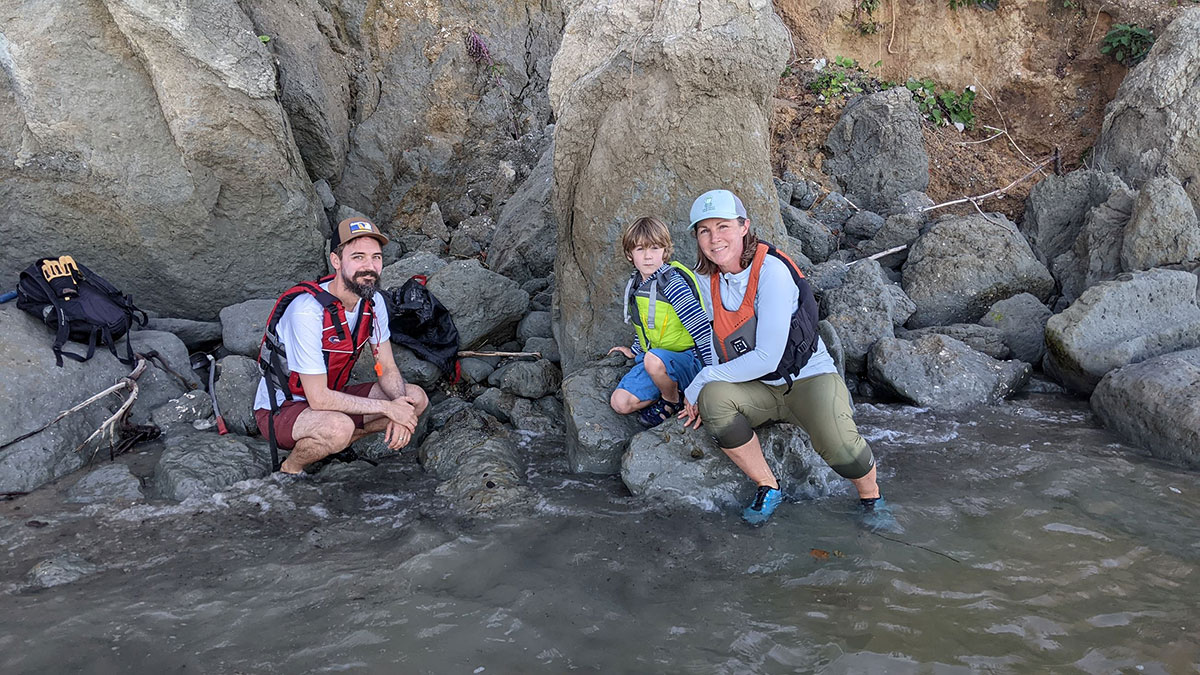 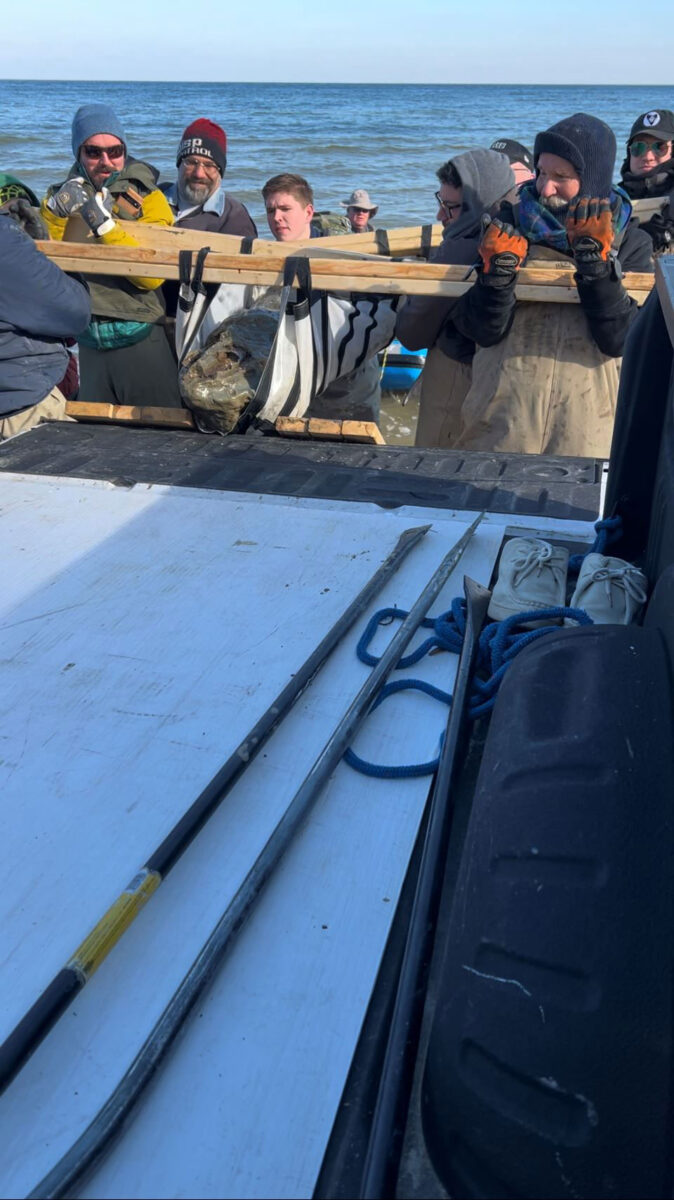 While combing Matoaka Beach for fossils and shark’s teeth, Pennsylvania resident, Cody Goddard, made a fascinating discovery. A large hardened block of sediment laying on the beach had an unusual fossil protruding from one end (Photo 1). After further investigation, Goddard realized that he had stumbled upon a Miocene fossil whale skull. He then reached out to Dr. Stephen Godfrey, Curator of Paleontology at the Calvert Marine Museum (CMM), who confirmed, by way of a video text that the fossil encased in the sediment was indeed a whale skull and quickly made the trip to visit the fossil’s location in person.

Moving the 650 lb. block of sediment safely from the beach to the museum was no small task. Godfrey and team devised a plan to extract the sediment from the beach first by small pontoon boat, then by truck (Photo 2) to CMM’s Fossil Preparation Lab, which is located in the Paleontology Hall inside the museum. The extraction took place Monday, December 19th with a team of paleontology enthusiasts (Photo 3), including Goddard, who traveled down to share in the excitement. Godfrey said, “It felt like we had won the World Cup of Paleontology! We are so blessed to have so many avocational and professional paleontologists, locally.”

“We don’t yet know what species of Miocene baleen whale this is,” says Godfrey, “that we will only know once it has been prepared. It might even prove to be our greatest preparation challenge, depending on how indurated the entombing sediments are.” The skull, affectionately christened “Cody,” is the most complete fossil whale skull ever recovered from that section of Calvert Cliffs.

The unprepared “raw” fossil skull can be seen on a blue hydraulic cart in the museum’s Fossil Preparation Lab. Air scribe-like tools (like miniature jackhammers) will be used to delicately remove the very hardened sediments that encase most of the skull. That process, undertaken by our volunteers, will take many months. Once the bones that make up the top of the skull are uncovered, we should then be able to identify it, if it is a currently known species of Miocene baleen whale.