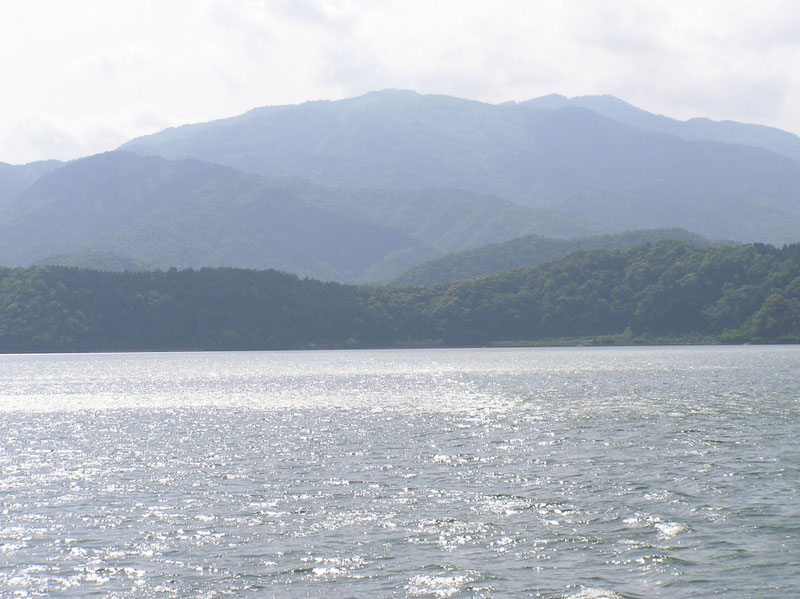 A new series of radiocarbon measurements from Japan’s Lake Suigetsu will give scientists a more accurate benchmark for dating materials, especially for older objects, according to a research team that included Oxford University’s Radiocarbon Accelerator Unit.

The research team extracted cores of beautifully preserved layers of sediment, containing organic material (such as tree leaf and twig fossils), from the bottom of the Japanese lake where they had lain undisturbed for tens of thousands of years. As an article in the journal Science explains, the findings are hugely significant because they provide a much more precise way to examine radiocarbon ages of organic material for the entire 11,000-53,000-year time range. For example, archaeologists should now be able to pinpoint more accurately the timing of the extinction of Neanderthals or the spread of modern humans into Europe.

At the Oxford Radiocarbon Accelerator Unit, Professor Christopher Ramsey with his doctoral student Richard Staff and chemist Dr Fiona Brock worked with two other radiocarbon laboratories (the NERC facility at East Kilbride, Scotland, and Groningen in the Netherlands) on the radiocarbon record from the lake. This research is part of a large international research team, led by Professor Takeshi Nakagawa of Newcastle University, studying the cores for clues about past climate and environmental change.

Radiocarbon is continuously produced in the upper atmosphere. These roughly constant levels of radiocarbon from the atmosphere are then incorporated into all living organisms. Once the organisms die, the radioactive isotope decays at a known rate, so by measuring the radiocarbon levels remaining in samples today scientists can work out how old things are. However, the complication in the calculation is that the initial amounts of radiocarbon in the environment, which are in turn incorporated into growing organisms, vary slightly from year to year and between different parts of the global carbon cycle.

The radiocarbon in the leaf fossils preserved in the sediment of Lake Suigetsu comes directly from the atmosphere and, as such, is not affected by the processes that can slightly change the radiocarbon levels found in marine sediments or cave formations. Before the publication of this new research, the longest and most important radiocarbon dating records came from such marine sediments or cave formations, but these needed to be corrected. At last, the cores from Lake Suigetsu provide a more complete, direct record of radiocarbon from the atmosphere without the need for further correction.

The cores are unique: they display layers in the sediment for each year, giving scientists the means of counting back the years. These counts are compared with over 800 radiocarbon dates from the preserved fossil leaves.The only other direct record of atmospheric carbon comes from tree rings, but this only goes back to 12,593 years ago. The Lake Suigetsu record extends much further to 52,800 years ago, increasing the direct radiocarbon record by more than 40,000 years.

‘In most cases the radiocarbon levels deduced from marine and other records have not been too far wrong. However, having a truly terrestrial record gives us better resolution and confidence in radiocarbon dating,’ said Professor Ramsey. ‘It also allows us to look at the differences between the atmosphere and oceans, and study the implications for our understanding of the marine environment as part of the global carbon cycle.’

To construct a radiocarbon record from Lake Suigetsu, Professor Ramsey and his colleagues measured radiocarbon from terrestrial plant fragments spaced throughout the core. The research team also counted the light and dark layers throughout the glacial period to place the radiocarbon measurements in time. Many of the layers were too fine to be distinguished by the naked eye, so the researchers used a microscope, as well as a method called X-ray fluorescence that identifies chemical changes along the core.

A record of year-to-year changes in radiocarbon levels in the atmosphere, such as those found in a sediment core, must be ‘anchored’ in time by assigning some part of it an absolute age. The researchers did this by matching the first 12,200 years of their record with the tree-ring data, a well-established record that begins in the present. Ramsey and colleagues also lined up segments of their data with those of other records from the same time periods and found that they generally aligned.

‘This record will not result in major revisions of dates. But, for example in prehistoric archaeology, there will be small shifts in chronology in the order of hundreds of years,’ said Professor Ramsey. ‘Such changes can be very significant when you are trying to examine human responses to climate that are often dated by other methods, such as through layer counting from the Greenland ice cores. For the first time we have a more accurate calibrated time-scale, which will allow us to answer questions in archaeology that we have not had the resolution to address before.’

Generally, researchers use a composite record called IntCal to determine the ages of objects, based on their radiocarbon measurements. The IntCal record uses data from multiple sources, including marine records, stalagmites and stalactites, and tree rings. It is expected that the Suigetsu data will be incorporated into the latest iteration of IntCal, which is due to be released within the next few months.

The detailed report of the research and its findings can be found in the October 19, 2012 issue of Science, a publication of the American Association for the Advancement of Science.