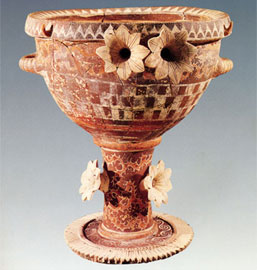 Archaeology, why and wherefore

Archaeology deals with the cultural history of mankind. Prehistoric Archaeology commences with the first appearance of man on earth and is divided into four periods: the Paleolithic period during which man used rough or shaped cobbles or stones, wooden and bone tool-kits, the Mesolithic and Neolithic period during which man started making pottery but without using the wheel.The Age of Metals follows,which ,however, did not appear everywhere simultaneously.

The arts and crafts of metalwork were introduced to Greece from the East.During the Early Bronze age various civilizations developed in the Greek part of the world. The Early Helladic in mainland Greece, the Early Cycladic on the islands and the Early Minoan or Prepalatial civilization on Crete.The Cycladic civilization is a term designating the early Bronze Age in the Cyclads where the stone, Cycladic figurines were found.The Cycladic civilisation is divided into three phases ,the Early Cycladic (3200/3100-2800BC), the Middle Cycladic,( 2000-1450 BC approx.) and the Late Cycladic. Later the term was established to cover the entire Bronze Age in the Aegean islands..During the Bronze Age, around 3000-1100 BC, the Cretans dominated the Mediterranean sea. The famous disc of Phaestos bearing a Linear A inscription, a writing that has not as yet been deciphered, belongs to this period.The development of hieroglyphics and the appearance of the Linear A writing are related to the bureaucracy of the Cretan palaces built in Knossos, Phaestos and Malia around 2000BC. In 1700 BC a sudden disaster either an earthquake or an invasion of the Greeks devastated the Cretan palaces which were rebuilt splendidly until a new disaster, possibly the result of the eruption of the Thera volcano put an end to the major centers of Cretan civilization. Only a few settlements were rebuilt,

while a new writing, the Linear B appeared.The Mycenean or Late-Helladic period, 1600-1100 BC marks the end of the Helladic Bronze Age.The centre of civilization was transferred to the north at Mycenae. The myths that have survived, as well as archaeological finds give us a picture of the society and culture of the Myceneans.The Hellenic races which had invaded the country, brought along their own culture which was the source of inspiration for the Homeric epos.In 1100 BC the Dorians, a Hellenic race, descended from mount Pindos and settled in the Peloponnese.At the same point in history, Greek tribes, the Aeolians from Thessaly, the Dorians and the Ionians from Attica established Greek colonies on the islands and on the coast of Asia Minor.The Phoenician alphabet was adopted by the Greeks who adapted it to their phonetic needs and it was then that the Homeric poems were written.The Iliad in the middle and the Odyssey in the late 8th century BC. The period in history from 1100 BC on is little known. This period in time in Greece lasting until the first decades of the 8th century is known as the Dark Ages and has to show for itself the Geometric style in pottery.