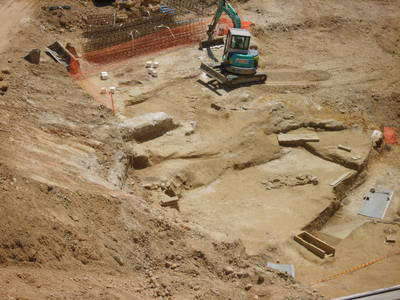 Excavations at the old city port

Archaeologists excavating the old city port of Marseilles, known as the Lazaretto of Arenc, have stumbled upon what appears to be an ancient Greek necropolis dating from the fourth or fifth century BCE.

According to Lionel Guévalet, the Director of the Provence de la société Bouygues Immobilier, “scientists have found Greek burials, which was totally unexpected at this location” and that “this discovery is of real importance because it can challenge what we know about the occupation of Greek origin in Marseilles.”

French sources says that at least half a dozen sarcophagii with urns and ashes have been excavated thus far in the historic port district.

“The Hill of the Lazaretto was an important necropolis also during the Roman period”, says Guévalet. “This discovery would clarify and strengthen the panorama of the Greek occupation, including the location of the cemeteries which are traditionally located outside the city.”