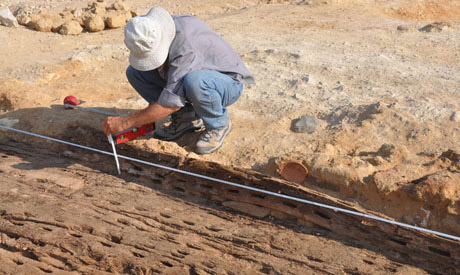 Believed to be part of King Den's funerary equipment

During routine excavation works at the Archaic period cemetery located at Abu Rawash area northeast of the Giza Plateau, a French archaeological mission from the French Institute of Oriental Archaeology in Cairo (IFAO) stumbled on what is believed to be a funerary boat of the First Dynasty King Den (dating from around 3000BC).

The funerary boat was buried with royalty, as ancient Egyptians believed it would transfer the king’s soul to the afterlife for eternity.

The wooden sheets were transported to the planned National Museum of Egyptian Civilisation for restoration and are expected to be put on display at the Nile hall when the museum is finished and opens its doors to the public next year.

The IFAO started its excavation works at Abu Rawash in the early 1900s where several archaeological complexes were found. At the complex of King Djedefre, son of the Great Pyramid King Khufu, Emile Chassinat discovered the remains of a funerary settlement, a boat pit and numerous statuary fragments that bore the name of Fourth Dynasty King Djedefre.

Under the direction of Pierre Lacau, the IFAO continued its excavation work and found new structures to the east of the Djedefre pyramid. However objects bearing the names of First Dynasty Kings Aha and Den found near the pyramid indicate an earlier presence at Abu Rawash.