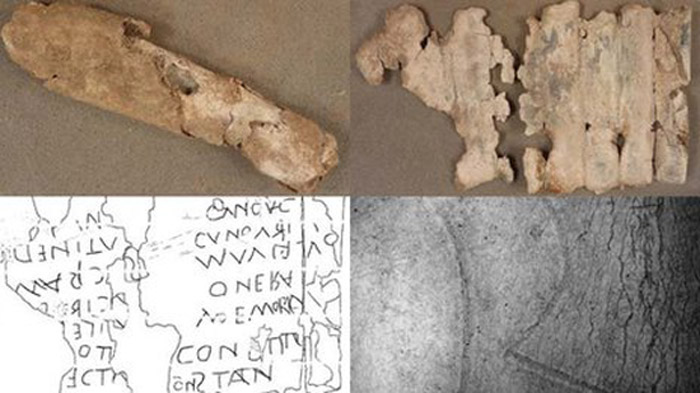 Product of teh local community

f you were called Sacratus, Constitutus or Memorianus, and had some bad luck in Roman Kent, archaeologists may have discovered why.

A “curse tablet” made of lead and buried in a Roman farmstead has been unearthed in East Farleigh.

Inscribed in capital letters are the names of 14 people, which experts believe were intended to have bad spells cast upon them.

The tablet is being examined by a specialist from Oxford University.

It was discovered by the Maidstone Area Archaeological Group during a dig and has undergone a detailed series of tests.

Experts believe it would have been used by Romans to cast spells on people accused of theft and other misdeeds.

The tablets, which have been found throughout Europe, were rolled up to conceal their inscriptions, then hidden in places considered to be close to the underworld, such as graves, springs or wells.

He said it is difficult to date the tablet but believes it was made in the third century AD.

“Lists of names are quite often found on lead tablets,” he said. “Sometimes they accompany a complaint of theft addressed to a god, and name persons suspected of the theft.

“In one case, a tablet found in Germany, the names were explicitly those of enemies.”

The tablet’s significance also lies in the fact that Romans were the first inhabitants of Britain who could read or write.

This means the tablet, along with other similar items, are among the earliest written records of British life.

Only six of the 14 names are legible. The Roman names of Sacratus, Constitutus, Constan and Memorianus can be seen.

There are also two Celtic names – Atrectus and Atidenus – written on the tablet.

Dr Tomlin said the eight other names are incomplete, but further cleaning and testing could lead to them being transcribed.

He added: “If this is a curse tablet, which it seems to be, it is presumably a product of its local community – so it is a reasonable guess that the persons named on it lived there.”

The Sittingbourne-based Conservation Science Investigations (CSI) is being funded by the Kent Archaeological Society to conserve the tablet.

It is hoped that visitors to its offices will be able to watch some of the work take place.

Since 2005, the site has been slowly excavated with finds such as painted wall plaster and an underfloor heating system being discovered.

Other notable artefacts have included broken copper bracelets found scattered on the kitchen floor and a ring, decorated with snakes.