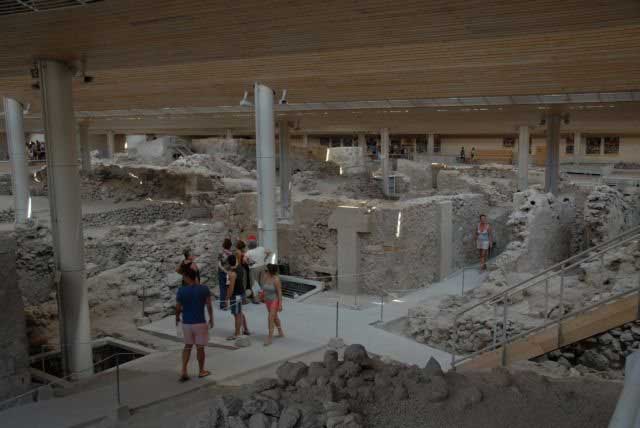 Tradesmen and seamen, lovers of luxury and good food were lost in the most violent volcanic eruption of the last 10.000 years.

They lived in two-storey houses of 200 m2, decorated with impressive murals and elaborate furniture. They had organized kitchens with a hearth, portable ovens and a kind of barbecue for skewered meat. In their cupboards up to 2.000 glasses were stored. They served their guests imported delicacies, like snails from Crete.

Their lavatories were connected to a central drainage. And they were very well organized for anticipating difficult times. They had rescue teams and were prepared in case of emergencies, such as an earthquake.

The only thing ancient inhabitants of Santorini were not ready to anticipate was the most powerful volcanic eruption of the last 10.000 years.

Consequently, in the spring of 1613 BC, one of the most important Aegean urban centers, Akrotiri, with its organized city-planning, its stone-paved roads and its prosperous dwellers, was wiped off the map.

“It was a cosmopolitan harbor town of the time” says to “NEA” the director of the Thera excavation, professor Christos Doumas. Systematic excavation began in 1967, by professor Spyridon Marinatos, under the auspices of the Archaeological Society at Athens. He decided to excavate at Akrotiri in the hope of verifying an old theory of his, published in the 1930’s, that the eruption of the Thera volcano was responsible for the collapse of the Minoan civilization. Since his death in 1974, the excavations have been continued under the direction of Professor Christos Doumas: “It was a wealthy society which developed into an urban center during the time 2000-1650 BC”.

The finds “speak for themselves”: an astounding three-storey building was welcoming visitors of the settlement. The inhabitants of Santorini may even have received delegates of foreign embassies and offered them presents, as a huge wall painting in the stairwell suggests (its expansion exceeds 50 m).

Each house was ca 200 m2 big and had two or three storeys. In one of these houses 2.000 clay drinking cups were found, probably intended for some feast, whereas in a shop 700 pots were discovered arranged by size and quality.

In only one of the four buildings that have been fully excavated since 1967, the archaeologists found more wall paintings than those that have come to light in the rest of the Aegean.

The number of piriform amphorae for transporting oil and wine from Akrotiri represents 50% of the total number found in the Aegean.

This prehistoric settlement of Thera apparently was not only based on agriculture, cattle-breading, fishing and manufacturing, but mainly on trade and shipping, because of its strategic position.

While the buildings of Akrotiri have still a lot to reveal, the inhabitants themselves did not leave any traces behind. Archaeologists believe that due to the earthquake that preceded a few weeks earlier, they moved to some sort of a camp that hasn’t been found yet. Then, they came back, took the dead and wounded and began to restore the buildings when the eruption hit them. People working there managed to leave Akrotiri, and that is why no human remains were found. But they did not have the time to abandon the island.

The most active volcano of Greece and one of the world’s most violent ones, the volcano of Santorini, has erupted 12 times in the last 400.000 years of its activity. A few weeks before it erupted in 1613 BC, an earthquake preceded the Thera Eruption that damaged part of the Akrotiri.

The preliminary volcanic activity probably caused the island’s population to flee. Nevertheless, when the moment of the big eruption came, magmatic activity deposited up to 36 km of pumice and ash, while within a few minutes everybody died from suffocation, as volcanologist Dr George Vougiouklakis explains. 150 billion tons of volcanic materials covered the entire island, and not only Santorini but also islands in a range of 60 km were completely destroyed and were inhabited no sooner than 50 years later. These materials, however, have protected up to date the buildings and their contents.

The Akrotiri archaeological site on the island of Santorini reopened, after remaining closed for 7 years following the collapse of a steel roof that claimed the life of a British tourist and injured six other visitors.