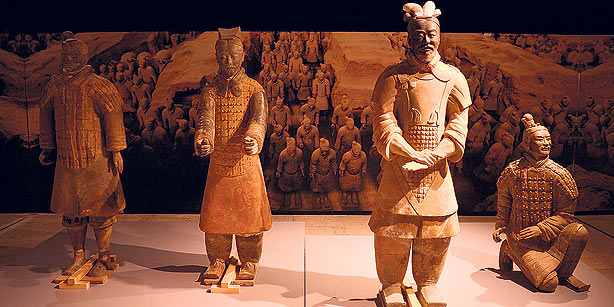 “Çin’in Hazineleri” (Treasures of China) features four of the famous terracotta warriors and one on horse, and 100 historic artefacts on loan from prominent Chinese museums, such as the Beijing’s Palace Museum in the Forbidden City, and the Shanghai Museum.

The exhibition is part of the ongoing cultural program “Year of Chinese Culture in Turkey”.

The Terracotta Army is a collection of terracotta sculptures depicting the armies of the firsti Emperor of China, Qin Shi Huang. The figures date from 246-210 BC and were buried with the emperor in 210-209 BC in order to protect him in his afterlife. Studies show that eight face moulds were most likely used in the estimated 8,000 figures of soldiers, and then clay was added to provide individual facial features.

The Topkapi exhibition will run for three months.