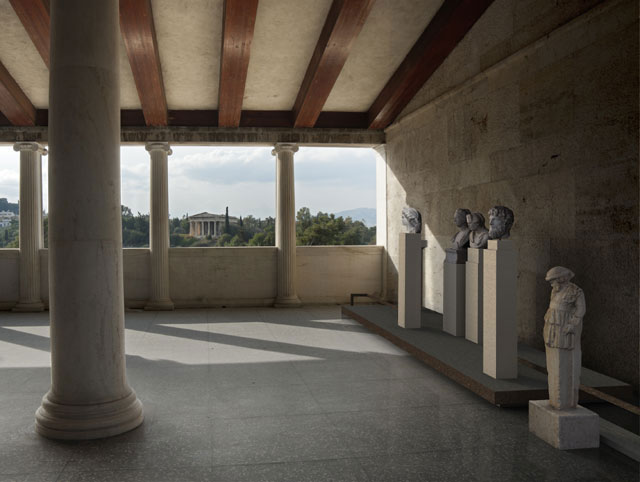 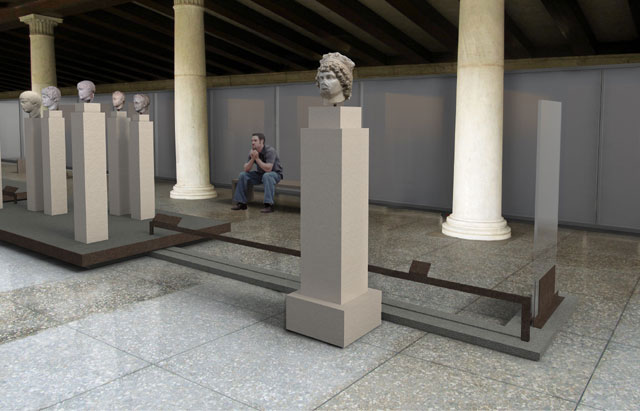 The Cradle of Democracy is Reviving in Athens

Opening of the exhibition “Examples of Sculpture in the Athenian Agora”

The Athenian Agora, cradle of democracy, was the center of the Athenian state’s administrative and judicial functions, as well as of the public political life. This is where significant sanctuaries mostly of institutional character were erected, altars, monuments and statues were created as reminders of Athenian triumphs, and commercial transactions, theatrical performances, religious processions and athletic games took place.

In April 2008, the American School of Classical Studies in collaboration with the 1st Ephorate of Prehistoric and Classical Antiquities submitted a proposal to the Ministry of Finances for the realization of a project at the Athenian Agora, entitled “Reviving the Ancient Agora, the Cradle of Democracy”. The project was planned in the framework of the measures for the safeguarding of European Cultural Heritage.

The programs for the Safeguarding of Cultural Heritage are being carried out by the Hellenic Ministry of Development, Competitiveness and Shipping and are being co-financed by the Public Investments Program and the European Economic Area, which comprises the countries of the European Union, plus Iceland, Liechtenstein and Norway.

The Project “Reviving the Ancient Agora, the Cradle of Democracy” was completed in April 2012. It comprised two sub-projects:

-The digitization and digital archiving of excavation data, e.g. the excavation diaries, photographs, record cards of antiquities, plans and reports of the excavations conducted by the American School of Classical Studies at the Ancient Agora since 1931, and the updating of the existing portal of the School, so that the digital archive will be searchable and accessible from anywhere, freely available to the public, higher educational institutions, students of the classical world, and communities of classical enthusiasts everywhere. This sub-project was an initiative of the American School of Classical Studies (budget: €681,626).

-The renovation and upgrading of the existing exhibition space at the upper floor of the Stoa of Attalos (1,440 square meters), and the reopening of this space to the public, after remaining closed for nearly 30 years. Also the re-exhibition of the ancient small scale sculptures, and foremost the collection of Roman portraits of the Agora. This sub-project was an initiative of the 1st Ephorate of Prehistoric and Classical Antiquities (budget: €282,574).

The new exhibition of sculptures at the upper floor

After accomplishing the work of the project “Reviving the Ancient Agora, the Cradle of Democracy” during the last decade, the 1st EPCA renovated the upper floor of the Stoa of Attalos and re-exhibited the small scale sculptures from the Collection of the Ancient Agora.

The sculptures were displayed in the following exhibition sections:

-Idealistic forms of gods and mortals. This section includes works of the Late Classical-Hellenistic period of the 4th-3rd century BC.

-Roman portraits of the 1st-2nd century AD. In this section portraits of wealthy citizens of Athens are being displayed, which are depicted in imitation of imperial models.

-The city honors the public officials. This small group consists of portraits of public officials and cosmetes at the type of the hermaic stele, dated in the 2nd-3rd century AD.

-Collections of sculptures adorn the private educational institutes of Late Antiquity. In this last section, an important part of the sculptures found in House Ω is being exhibited. Artefacts from the House Ω are also being showcased at the groundfloor of the Stoa.

Before their re-exhibition, these 52 artefacts were conservated and cleaned from the surface accretions of dust and carbon soot. One of the exhibits, the small Roman marble head of Nemesis, a copy of the famous work of Agorakritos, was transferred to the conservation workshops of the New Acropolis Museum and was cleaned from the accretions of black soot with the innovative laser method.

The old porous stone bases of the sculptures which are exhibited were conservated. In some cases new bases of cast material were made.

For the re-structuring of the sculptures a special museographical study was conducted. On its basis, the ancient works which until 2011 were aligned along the walls and between the pillars of the upper floor, where transferred and exhibited at the center of the free space of the Stoa, allowing visitors to observe them from aspects that remained unseen up to now and develop a dialectic relationship to the exhibits. In each section internal groupings were created according to thematic criteria.

Furthermore, the models of the archaeological sites of Acropolis, Pnyka and the Agora were upgraded and re-structured. Thanks to the panoramic view from the upper floor to the archaeological site of the Agora, the hill of Kolonos Agoraios with the well-preserved Temple of Hephaistus and Athena, the Sacred Rock of Acropolis, the Areopagus, and the western hills, the visitors can comprehend the ancient topography by looking at these models and revive the image of the site during Antiquity.