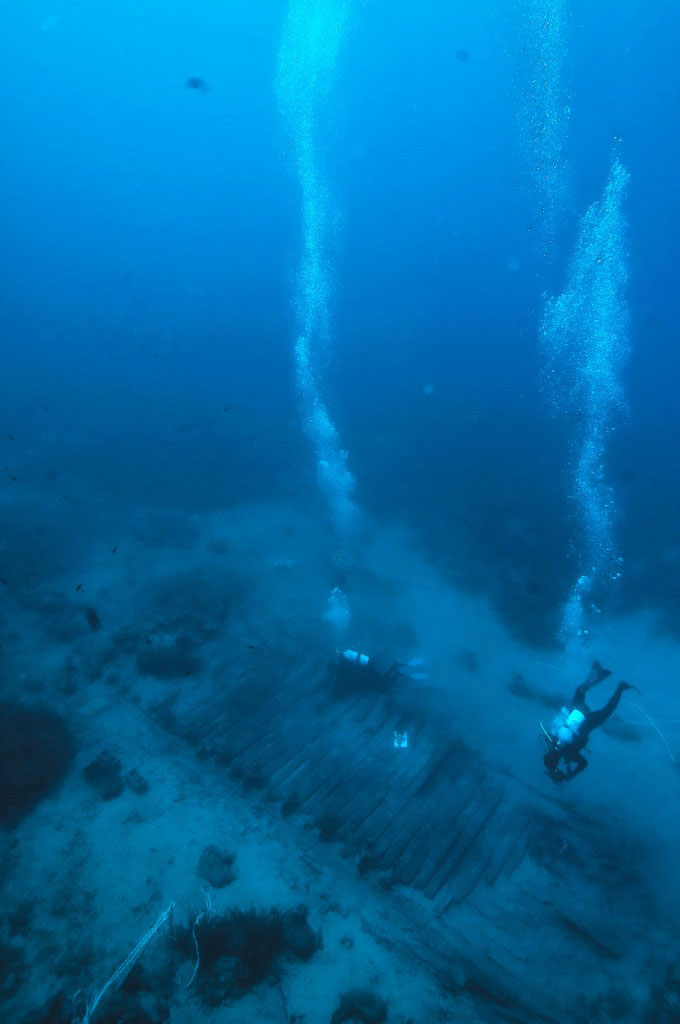 Elgin’s secrets in the bottom of the sea

The last surveys about the Mentor Shipwreck

It is the 15th September 1802. The two-masted sailing ship Mentor sails off from Piraeus heading for England, via Malta. In its holds, there are Marbles of Parthenon and other antiquities, stolen from other monuments of Athens. Eighteen people are on board – 12 crew members, three passengers and three servants. Among these people is Lord Elgin.

Two days later, upon reaching the open waters of Tainaron Cape, Mentor succumbs to bad weather. The attempt of returning to Kythera and docking at Avlemonas Port fails. The two anchors of the ship drift it away. The brig crashes into the rocks and sinks in 22 m depth. The passengers, however, manage to jump onto the rocks and manage to survive.

So Mentor comes into History, becoming one of the most famous and challenging shipwrecks for researchers. Even if the remains of the sculptured decoration of Parthenon –despite rumors- are not in the bottom of the sea, the traces buried there which come to light are enough to uncover lost details and secrets from the expatriation trip of the Parthenon Sculptures, as archaeologist of the Ephorate of Underwater Antiquities Dr Dimitris Kourkoumelis said yesterday during his lecture at the National Archaeological Museum. Dr Kourkoumelis summarized the research findings of the last two years at the site. The surveys have been conducted by the Ephorate of Underwater Antiquities and funded by Stavros Niarchos Foundation, and the Kytherian Research Group Inc.

As Dr Kourkoumelis told newspaper “Ta Nea” in order to explain why the ship was equipped with three pistols, cannonballs, and a significant number of different caliber bullets, “The period of Mentor’s sinking was an extremely turbulent time in East Mediterranean and maybe this is the reason why even merchant ships were armed to protect their cargo in case of pirate attack”.

The recent survey conducted at the Mentor shipwreck is not the first one. After the shipwreck, it took divers two years to hoist all the boxes containing sculptures from the Parthenon and the Temple of Athena Nike, and other antiquities. A number of excavations have taken place since then, as there were rumors that fragments of the sculptures are still in the bottom of the sea.

“There are very few, if not none possibilities, of finding ‘Marbles’, although this shipwreck’s research has been connected with one of the most poignant episodes of contemporary cultural history in Greece” says Dimitris Kourkoumelis. Nevertheless, as he points out, 210 years after the shipwreck, at least five schist plates with fish fossils, and ancient coins have been located. Objects dating from different periods that were not mentioned in the ship’s bill of lading, and whose owner remains unknown, indicate the great European interest about Greek antiquities at that time.