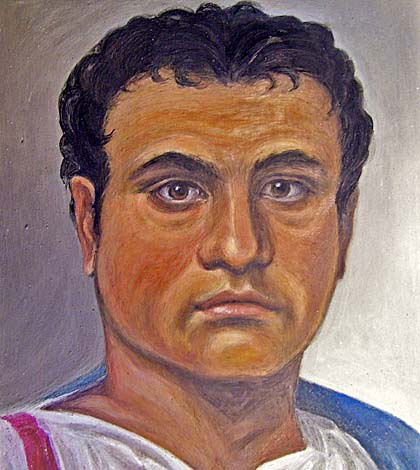 In November 1995, builders working on the Newport University campus found the skeletal remains of a man who had lived in 200 AD. Analysis showed the skeleton belonged to a well-preserved man of about 40.

The skeleton was put on display at the National Roman Legion Museum in Caerleon in 2002. As it became one of the most popular exhibits of the museum, staff decided to find out more about the man and build a picture of how he may have looked.

Now, thanks to latest technology and by using forensic techniques, experts have reconstructed a portrait of the man. The image was unveiled at the National Roman Legion Museum in Caerleon last Thursday.

In trying to create the portrait of the wealthy Roman, scientists first carried out isotype analysis on the enamel of one of the skeleton’s teeth. That way they found out that the man had spent his childhood in the Newport area and that he was probably a local boy.

“The fact that the man had been buried rather than cremated as most of the people were at that time was a clue to the fact he was probably well off,” said curatorial officer Dr Mark Lewis. Latest evidence shows he might have been a wealthy merchant supplying the Caerleon Roman fortress. “He may have been high up in the administration of the fortress. He may have even served in the army and come home to Wales for retirement. (…) Maybe his mother or grandmother married a Roman soldier, perhaps his father was a soldier and he followed him into the army,” Dr Lewis said.

To reconstruct the man’s face, experts used forensic techniques employed by the police. The Roman man’s skull was scanned to create a 3D digital model. Then the missing areas of the skull were digitally reconstructed.

The museum also wanted to include a portrait of the man in its gallery, so National Museum Wales conservator and artist Penny Hill got involved. Ms Hill used the “encaustic” technique, which was notably used in the Fayum mummy portraits.