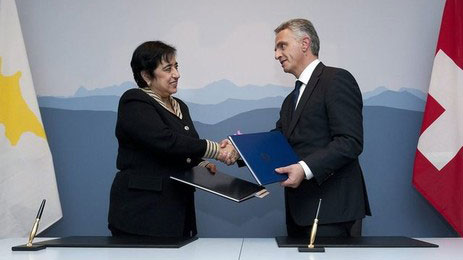 An official working meeting has taken place in La Chaux-de-Fonds between Swiss Federal Councillor Didier Burkhalter and his Cypriot counterpart Erato Kozakou-Marcoullis on the 11th of January. Their talks focused on the signing of the bilateral agreement on the protection of cultural goods. The purpose of this agreement is to contribute to the preservation and the exchange of the cultural heritage and to prevent the illicit trade in protected archaeological cultural goods.

The aim of the agreement on the protection of cultural goods between Switzerland and Cyprus is to protect the cultural heritage of both states and to regulate the legal import of cultural goods. It defines methods of restituting cultural goods that have been illicitly imported and contains provisions relating to co-operation in the fight against the illicit transfer of cultural goods and the preservation of the cultural heritage. Cyprus is one of the historical cradles of European culture, with a correspondingly impressive heritage. In keeping with this background, the location chosen for the signing of the agreement was the 1912 Maison Blanche in La Chaux-de-Fonds. This building was the first that Le Corbusier designed as an independent architect.