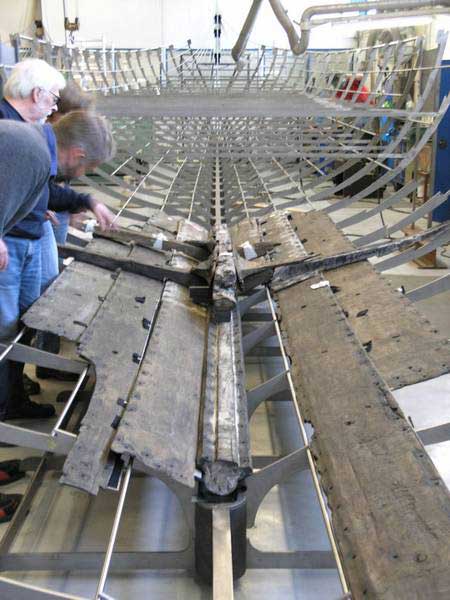 At the National Museum of Denmark

The wreck of the longest Viking longship in the world is the main attraction at the National Museum’s major international special exhibition, VIKING. It will be on show in Prinsens Palæ I Copenhagen from 22 June until 17 November 2013.

It centres round the wreck of a 37 metre long warship found in Roskilde. The ship, which will be exhibited for the very first time, was a warship that could carry 100 Viking warriors and was probably part of a royal fleet.

VIKING is the National Museum’s largest special exhibition on Vikings for twenty years. The exhibition will touch upon themes such as war and expansion, power and aristocracy, rituals and beliefs as well as cultural contacts and trade. These are the central narratives in the exhibition, which will show objects from museums in twelve European countries.

The exhibition will include a number of unique and new finds, which have never been exhibited before as well as objects that have never before been included in a cross-cultural exhibition. It will include a large new hoard of gold and silver from Yorkshire in England and hoards found in Russia and Norway. The Vikings’ beliefs and change in beliefs will be communicated through a series of exceptional idols and there will be room for a reliquary cross discovered a few months ago. The essence of the Vikings will be shown by their way of depicting themselves and the exhibition will be able to display some of the world famous chess pieces from Lewis in Scotland, which are shaped as Viking warriors. Some of these depict helmeted warriors who are biting into their shields. The exhibition will illustrate the fierce nature of the Viking warriors with some filed down human teeth from a warrior and a large number of weapons including one of the few helmets that has been discovered.

The various themes of the exhibition will be tied together by the ship at the centre, which reflects the fact that ships and seamanship provided the basis for the success of the Vikings.

Their ships brought the Vikings out into a globalised world and sailing was an important means of communication that bound the Vikings’ society together. Thanks to their seaworthy vessels they were able to travel across four continents, colonise Iceland and Greenland and later reach America. The ships allowed the Vikings to bring home traded goods from the Middle East, the Byzantine Empire and from as far away as China. Their long warships enabled the Vikings to transport invading armies so large that Danish kings were able to conquer England and create a North Sea empire. The ship was also a status symbol that demonstrated the might of the aristocracy.

With the exhibition the National Museum would like to present a modern and varied picture of the globalised Vikings. During the Viking period Scandinavia was not isolated from the rest of the world. The Vikings knew that there was an outside world and they were drawn by the knowledge and culture from the world that they sought with both peaceful and warlike means.

VIKING is organised by the National Museum of Denmark, the British Museum in London and Museum für Vor und Frühgeschichte – Staatliche Museen zu Berlin, which will be displaying the exhibition during 2014 and 2015. The exhibition is being supported in Copenhagen by A. P. Møller og Hustru Chastine Mc-Kinney Møllers Fond til almene Formaal (the Møller Foundation), Augustinus Fonden (the Augustinus Foundation) and Bikubenfonden (the Bikuben foundation).