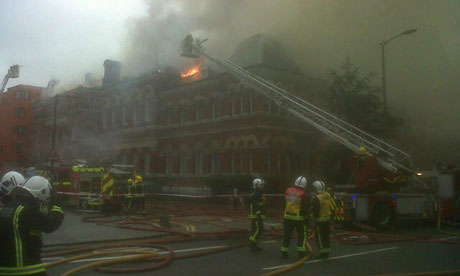 Curators are hopeful that most of its collections were rescued

“The Cuming Museum is temporarily closed following the Walworth Road fire on Monday 25 March 2013. Newington Library and Walworth One Stop Shop also remain closed,” as the website of the museum announced.

The Cuming Museum, founded in 1906, is home to the worldwide collection of the Cuming Family and the museum of Southwark’s history. It houses a diverse collection that includes archaeology, ethnography, social history and natural history, including objects from Roman London, Chinese ornaments and African tribal costumes.

120 firefighters took part in the efforts to suppress the blaze, after a fire took hold in the roof on Monday afternoon. The firefighters tried to salvage as many of the artefacts as possible and managed to rescue hundreds of objects that were on display. However the extent of the damage is still unknown. While the building is still too dangerous for the Museum’s staff to enter, curators are optimistic that most of the collections have survived safely.

It should be noted that the Cumings Museum also hosted two loans of the British Museum (two salt-glazed stoneware birds loaned to a temporary exhibition of the eccentric creations of the 19th-century potters the Martin brothers), whose fate remains unknown.