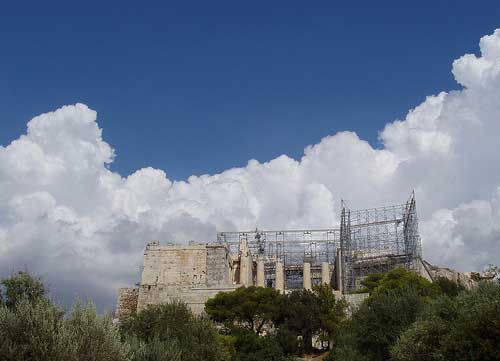 The winners of the competition were announced yesterday at a Press Conference given at the Hellenic Society for the Protection of the Environment and the Cultural Heritage.

“This project involved one of the key structures of European culture and the development of western architecture. It began as a purely rescue project, aiming at saving the monument from immediate danger of collapse. But the Jury recognized that in its second stage it succeeded, through the identification and reinstallation on the building of the scattered architectural material and the high quality of the craftsmanship employed, in enhancing the inherent formal and social values of an iconic monument.”

The Propylaea is the monumental gateway to the Acropolis, built 437-432 BC. It consists of a central building with two lateral wings and Doric facades facing east and west. The superstructure of the central building was extensively but inadequately restored in 1909/17, using iron. The aim of this project was to rectify the problems caused by the fragmentation of marble due to the oxidation of this iron. In a rescue campaign between1990-1993, 64 ceiling blocks of the earlier restoration were disassembled and conserved. Then, under a special programme approved by the Hellenic Ministry of Culture and implemented in the period 2001-2010, a further 192 blocks were disassembled and reassembled using titanium reinforcements. With the addition of the earlier 64 ceiling blocks and 74 further blocks restored for the first time, a total 330 blocks, their weight varying from 0.5 to 11 tons, were re-erected. The ancient material was thus successfully rescued and the architectural values again fully displayed.

Committee for the Conservation of the Acropolis Monuments (ESMA)

“For 37 years the Committee for the Preservation of the Acropolis Monuments has carefully planned and guided the conservation of one of the most iconic sites of European culture. The results of their advice can be seen in the quality of the work, its reversible nature, the use of compatible new materials, scholarly research, the use of traditional marble cutting techniques and the documentation of the work, all to the highest standard. The Jury saw this as an outstanding example of dedicated service to monument protection.”

The Committee for the Conservation of the Acropolis Monuments (ESMA) is an interdisciplinary body of top specialists in various fields (architects, archeologists, structural and chemical engineers and conservators), which since 1975 has been dedicated – gratuitously – to the planning, directing and supervising of the restoration works on the Athenian Acropolis, supreme monument of European culture. The Acropolis restoration project comprises structural restoration and anastelosis interventions (the use of reassembled original material), surface conservation works, extensive documentation procedures, the implementation of educational programmes and the dissemination of the results and achievements both to the academic community and to the wider public. The expertise acquired during the over 35 years of execution of the Acropolis restoration works, planned, directed and supervised by the ESMA, forms the modern Greek approach (‘school’) to the restoration of classical monuments. It exercises a considerable and beneficial impact on similar projects on Greco-Roman monuments in the Mediterranean region.