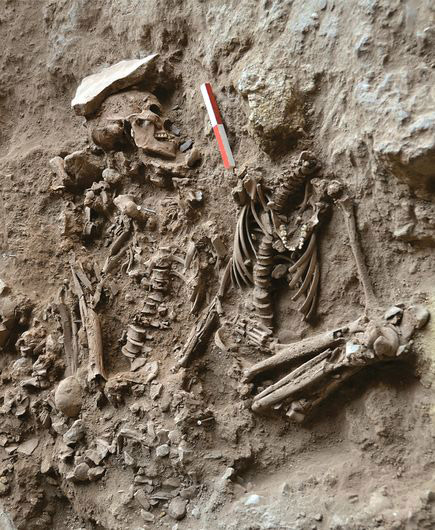 The practice to decorate graves with flowers dates at least from 10000 BC, according to new finds from Mount Carmel, Israel.

There, within a cave, archaeologists from the University of Haifa found the imprints of now decomposed mint, sage and other scented plants lining a group of four tombs, remains of the Natufian culture which flourished in the lower Near East ca. 13000-10000 BC.

“The Natufian society was one of the first—possibly the first—to transition from a roaming hunter-gatherer lifestyle to permanent settlements, and was also the first to establish true graveyards”, said team leader Daniel Nadel. Now, the new discovery indicates that the Natufians were also among the first to use flowers to honor their dead.

With the exception of 70.000 year old pollen samples found in a Neanthertal grave in Iraq, there is nothing to indicate that flowers were used to adorn the dead during the early periods of human history. “From [the Neanderthal] example until the Natufians”—a period spanning some 50,000 years—”there is not one example [of flowers decorating graves],” states Nadel. However, he noted that this does not necessarily mean that flowers were not used during funerary practices, as they decay over time.

The choice of flowers is also of importance. “There are hundreds of flowers on Mount Carmel during the spring, but only a small group provide very strong fragrances. It’s impossible that the Natufians didn’t recognize the smell” when they chose them for the graves, Nadel said, reflecting the view that there was a certain amount of care for the dead.

Such care is demonstrated in a particular grave found at Mount Carmel, hosting a double burial. The two skeletons belonged to an adult male and an adolescent of undetermined sex and, based on other finds from the rest of the tombs, they had been buried with great pomp and circumstance. The sides of the pit hosting the burial had been plastered with mud while its bottom had been lined with the plants. The percentage of animal bones found in relation to the grave also demonstrates how important the funerary event was for the rest of the community.

Still, there are a lot to be answered before the researchers can form a clear image of how the Mount Carmel Natufians were facing death in relation to kinship or spiritual beliefs. “Are they relatives? Are they parent and child? Are they brothers? Did they die together? And how come they were buried together? We don’ t know. “, says Nadel concerning  the double burial. His study appears in the journal “Proceedings of the National Academy of Sciences”.