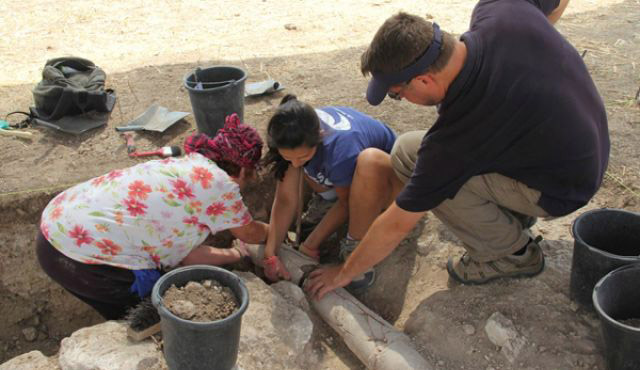 Revealing the secrets of the Ironclad Legion

Israeli archaeologists have found ruins they believe are the site of one of the two Roman legions based in the country between 120 and 300 AD.

The site sits between Tel Megiddo, the ancient fortified city that has been named a UNESCO World Heritage site, and the oldest known Christian house of worship, which was discovered around seven and a half years ago (2005) about a kilometer south.

The legion had left its mark on the site, which was called “Legio”, to become “Lajun”in Arabic (probably from the Greek “Λεγεών”). Early Zionists restored the name Megiddo.

Israel Antiquities Authority archaeologist Yotam Tepper had long suspected that the site in the Galilee was the base of the Legio Sexta Ferrata, the 6th Roman Legion, also known as the Ironclad Legion. The other legion in the country was the 10th, based in Jerusalem.

Over the past week, an expedition led by Tepper and archaeologist Matthew Adams found the base of a battery or wall, a moat surrounding the camp, water pipes, a covered sewage channel, coins and tiles. The legion’s symbol adorned a broken shingle.

“From here, around 3,500 soldiers in a hierarchical system ruled over the Galilee and part of Samaria.”

Excavations and surveys over the years found the locations of the Jewish village Othnai in the Megiddo Prison compound, and the Roman-Byzantine city of Maximianopolis near Kibbutz Megiddo. To find the legion camp, Tepper conducted field surveys and relied on surveys from the past.

“I even went to the homes of local people, who poured me out old coins from old tin cans,” he says. “In people’s gardens, we found archaeological artifacts bearing various inscriptions.”

Slowly he put together the puzzle: aqueducts, burial grounds and the ruins of a civilian settlement at the edge of the camp. There were also remnants of ancient roads and a milestone marking the two-mile mark from the camp. All this helped Tepper conclude that the legion’s camp lay under a hill.

Tepper and Adams analyzed an enhanced high-resolution satellite photo and could clearly make out the square marking the camp’s boundaries; each side was around 250 meters long. A ground-penetrating radar scan provided further evidence. Student volunteers from the United States, Europe and Australia helped out.

According to Hanan Erez, head of the Megiddo Regional Council, the plan is to build a tourism complex based around the ancient chapel and Tel Megiddo. Next week a senior official of the Catholic Church is scheduled to visit the sanctuary’s remains.

According to Tepper, the chapel offered evidence of an ancient Christian community whose members included Roman officers. This was the period before Christianity was recognized as a religion, and well before it became Rome’s official religion. The chapel was apparently abandoned at the end of the third century.

Tepper believes the legion camp was also abandoned around that time. “You can see that the camp wasn’t destroyed but was abandoned in an orderly way,” he says. “From here they moved east across the Jordan River.”