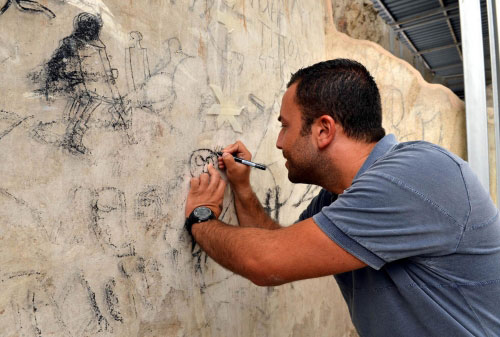 Wall paintings in the Izmir Agora

The richest collection of graffiti using the Greek alphabet

A 2nd-4th centuries AD Greek graffiti collection has been found in the İzmir Agora, during the ongoing excavations in the area.

Excavations in the Agora go back to 1932. Prof. Dr. Akin Ersoy of Dokuz Eylul University, head of the excavations since 2007, said that in the last six years his team has revealed the city council, mosaics and Roman baths and a large number of sculptures, ceramics and coins.

For this latest find, the 500 writings and paintings on the walls in the underground of the basilica, the archaeologists asked for the help of Swiss experts to reveal them under the plaster, without damaging the structure.

“We completed the restoration of 30 meter long area on the wall of totally 160 meters. Ancient Languages Specialist Prof. Dr. Cumhur Tanriver is working on the decoding of the writings. The writings on the wall gave us interesting information about the late Roman period. There are ships, fish, sexual organ figures and potraits which were carved in stone,” Ersoy said.

The graffiti tell about daily life and culture in the Hellenistic and Roman periods. It is the richest collection of wall paintings using the Greek alphabet.

Among the inscriptions, there are some personal confessions, such as: “I love someone who does not love me.” Others refer to religious beliefs: “The gods healed my eyes, this is why I dedicate an oil lamp to the gods.” An interesting part of the graffiti are the riddles, which the experts haven’t solved yet.