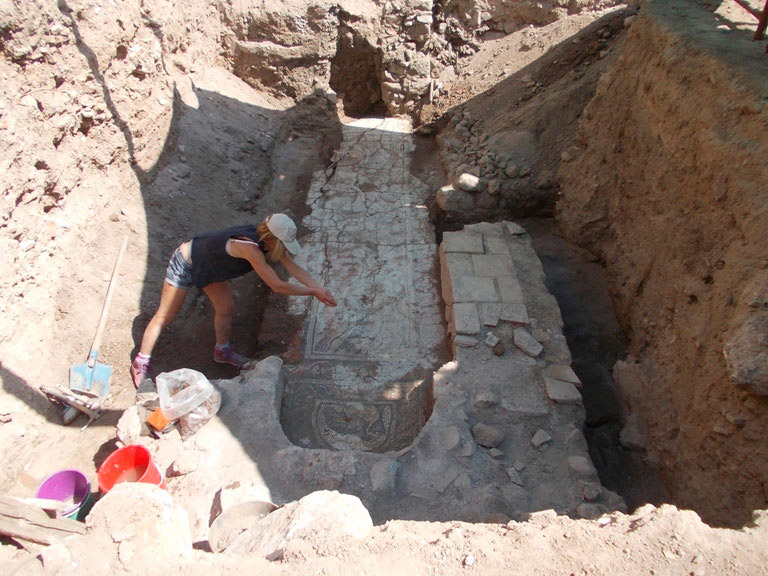 Archaeologists hit the heart of the Theban Mycenaean Palace

Season 2013 of the excavations taking place at the site of Kadmeia in Boeotian Thebes in central Greece has been completed bringing to light a series of impressive finds, including Mycenaean frescoes and a Late Antique mosaic, according to a local newspaper’s report.

As stated by “Boiotiki Ora” newspaper, one of the most impressive finds is the mosaic floor depicting marine landscape, which came to light in Antigonis Street. According to the Emeritus Head of the Ephorate and head of the excavation team dr Vassilis Aravantinos, the mosaic dates to the 4th century AD, sharing the same dating with similar mosaics located during the past in Pindarou Street and the Stamatis Plot.

Two meters further and to the left of the mosaic, the excavators hit the destruction layer of the Mycenaean palace. “Now we are at the heart of the palace and we have a sample of a very good wall-painting composition depicting a deer-hunt, indicating that we are in a elaborately decorated formal ceremonial space. So, since we already have the first trenches ready, we assume that next year’s excavations will be fruitful even from the beginning”, stated dr Aravantinos.

Excavations are taking place in collaboration with the 9th Ephorate of Prehistoric and Classical Antiquities, and under the auspices of the Archaeological Society in Athens.