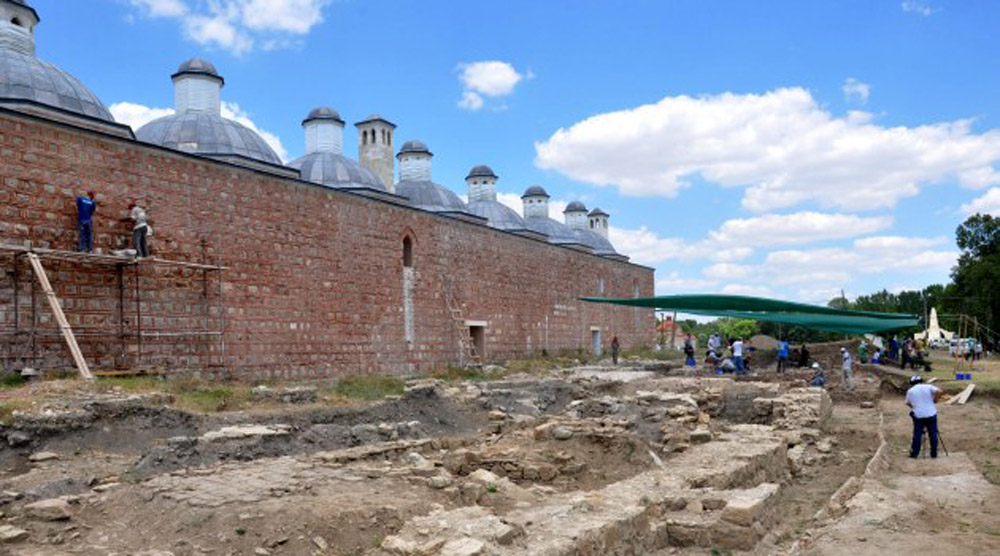 In the Conqueror’s Kitchen

A set of impressive finds revealing aspects of Ottoman culinary tradition of the times just before the Conquest of Istanbul by Mehmet II have been brought to light during the latest restoration works at the Edirne Palace, where the famous Sultan was living just prior to his victory.

“We think the kitchen utensils that have been found are mostly associated with the Ottoman palace’s kitchen, the Matbah-ı Amire. A huge spoon from the 15th century drew our attention most,” says archaeologist Mustafa Özer, the head of Edirne “Yeni Saray” (Saray-ı Cedid-i Amire) excavations, adding that the restoration, documentation and conservation were still continuing alongside the excavations.

Özer said the excavations in the area between the Matbah-ı Amire and the Tuna River have been ongoing since 2009.

The findings were cleaned at the excavation sites in order to take them to inventory.

Excavations also continue in the “su maksemi” (water distribution pools), which was used during the Ottoman period. Some pieces of marble epigraphs that gave clues as to the year of construction of the palace have recently been found. “Our aim is to complete the other pieces of the epigraph to find out which part it belongs to,” Özer said, adding that their expectation was to complete the excavations by the end of September.

The palace, originally built with the order of Sultan Murad II in 1450 – who named it Saray-ı Cedid-i Amire- and finished by Mehmet II the Conqueror, had been elaborated by many Sultans including Süleyman I (the Magnificent) and Mehmet IV. It was set on fire by Governor Cemil Pasha before the Russian occupation in 1878, having been used as an arsenal in the 1874 Ottoman-Russian War.