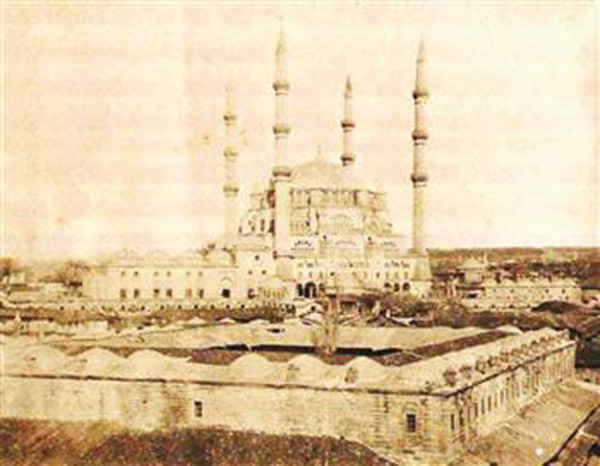 The remains of the Yemişkapanı Inn were found during excavation works in the square in front of Edirne’s Selimiye mosque, considered the masterpiece of Sinan. The excavation area has been extended.

Excavation works carried out in the square in front of the Selimiye mosque in the northwestern province of Edirne have revealed the remains of Yemişkapanı Khan, which is estimated to date back to 425 years ago. The area of excavations was extended after the finding.

The Edirne Municipality has prepared a project to reorganize the Selimiye Mosque Square but the Edirne Cultural and Natural Heritage Preservation Board did not approve the project on the grounds that historical remains are in the area. With the decision of a committee, excavations started last week in the square at three different points.

During the works, the wall remains of Yemişkapanı Khan were found. The khan is known to have been built in 1588 and served as a fruit and vegetable bazaar for the public in the Ottoman era. The wall was revealed at a two-meter depth and officials decided to continue excavations to reach the continuation of the wall.

Edirne Deputy Mayor Ertuğrul Tanrıkulu said that a 12-person team was working in the excavation area, adding, “Now works will continue to find the whole khan. Following two months of work, the khan will be covered with glass.”

The Yemişkapanı Khan, located in the big square in front of the Selimiye Mosque, which is on the UNESCO World Heritage List, was built in 1588. The khan collapsed in 1937 because of disrepair and its pieces remained underground in the square.

The Selimiye Mosque was commissioned by Sultan Selim II and was built by architect Mimar Sinan between 1569 and 1575. It was considered by Sinan to be his masterpiece and is one of the highest achievements of Islamic architecture.