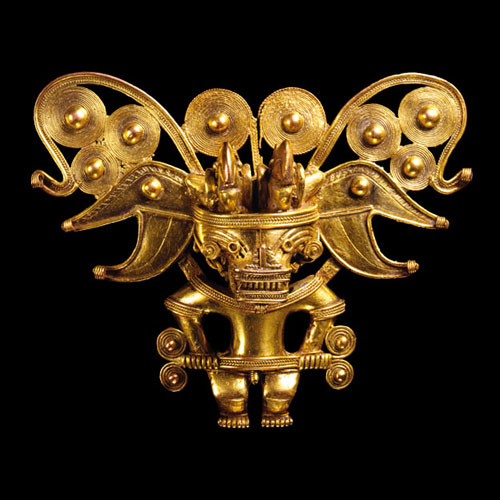 Power and gold in ancient Colombia

The British Museum has announced the opening of a major exhibition “Beyond El Dorado. Power and gold in ancient Colombia”, featuring more than 300 astonishing objects made from gold and other precious materials. Organised with Museo del Oro, Bogotá, this exhibition will explore the rich and diverse cultures of Colombia before the 16th-century arrival of the Spanish. It will open on October 17, 2013 and run through March 23, 2014.

The myth of El Dorado

For centuries Europeans were dazzled by the legend of a lost city of gold in South America. The truth behind this myth is perhaps even more fascinating. El Dorado – literally ‘the golden one’ – refers to the ritual that took place at Lake Guatavita, near modern Bogotá. A man, covered in powdered gold, dived into the lake and emerged as the new chief of the Muisca people. Although gold was not valued as currency in pre-Hispanic Colombia, it had great symbolic meaning. It was one way the elite could publicly assert their rank and semi-divine status, both in life and in death.

The exhibition features over 200 fascinating objects from Museo del Oro, Bogotá, and around 100 from the British Museum’s collection. They show technologically advanced and sophisticated goldworking techniques, including the use of an alloy composed of gold and copper, and the use of textiles, feathers, stones and ceramics. These beautiful and detailed works display a level of complex craftsmanship that perfectly marries art and skill, and show the differences in techniques and designs across the region.

With a focus on the craftsmanship of peoples including the Muisca, Quimbaya, Calima and Tairona, the exhibition presents the complex network of societies in ancient Colombia – a hidden world of distinct and vibrant cultures. The remarkable objects reveal glimpses of these cultures’ spiritual lives, including rituals of hallucinogenic transformation, engagement with animal spirits and objects animated through music, dancing and sunlight.

The exhibition uncovers the extraordinary metalworking skill of the peoples of ancient Colombia through a unique collection of objects, some of which are being displayed in the UK for the first time.