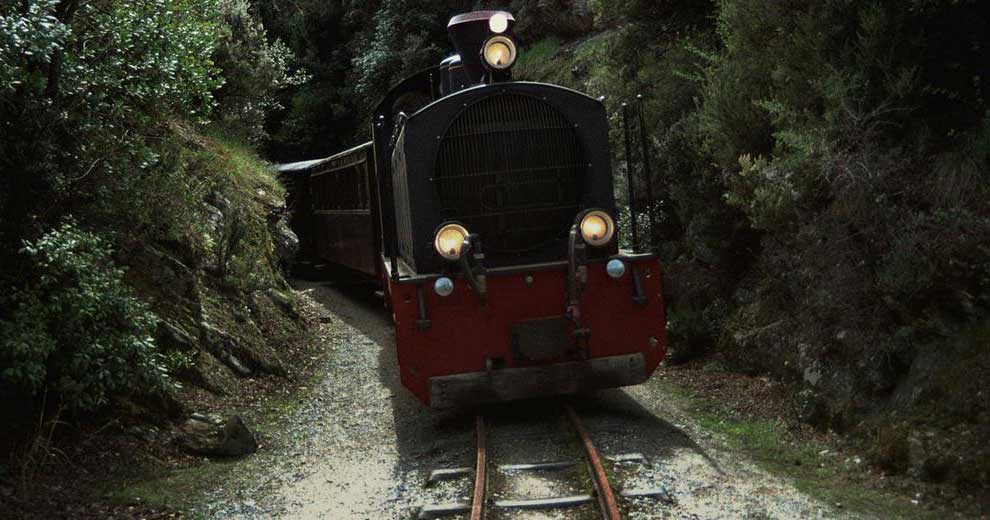 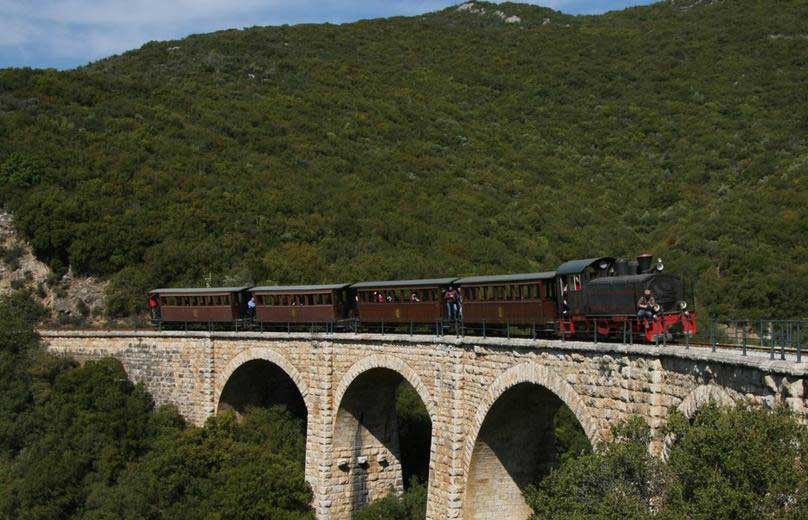 The little train of Pelion

It is morning at the Ano Lechonia Railway Station. The little train’s whistle signals the beginning of an unforgettable trip. The ascent on the beautiful slopes of Mt. Pelion has started!

This 60 cm gauge line, one of the narrowest in the world, hosts the engine and the 4 cars of “Moutzouris”, a nickname which is used in Greek for someone who turns things black – an obvious choice in the days of steam.

The terrain between Ano Lechonia and Milies is mountainous, filled with dense vegetation, mainly made up of plane trees, olives and pine trees.

The train’s only intermediate stop is at the Ano Gatzea station for 15 minutes; from there it toils on to Milies and towards the completion of this 15km run. The total journey duration is about 90 minutes.

Up until Milies, the route is awash with natural beauty and features numerous architectural landmarks, constructions from carved stone and grey limestone that form arched bridges, tunnel entries and retaining walls. An exquisite ample of this is the five-arched stone bridge of Kalorema, in the area of Malaki.

On the final approach towards Milies, the scenery becomes more extreme, with the crossing of the steel bridge of Taxiarchis, also known as “De Chirico’s Bridge,” being the highlight of this last section. Here, some pretty unique engineering is at work. This is a rare occasion where a train crosses a bridge that is straight, but the tracks that lie on it are actually curved!

The historical “little train of Pelion” used to run between Volos and Milies, on the tracks designed by the railway engineer Evaristo de Chirico. A young admirer at the work site, Giorgio de Chirico, son of the engineer, drew inspiration in these childhood memories and recorded that in his works, usually in the form of a miniature train silhouette, half-hidden behind walls or arches, much like a child’s “spying” gaze into the adult world.

Giorgio de Chirico was born in Volos, the eldest son of Evaristo and Gemma de Chirico. His ancestors were Italian having lived in Eastern Mediterranean for several generations. His father was a rail engineer employed in the supervision and construction of the Thessaly railway. His mother was an opera singer.

Evaristo de Chirico wished for his son to follow in his steps, but eventually encouraged the artistic interests of both Giorgio’s and his brother Alberto Andrea, assigning their education to private tutors.

De Chirico’s first teacher was a young Greek painter from Trieste, Mavroudis. Later, from 1903 to 1905, he studied at the School of Fine Arts, where he was taught by George Roilos, Constantine Volonakis and George Iacovidis.

The little train of Pelion crosses the mythical routes of the Centaurs and the Dodecatheon as, according to the ancient Greek mythology, Pelion was the summer habitat of the twelve gods of Olympus.

Somewhere in the dense forest covering the slopes of Mt. Pelion, and in particular, where the R.R. Station of Milies lies today, researchers place the site of the wedding between Pileas and Thetis (the parents of Achilles). The mythical battle involving the Centaurs and the Lapiths for the sake of beautiful Hippodamia is also thought to have taken place at this very site.

Deep in the gorge of Taxiarchis, on the last turn towards Milies, lies the cave of wise Centaur Chiron who is an important figure in many ancient Greek myths, usually appearing as the tutor of Achilles. Chiron, who was a healer, had bestowed upon Achilles’s parents the spear which he later used in the Trojan War.

The cave of Chiron is exactly at the foot of the rock one which the chapel of Taxiarchis can be found today. It is said that inside that cave is the beginning of a path that connects to a similar cave in the area of Malaki or even further, to the hill of Goritsa on the east side of the city of Volos.

At the end of the route, lies Milies station. Traditional guesthouse and taverns await the visitors, while a cobbled stone footpath takes you up the village’s main square (about 15m). Here one can marvel at the church of Taxiarchis, renovated in 1743 (!), the library which is one of the oldest in Greece and visit the museum of folk art.

The visitor will come upon numerous fountains with running water, picturesque churches and chapels, apple, olive and chestnut trees and many beautiful gardens. The mythological and historical past of the area is reflected in the many monuments that greet the modern visitor as he makes his acquaintance with the place.

Nature lovers and hikers will find here paths of various levels of difficulty. A typical route follows the rail line from Upper Lechonia to Milies. Other trails, appropriately marked, are from Milies to Koropi and Milies to Kala Nera.

Pelion is a popular tourist destination and the Pelion train is a unique offering which attracts many Greek and international visitors, every year. This route is perhaps the most famous train journey filmed by friends of the railway and camera enthusiasts.

2013 Timetable for “The little train of Pelion”

The “Little train of Pelion “starts running on week-ends as follows: