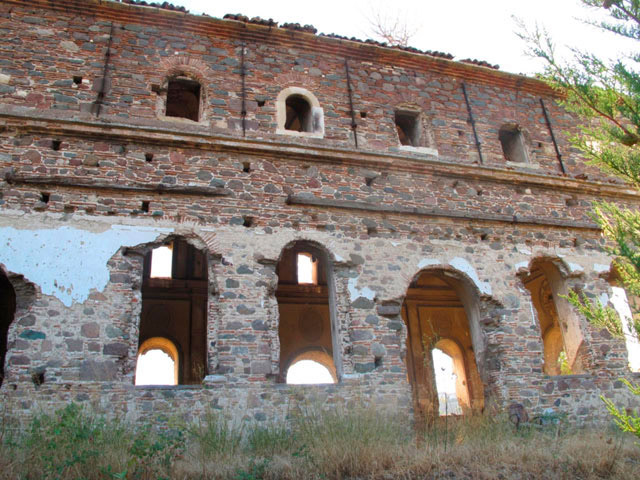 A three-aisled basilica, built in 1846, during the time of the Ecumenical Patriarch Anthemus VI, the Prophet Elias church is one of the few orthodox churches still surviving within the Smyrna wider area. It is situated 2 km. southeast of Izmir, in the Valley of St. Anne, in the same area where Roman aqueducts have been found and where the Meles River flows.

The monument’s dimensions are 10 X 19 m. and it bears a four-side tiled roof. Today it lies in ruins. Most damages are located on its western wall. Its interior is looted. However, its facade still retains those characteristics that made Prophet Elias a favourite spot for the inhabitants of the multicultural Smyrna (Greek for Izmir) in the beginning of the 20th century (the monument has been immortalized in that period’s postcards).

Elements regarding the monument have been recorded by the geologist and Smyrna historical topography scholar Achilles Chatziconstantinou. Only two years ago, postgraduate Architecture student Dogai Korkmaz documented the monument in the framework of his research. After 1922 the area had been declared a military zone and the church was transformed to an ammunition storehouse. Even then, it was less threatened as it is now due to the construction works.

In a letter adressing Mr. Celik, Mr. Panagiotopoulos writes: “While progress in infrastructure and construction projects  is to be encouraged in such difficult times, we, as Minister of Culture, should do everything possible to protect the monuments, so that economic development to be combined with respect for culture. The Church of Phrophet Elias, regarded with respect on behalf of Muslims and Christians alike, represents a common ground for our cultural heritage. I believe that you will do whatever you can, in the framework of your capability, to protect this monument”.