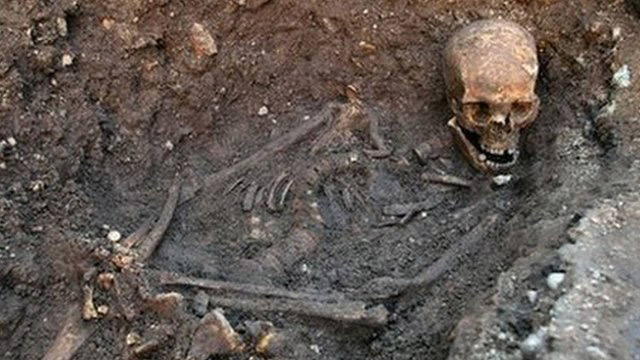 Very common during his time

Richard III suffered from a roundworm infection, according to research carried out on his skeleton.

The body of the king, who ruled England from 1483-85, was discovered last year by archaeologists at the University of Leicester, and scientists have since been undertaking careful analysis of the remains.

A team of researchers led by Dr Piers Mitchell, of the Department of Archaeology and Anthropology at Cambridge University, used a powerful microscope to examine soil samples taken from the skeleton’s pelvis and skull, as well as from the soil surrounding the grave.

It revealed multiple roundworm eggs in the soil sample taken from the pelvis, where the intestines would have been situated. However, there was no sign of eggs in soil from the skull, and very few in the soil that surrounded the grave, suggesting the eggs in the pelvis area resulted from a roundworm infection, rather than external contamination by the later dumping of human waste in the area.

Roundworms infect humans when people ingest their eggs via contaminated food, water, or soil. Once eaten, the eggs hatch into larvae, which migrate through the tissues of the body to the lungs where they mature. They then crawl up the airways to the throat to be swallowed back into the intestines, where they can grow into adults around a foot long. Roundworm infection is thought to be one of the commonest health conditions in the world, affecting up to a quarter of all people globally, though it is rare in the UK today.

It is spread by the faecal contamination of food by dirty hands, or use of faeces as a crop fertiliser.

“Our results show that Richard was infected with roundworms in his intestines, although no other species of intestinal parasite were present in the samples we studied. We would expect nobles of this period to have eaten meats such as beef, pork and fish regularly, but there was no evidence for the eggs of the beef, pork or fish tapeworm. This may suggest that his food was cooked thoroughly, which would have prevented the transmission of these parasites.”, claims Dr. Mitchell.

Dr Jo Appleby, lecturer in human bioarchaeology at the University of Leicester, said: “Despite Richard’s noble background, it appears that his lifestyle did not completely protect him from intestinal parasite infection, which would have been very common at the time.”

Richard, who was killed at the battle of Bosworth Field near Leicester, is one of England’s best known medieval kings because of his portrayal as a villain in Shakespeare’s play Richard III.

His body was buried in Greyfriars Church in Leicester. His remains were excavated from under a council car park, the former site of the church, last September.

The Dig for Richard III was led by the University of Leicester, working with Leicester City Council and in association with the Richard III Society.

The research is published in The Lancet.