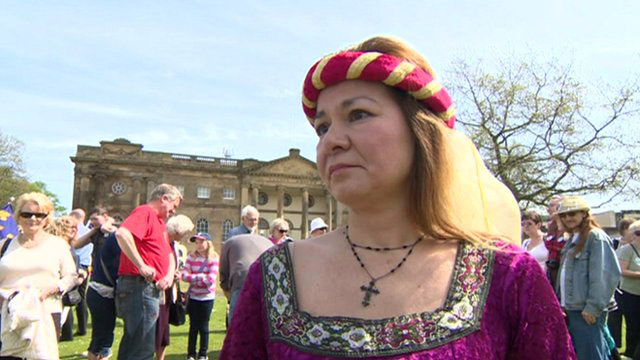 The Plantagenet Alliance: Who do they think they are?

Richard III's relatives fight for him to be buried at York

Ignored? Check. Ridiculed? Check. Fought against? Check. Victory? Expected! The Plantagenet Alliance, who have “crashed Leicester’s Richard III party” by securing a judicial review of where he should be reinterred, can claim to have fulfilled the first three parts of the well-known quote stating “First they ignore you, then they ridicule you, then they fight you, then you win.”

But exactly who are the group? Do they have a case? And what happens if they actually win?

The alliance is trying to get the king’s bones interred in York, rather than Leicester – the city where he was buried, but just about everything is against them.

By all legal and archaeological norms, Leicester’s claim is bulletproof. As the people who dug him up, the university holds a Ministry of Justice licence that lets them decide where the bones go. In keeping with usual practice, and in agreement with the landowner (the city council) the university chose the closest suitable consecrated ground – Leicester Cathedral.

When it was announced in September 2012 that a skeleton which appeared to be Richard had been found, everyone – the government, Leicester City Council, the University of Leicester, Leicester Cathedral, York Minster, the Richard III Society, the academic establishment, the Canadian with the DNA – everyone, expected him to stay in Leicester.

But a small group that did not even exist when, the following February, a flash-filled news conference confirmed the skeleton’s identity, has shaken that certainty to the core.

The Plantagenet Alliance was formed shortly afterwards by Stephen Nicolay, the 16th great-grandson of Richard Plantagenet, 3rd Duke of York (father of Richard III). It included more than a dozen other people claiming similar lineage, with the intention of giving the long-dead king a “voice”.

Ms Roe says: “There are other groups who study Richard but we decided he needed someone to fight for him. “We are his relatives and we decided to put our necks on the block and go down the legislative route.” It was only after the announcement they would seek a judicial review of the government licence that the alliance started to get national attention – not much of it complimentary.

Sir Peter Soulsby, Leicester’s directly-elected mayor, called the challenge “plainly daft”. Much of the criticism focused on the alliance’s claim to legitimacy comes from its members’ family ties. Basic maths shows Richard, who had no surviving children but five siblings, could have millions of “collateral” descendants.

“Maybe there are and maybe there aren’t,” says Ms Roe. “But we can prove our links to Richard, we have studied him and put the work in to get where we are. Many of us have grown up knowing about Richard, we know what he wanted.”

And this almost supernatural bond has raised a few eyebrows. In the absence of any surviving statement that Richard wished to be buried in York, how can anyone be certain? “Not everything is written down but by word of mouth and the actions of a person in their lifetime, you can know what they want.

“Richard spent so much time in the north, he visited York many times, crowned his son Prince of Wales here and planned to build at York minster. It is his adopted, his spiritual, home,” says Ms Roe.

And the detractors were put on the back foot when Mr Justice Haddon-Cave gave the judicial review permission to proceed.

He cited the “unprecedented” nature of the find and the lack of consultation over an issue in which there would be “intense, widespread and legitimate public interest”. He even said Article 8 of the European Convention on Human Rights – which protects the right to family life – had a “role to play” in the judgement.

Was the Plantagenet Alliance surprised at this success?

“No,” says Ms Roe without hesitation. “The judge looked at the facts, un-emotive facts, and came to the right decision.”

While applying for a judicial review costs only £60, legal representation for the application and any subsequent court battle would cost thousands. Can the alliance afford to go up against the Ministry of Justice?

“We will cross that bridge when we come to it,” says Ms Roe. “But we didn’t come into this fight to lose.”

And beyond the indefinable but certainly sizeable prestige of having such a famous name under your floor, there is serious money at stake. Tourism experts have estimated direct ticket sales to a Richard III attraction alone could be worth up to £4m a year. This prompted Leicester City Council to press ahead with a multimillion-pound visitor centre near the original grave and led Leicester Cathedral to begin an internal refit, costing upwards of £1m, to house the tomb.

York bulges with sites of historic interest, Leicester less so. Isn’t it just fairer to let the Midlands city have him? “I can understand why Leicester want him, but I think they are doing it for the wrong reasons,” says Ms Roe. “They want the tourism. Obviously York has got this, that and the other, but for us it is not about that, it never was. It is about putting Richard in his rightful place. Leicester can still have the museum, the cathedral can still have its memorial stone but they shouldn’t have the bones.”

She added: “The more you read about him, the more you find out about how he was treated, both immediately after his death and then maligned by the Tudors and Shakespeare, it does become personal. We want to right a wrong and we have the facts to do that.”

Mike Heyworth, director of the Council for British Archaeology, says the dispute over Richard III could have wider implications. “My gut feeling on this is I’m worried this could lead to requests to dig up remains all over the place to do more DNA testing. These things cost money and you could be facing a situation where a privileged group of individuals potentially do this almost all over the place and I’m not sure that is in the public interest.”

He adds: “You have to apply some sort of public benefit test, not just that because somebody can pay for it, they are automatically entitled to do it.”

Keith Fitzpatrick-Matthews, who runs the Bad Archaeology blog, says it is easy to get tied up in knots over the issues. “The problem with saying you are following Richard’s wishes is firstly, how can you prove what his wishes were and secondly, where do you stop? He was by all accounts a deeply pious Catholic, so it seems very likely he would want to be buried in a Catholic church and not an Anglican one, even if it was a minster. And as he almost certainly believed in the bodily resurrection at the Day of Judgement, he wouldn’t want his skeleton being continually pulled out of storage to be looked at and studied.”