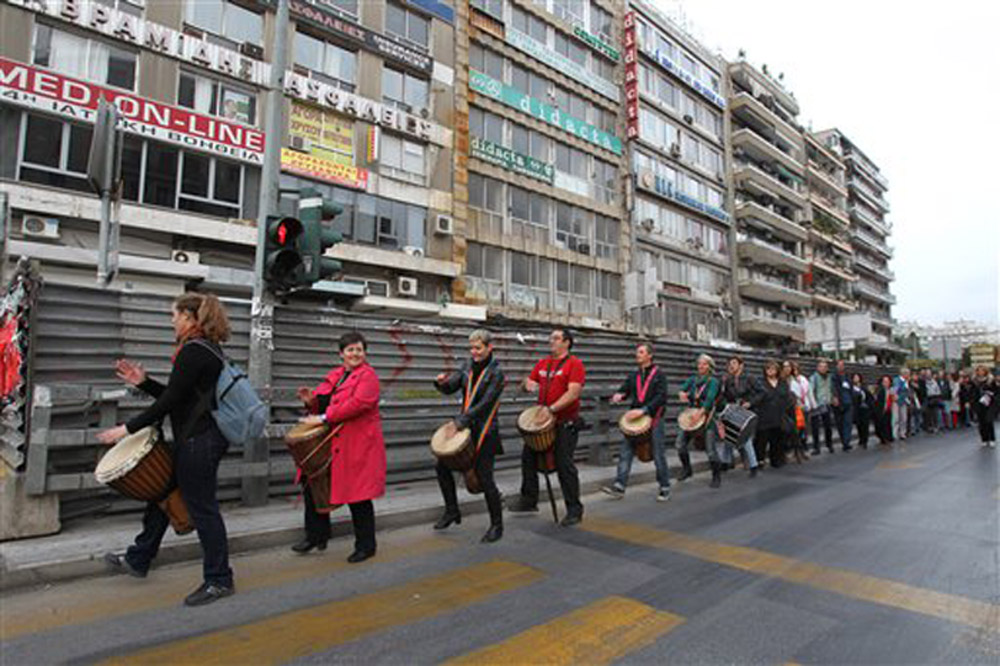 Human Chain to Save Antiquities

When a brand-new subway system hits an ancient road, surely something has to give. But in the northern Greek city of Thessaloniki, archaeologists are fighting to combine the two, against government plans to remove and display elsewhere a large section of an ancient Roman thoroughfare found on a planned subway station.

Some 200 people, including many state-employed archaeologists, on Monday formed a chain round the central Thessaloniki site, beating drums and holding a banner reading “Culture is not business.”

The protest was organized by the Association of Greek Archaeologists, which wants the metro station re-designed to incorporate the ancient remains and has raised more than 12,000 signatures in an online petition to preserve the road.

The 76-meter- (250-foot) long and 7.5-meter-(25-foot) wide stretch of road—a junction of the city’s main road with a smaller street—mostly dates to the 4th century, with 6th century additions. Archaeologists also unearthed the remains of a row of shops, including many jewelers’ workshops, a collapsed monumental stone arch, a sewage conduit and water pipes running parallel to the road.

The state-controlled Attiko Metro, which is overseeing work to build Thessaloniki’s subway system, has argued that it would be extremely costly and time-consuming to preserve the entire remains in the metro station.

But archaeologist Aristotelis Mentzos states that it was essential to preserve such a chunk of Thessaloniki’s past in its original position.

“It is important for the city that relics of its history be incorporated in its living fabric, the metro network,” said Mentzos, a professor at the University of Thessaloniki. “They will draw visitors and city dwellers, but at the same time the city must not be completely alienated from its past.”

Monday’s peaceful protest came a day before Greece’s Supreme Court is expected to discuss an appeal from Thessaloniki’s city council against a Culture Ministry decision to relocate the antiquities for display in another part of the city. The court has already temporarily suspended removal work, pending a final ruling.

Archaeologist Giorgos Velenis insisted that the government’s plans for the remains miss the point.

“Such a complex would have no reason to exist in a different location,” he said.

Thessaloniki was founded in the 4th century BC and became an important city during Byzantine times. Remains of its past stud the modern city center, including mediaeval churches, city walls, a Roman marketplace, a monumental arch and the perfectly preserved Rotunda, a Roman building dating to the 4th century AD that later served as a church.

Work to build a 9.6-kilometer (6-mile) subway network that would ease chronic traffic congestion started in 2006, and is scheduled for completion in 2016. Attiko Metro says it has spent about 75 million euros so far to fund archaeological excavations at construction sites.

The company also oversaw the construction of Athens’ subway, which uncovered a vast wealth of ancient remains. Some were preserved where they were found, with many on public view inside stations, while others were lost.