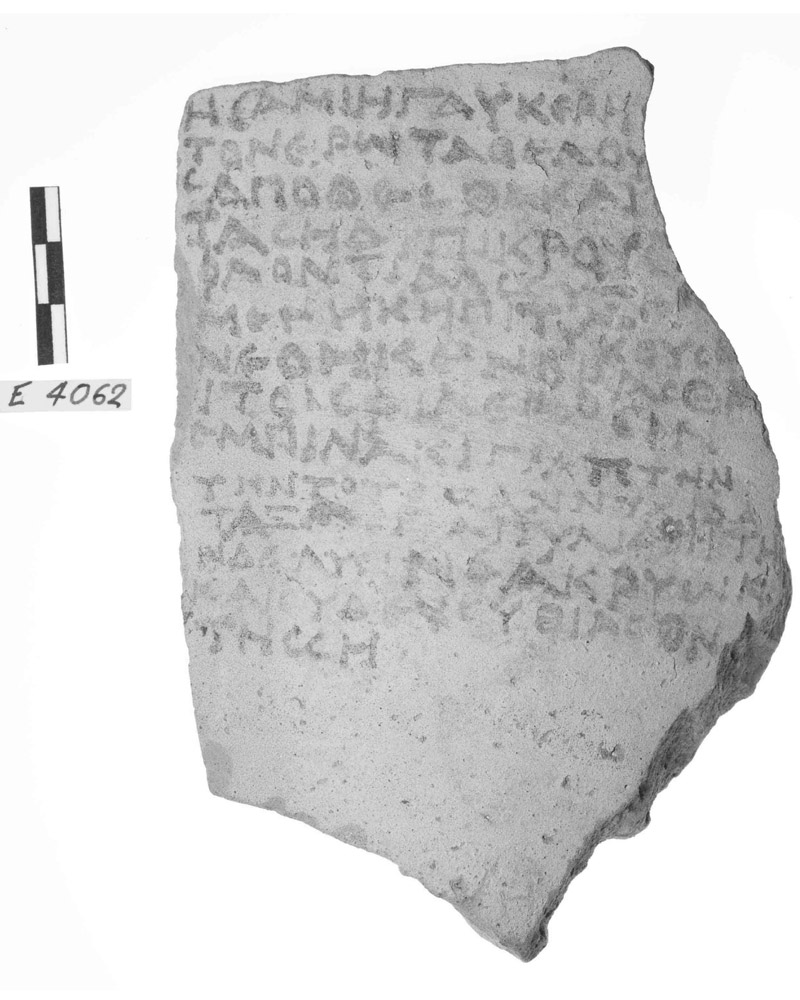 Love as a burden and other “daemons”. This is the theme of an epigram found on an ostracon revealed in Rhodes and dating to the 2nd century BC. Scholars Anastasia Dreliosi-Irakleidou and Nikos Litinas (University of Crete) studied the epigram and published their finds in the current issue (10-12) of Eulimene periodical, where the complete publication can be found.

During excavations on a plot in the central cemetery of Rhodes, a deep filling of black earth with evidence of burning was explored. It contained disintegrated skeleton remains, clay urns, pottery fragments, stamped amphora handles, many small artifacts and a large number of inscribed potsherds. All seem to be transferred there from elsewhere to settle the area probably after a natural disaster. As far as the contents of the inscribed texts are concerned, apart from one literary ostracon, which is edited in this article, all the other ostraca are documentary and their edition is under preparation.

Based on the palaeographical details the ostracon can be dated to the end of the third and the first half of the second century B.C. The scribe does not write breathings, accents and other diacritics. Some phonological interchanges are justified as local linguistic characteristics. Lines 1-10 preserve two elegiac distichs and lines 11-14 contain one pentameter and one incomplete hexameter.

The content of the epigram(s) is that Glykera, perhaps a Samian hetaira, managed to be freed from her eros by vowing to dedicate a painting of a pannychis that had taken place on some occasion. Now a deity is asked that a thiasos already offered should also function as a lysis from eros for Papylides. However, the kind of the thiasos and the way it is dedicated are not clear. Also, there are some questions concerning the corresponding elements between the two stories of Glykera and Papylides. Since there are missing verses or the verses are reversed, as said above, it is uncertain whether the text constitutes one or two different epigrams. In the first scenario, it is most likely that the epigram belongs to the category of erotic ones, in which the poet refers to a past event and now asks the deity to act likewise in a parallel situation. However, it is not certain whether Glykera and Papylides were involved in the past. The name Glykera is characteristic for hetairae, while the name Papylides, which derives from Papylos, is attested only in a Byzantine inscription in Bithynia. The deity involved in this story may be Dionysus (because of the thiasos) or Adonis (because of the pannychis).

The phrase τὴν τότε παννυχίδα is found in Posidippus, the phrase ἀνέθηκεν ὁρᾶσθαι τοῖς φιλέρωσιν finds a good parallel in the Callimachean ἀνέθηκεν ἐπεσσομένοισιν ὁρᾶσθαι, the word φίλερως was used by Meleager, and the phrase καὶ σὺ δέχου is found in two Byzantine epigrams (Julian and Agathias). But these phrases alone could not indicate Posidippus or Callimachus as the potential composer of our epigram. Besides, the metric sequence dddsd in the third verse, where a spondee occurs before the bucolic diaeresis (Naeke’s law), is almost prohibitive in the Hellenistic epigram, with the exception of one verse of Αsclepiades of Samos, one verse of Posidippus and another of Leonides. Moreover, a word-break after the first short syllable of the fourth foot is rare. Therefore, it is more likely that the composer of our epigram is either a poet of the third century B.C., from whom Posidippus borrowed the phrase τὴν τότε παννυχίδα, or a poet of the third or the early second century B.C., who borrowed that phrase from Posidippus.

We might be entitled to conclude that the reference to a Samian hetaira could indicate a Samian epigrammatist, such as Asclepiades or Hedylus. First, Asclepiades influenced Posidippus, Hedylus and Callimachus. The metrical sins in l. 1 and 3 present a strong counter argument to our hypothesis that Asclepiades could be the poet in question, even though the violation of Naeke’s law occurs once in Asclepiades’ poems. However, there exist some other evidence that fits Asclepiades’ vocabulary, style and themes: he had composed another erotic epigram on Samian hetairai (AP 5.207), he had used phrases that refer to Homer (cf. for instance the Homeric ἐν πίνακι on the Rhodian ostracon), and to other lyric poets (cf. the phrase ἀποτίθεμαι ἔρωτα, which refers to Theognis, the adjective ἡδύπικρος and the participle θέλουσα, which refer to the Sapphic γλυκύπικρος and κωὐκ θέλοισα respectively). Moreover, Asclepiades includes technical terms that have a poetic dimension (such as the legal phrase τάσσω λύσιν in the Rhodian epigram) and creates new words by changing one component of an already existing known poetic word (for example the word ἡδυπίκρους instead of γλυκυπίκρους). Finally, some words of our epigram are placed in the same metrical position as in other epigrams of Asclepiades. More precisely, in the AP 5.207, αἱ Σάμιαι are cited in the beginning of the epigram at the start of the first verse, just like ἡ Σαμίη in the Rhodian epigram. In the case of AP 5.202, 6, attributed to Asclepiades or Posidippus, the pronoun τήνδε occurs in the same position in the pentameter of the third elegiac couplet. The composer of our epigram creates an alliteration of Δ καὶ σὺ δέχου θίασον τῆς ση… τάξας Π̣απυλίδῃ τήνδε λύσιν δακρύων (which becomes stronger if we restore Ἄδωνι or Διόνυσε in the missing part). Alliteration is a characteristic feature of Asclepiades, such as the alliteration of Λ in the epigram AP 5.164, 3 and the alliteration of X in the epigram AP 5.162, 2-3. Moreover, the way Asclepiades treats love can be traced in the Rhodian epigram: there is no sign of erotic lust, heterosexual love dominates the epigram and the intense erotic feelings are ridiculed. Finally, the composition of short epigrams (usually of two distichs, but also some of three distichs) is characteristic in Asclepiades. In addition, the adjective ἡδυπίκρους combined with the name Παπ-υλ-ίδης might suggest a word play with the name Hedylus. This could support the hypothesis that either Hedylus, also from Samos, was the composer of the epigram, if we accept that he made a word play with his name, or one of his circle and friends (e.g. Asclepiades) played with his name.

All these observations do not exclude the assumption that the epigram on the ostracon was a composition which imitated well known Hellenistic themes (e.g. of hetaira) and styles (e.g. of Asclepiades, Hedylus or Posidippus). Finally, the archaeological context of the ostracon is not indicative of its use and purpose and cannot explain why and how a Samian woman could be of interest in Rhodes.