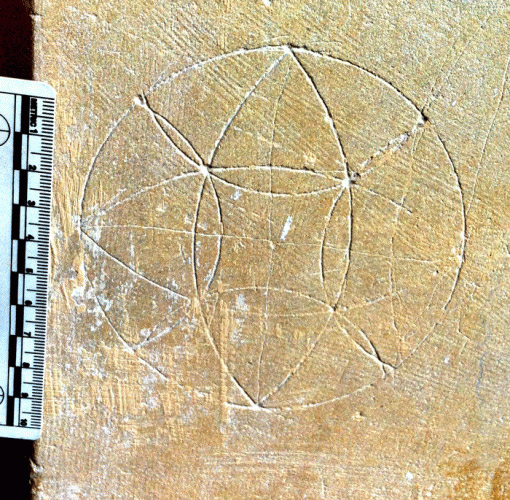 The Norfolk Medieval Graffiti Project, a volunteer led archaeology group that searches England’s medieval churches for early graffiti inscriptions, has been awarded the prestigious Marsh Community Archaeology Award. The Award, run in partnership by the Marsh Christian Trust and the Council for British Archaeology, is given yearly to a community archaeology group in order to recognise and promote high quality archaeological work being carried out by local communities. The prize of £1000 is to be used as the winning project sees fit to further promote is aims.

The award was presented to the group by Historian and TV presenter Michael Wood at a ceremony at the British Academy in London.

The Norfolk Medieval Graffiti Project began in January 2010 with the aim of carrying out the first large scale study of surviving medieval graffiti inscriptions in Norfolk churches. Although the project has so far only managed to survey about 200 of the county’s 650+ medieval churches the results have been a surprise to all involved. Over 80% of the churches surveyed have turned out to contain significant amounts of medieval inscriptions. the 13th century architectural inscriptions at Binham Priory being among them.

More recently the project has been undertaking the very first medieval graffiti survey of Norwich cathedral. The survey teams have now completed over half of the ground floor area, in the process recording several thousand early graffiti inscriptions. These have included everything from medieval ships and music, to names and geometric patterns. One of the most unusual discoveries made at the cathedral were several inscriptions that appear to have been specifically created during the late Middle Ages as ‘curses’.

Project Director Matthew Champion states“The project has made some amazing discoveries and it really highlights the fact that local volunteers can make a real difference to the archaeological record. This sort of project simply wouldn’t be feasible for a professional unit or university to undertake in the current climate. It’s just too big and too expensive. The volunteers have already invested over £100,000 worth of their own time, with the projects actual budget being only a few hundred pounds. The award is really a fantastic recognition that real people can undertake real and meaningful archaeology – and make a real difference.”

“For a project such as this one”, continues Matthew Champion, “any sort of funding is a real bonus. The prize money will be spent on new survey equipment, which we have far too little of, allowing even more people to take part in the project. It is also hoped that we’ll have a little left over to spend on an event to thank all of the volunteers. It is, after all, their award. Sitting in cold and draughty churches staring at the walls can be a little dispiriting at times, so this recognition is a real morale booster”.

Jo Winyard, Director of the Marsh Christian Trust, added “A huge congratulations to all the winners involved in The Norfolk Medieval Graffiti Survey. The Marsh Award for Community Archaeology was set up to support just these sorts of local volunteer initiatives. It is a credit to all those involved that their work and the dissemination of their results have been recognised by this Award.”