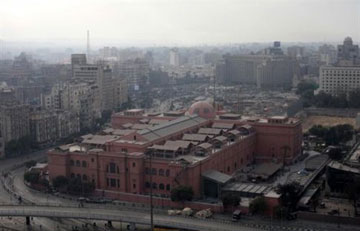 Thousands of Egyptian papyri from the Cairo Museum collection are to be restored and preserved thanks to Italian technology.

The initiative to save the papyri was presented  during a ceremony at the museum attended by Gianpaolo Cantini, director general for the cooperation for development, Egyptian antiquities minister Mohamed Ibrahim, Italian ambassador Maurizio Massari and the museum’s director Tarek el Awadi. It is part of the ‘commodity aid’ programme of Italian cooperation.

High tech instruments provided by Italtrend Spa and produced by Bresciani Srl, which will play a role in saving the museum’s secular papyri, were shown during the ceremony. A laser instrument, a groundbreaking tool in the preservation of artwork, uses non-invasive technology to clean very delicate and sensitive surfaces and allows not to use chemical products. A spectrometer used for chemical-physical measurements and to analyze material without the extraction of samples was also presented.

In order to save and preserve the precious papyri of the Egyptian museum, a low-pressure table with a humidifier to restore paper documents has been provided together with ten humidifiers and thermometers and five climatic chambers to preserve the findings to recreate the same condition as in the tombs where the papyri were found.

They were also especially planned for the museum overlooking the famous Tahrir square, one of the busiest in Cairo, and were made with special gas filters against pollution.

The initiative in favour of the Egyptian antiquities ministry is part of a programme of aid which aims to import to Egypt high-tech Italian products and train specialized personnel in a number of sectors. The programme which spans almost two decades was agreed in 1994, kicked off in 1996 and has funded until today the importation of Italian goods worth 37 million euros. The instalment for the Egyptian museum has a value of 300,000 euros.