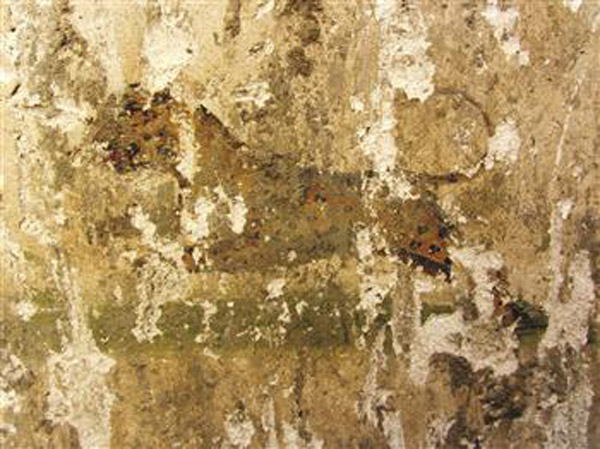 A wall-painting depicting a leopard has been found by archaeologists working at the ancient city of Tripolis in Buldan district, Denizli, Turkey.

The figure adorned the wall of what was once a shop, next to the city’s market area.“We know that the walls of the important buildings in the Roman era were covered with frescoes. We found one of the examples of it. There are various animal and plant figures on the walls of the shops. The leopard figure was significant to us. Zoologists from the university will conduct studies to find out the features of this figure,” said Pamukkale University Professor Bahadır Duman, the head of the excavation team at the ancient Aegean city in the Turkish newspaper Hürriyet. Meanwhile, Buldan Vocation School Director Ercan Haytoğlu said that they were considering using the newly uncovered leopard as a symbol for the district.

So far, excavations within the ancient market premises have yielded two Roman shops that opened onto the city’s main street and dating back to the 3rd century AD.

The research project aiming to uncover and preserve the ancient city is sponsored by the Southern Aegean Development Agency (GEKA).