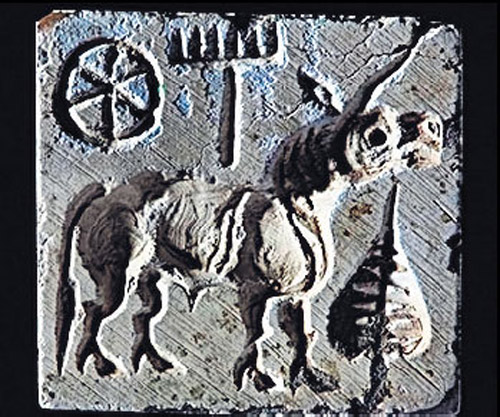 A Prehistoric Unicorn From Rajastan

From the mature Harappan era

Am impressive seal from the time period known as Harappa Era, which bears several characters among which is the image of a unicorn was revealed during excavations of the Archaeological survey of India in the area of Karanpura (Rajastan, India).

“The seal consists of two Harappan characters, with a typical unicorn as the motif and a pipal leaf depicted in front of an animal. There is a knob behind the seal,” says VN Prabhakar, superintending archaeologist, who led the ASI team.

Since its beginning in 2012, the excavation at Karanpura, has brought to light two broad cultural levels, representing the early and the mature Harappan age (2600 BC to 1900 BC). In both levels the archaeologists revealed the remains of mud-brick houses as well as a number of portable artefacts.

“A cubicle chert weight was also unearthed in a different house complex. Both the seal and the weight establishes that the people of this area participated in commercial transactions. We are collecting charcoal sample to date the habitation through radio carbon dating, ” Prabhakar added.