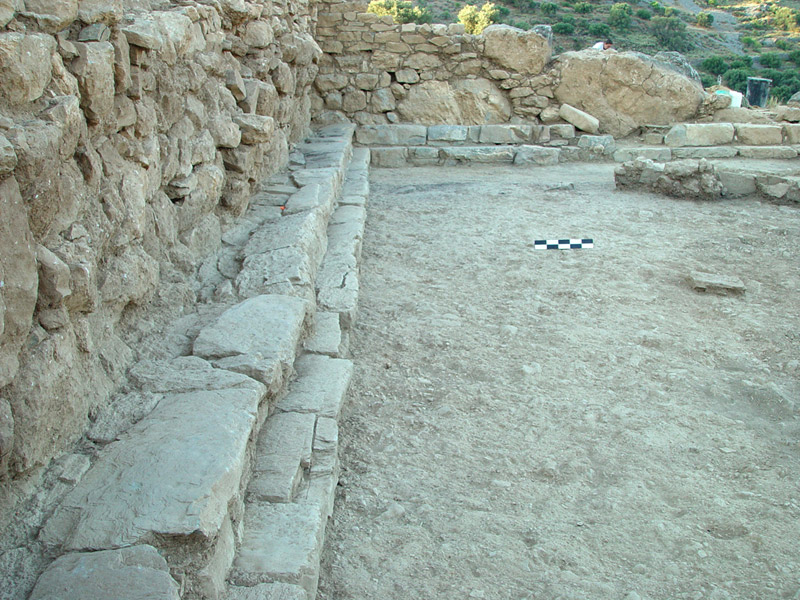 An urban centre of the Archaic period

Researchers led by Donald Haggis from the University of North Carolina are investigating the ancient site of Azoria in Crete aiming to bring to light more evidence on the way teh model of Greek city state was developed and functioned in Archaic Crete.

Situated on a hill overlooking the Gulf of Mirabello in northeastern Crete, Azoria’s most prominent archaeological layers represent the periods corresponding to a long, continuous occupation from the Early Iron Age or Greek Dark Age (1200-700 BC) into the Early Archaic (700-600 BC). The site seems to have suffered serious destruction somewhere in the 5th century BC.

Aiming to explore the early history of the site and develop a stratigraphy and chronology of changes in the settlement during the transition from the Early Iron Age to the Archaic Period -with an emphasis to the 6th century urban centre’s development process- the team began excavating the site in 2002. So far, excavations have revealed a number of houses but also communal buildings reflecting aspects of the city’s inhabitants rich public life: the Communal Dining Building, possibly a venue for communal meals called syssitia, the Monumental Civic Building, a large hall with a stepped bench built into the walls of its interior, and an adjoining two-room shrine.Additionally, teh archaeologists have excavated a number of buildings or facilities thought to have provided support services, containing multiple store rooms (consisting of food stored in pithoi) and kitchens with stone-lined hearths. A well-preserved olive press facility —considered the earliest known beam press of the post-Bronze Age Aegean- has als been discovered.

“The excavation constitutes the first case study of the political economy of Archaic Crete, while augmenting our knowledge of the agropastoral resource base of Aegean communities in early stages of urbanization.” report Donald Haggis and his field director Margaret Mook (Iowa State University).

But what is the future for Azoria? “Our plan of work for 2013-2017 is to excavate an early Greek temple (ca. 1000-700 B.C.E.) and several Archaic-period houses (6th and early 5th c. B.C.E.), and to conduct a number of stratigraphic soundings in the area of the civic buildings in order to refine our understanding of the chronology and history of the site.”, state the excavators.

A field school is operating within the project, which is conducted under the auspices of the American School of Classical Studies at Athens. Positions for volunteers are also available.