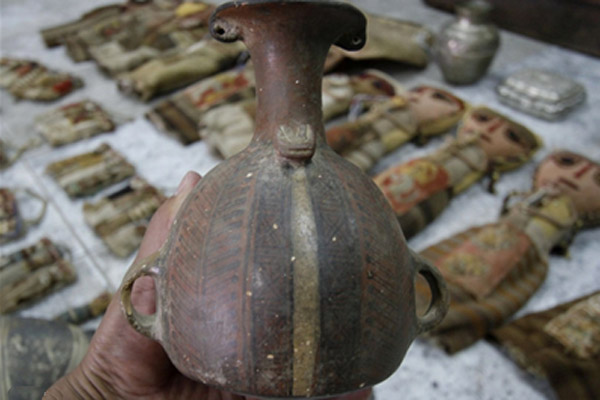 A Bazaar Full of Treasures

Inca and pre-Inca antiquities in the form of pottery and textiles were found by Peruvian police available for purchase in the San Blas market of the historic city of Cuzco, local news agency Andina reported.

According to police major Yuri Cervantes, the police recorded 180 objects, including pottery vessels, textiles and objects of metal representing the Pre Columbian cultures of Inca, Chimu and Chancay. Archaeologist Miguel Colque suggests that the objects might have been taken from looted tombs.

Individuals involved into putting the artefacts in the market are to be charged on the basis of the archaeological law in Peru, which regards Pre Columbian as well as Colonial Era artefacts as antiquities which have to be protected whereas  in situ or in museums. Private collections also exist but the objects have to be registered by the Ministry of Culture. However, illegal antiquity dealing is still a major problem for the country as the large number of well preserved antiquities, poverty, rough rural terrains and high demand by the market combined make a set of elements that challenge its prevention.