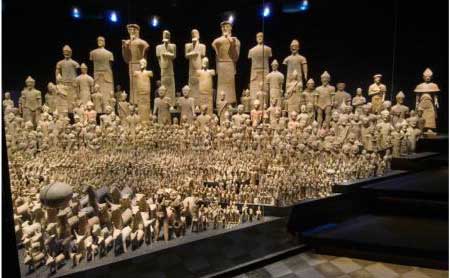 The Ayia Irini sanctuary in Cyprus

In the framework of the Aegean Lecture series, Giorgos Bourogiannis (Postdoctoral researcher, Medelhavsmuseet, Stockholm) will discuss the topic “The Ayia Irini sanctuary in Cyprus: Facing the challenges of an old excavation.” The event will take place on Friday, April 11, 2014 at 19:00 at the Swedish Institute at Athens (Mitseon 9, Acropolis metro station).

As explained in the abstract of the lecture: “The sanctuary of Ayia Irini is arguably one of the most impressive discoveries of the Swedish Expedition in Cyprus (1927-1931). Reputed for its masses of terracotta votive statuary, Ayia Irini has produced one the richest corpora of figures and figurines ever to have been excavated in the ancient Mediterranean. However, in spite of its significance our knowledge of Ayia Irini’s history and archaeology is still insufficient, mainly due to two factors: The first one is related to the publication of the sanctuary that placed particular emphasis on the terracotta figures and figurines as opposed to other groups of material (especially pottery). The second factor has to do with the site’s inaccessibility by modern archaeological research.

“The research project launched by Medelhavsmuseet in 2011 aims to shed light to some of these less known aspects of Ayia Irini’s history. Hosting the biggest collection of (properly excavated) Cypriot antiquities outside of Cyprus, Medelhavsmuseet offers an ideal environment for this kind of research. The project focuses on the pottery fragments produced during the Swedish expedition at Ayia Irini (over 100,000 sherds). This major corpus of evidence was kept in the museum’s storehouses unpublished and unstudied. The sorting, registration and full archaeological documentation of this material is expected to produce new evidence concerning the chronology, the phases and the cultic activity at Ayia Irini. The paper aims to present an outline of the history of the Swedish excavations at Ayia Irini as well as the project’s preliminary results.”