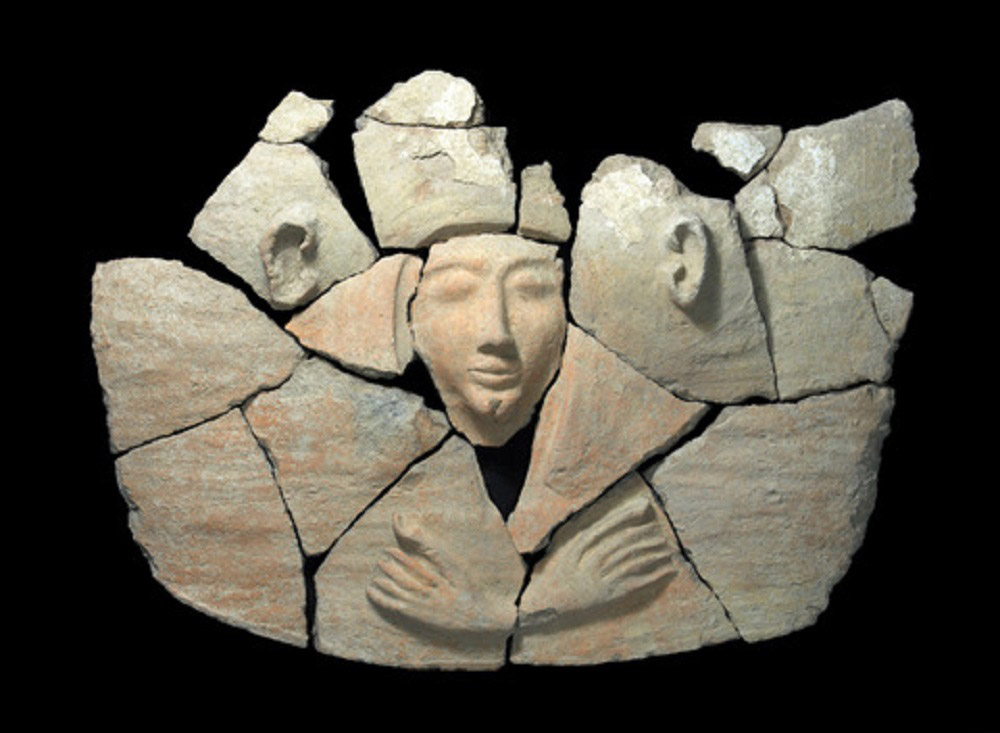 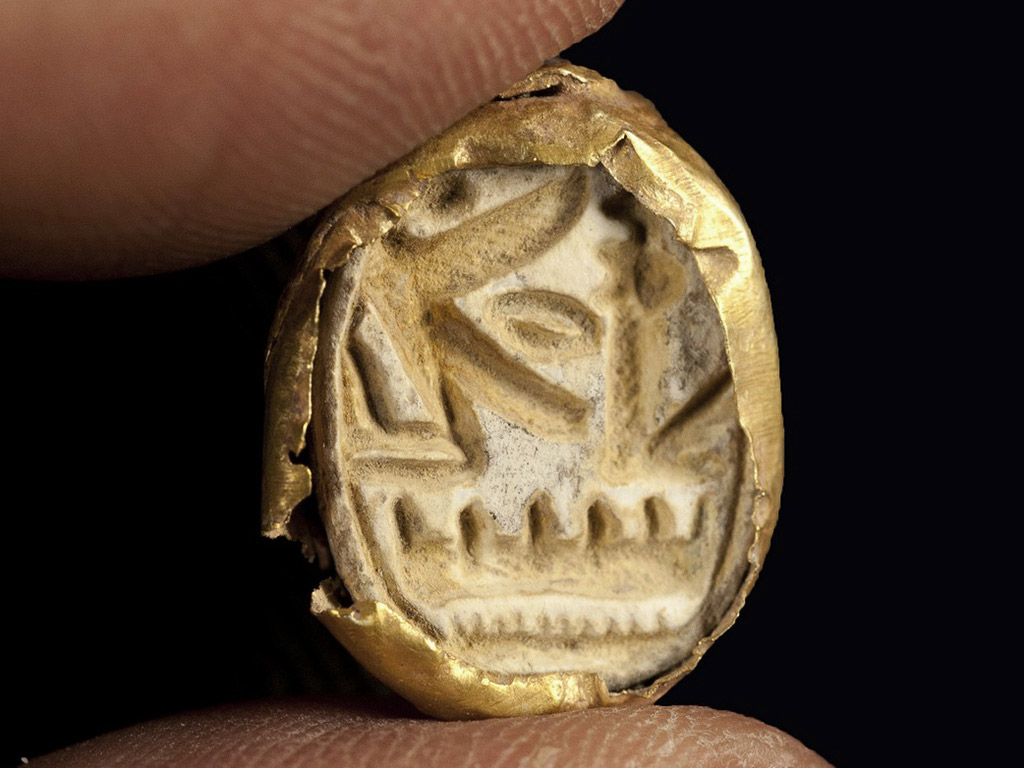 In the tomb of an Egyptianized Canaanite

The tomb of a man with strong ties with Egyptians who held control over a Central Canaanitic territory -currently part of the State of Israel- in the early 13th c. BC. has been revealed by archaeologists of the Israel Antiquities Authority at Tel Shadud, about 15 kilometers (10 miles) southwest of Nazareth in the Jezreel Valley last month. The tomb, whose discovery was announced yesterday contained the remains of a clay Egyptianizing anthropoid sarcophagus, originally cylindrical, and a gonden scarab bearing the praenomen of 19th Dynasty pharaoh Seti I (1290-1279 BC).

According to excavation directors Dr. Edwin van den Brink, Dan Kirzner and Dr. Ron Be’eri of the IAA, the tomb,  found during surveying the area where a natural gas pipeline is to be installed, still contained the remains of an adult man still in his clay sarcophagus. Four other bodies, likely members of the man’s family, were found buried nearby in a similar style, within an area measuring only 5,00m X 5,00m. A bronze drinking bowl, a bronze dagger (both of Canaanite design), and a variety of pottery that included coarseware -storage vessels and tableware- and cultic vessels were found associated with the main burial. Animal bones were also found.

“As was the custom, it seems these were used as offerings for the gods, and were also meant to provide the dead with sustenance in the afterlife”, the team explains.

What was more striking however, was the archaeology surrounding the clay cylindrical sarcophagus and its lid, which came to light in fragments but in situ. The sarcophagus lid is fashioned in the form of a man demonstrating an exquisite, naturalistic style. Clearly imitating Egyptian customs, the human figure depicted bears a stylized Egyptian hairstyle, ears and pharaoh-like crossed hands. Next to the deceased, a small golden scarab seal with the name “Men-Maat-Re”, Pharaoh Seti I’s praenomen (or throne name), was found.

The find might have a significant historical importance, as Seti I is associated with regaining control of a great part of Syria-Palestine on behalf of Egypt, lost during the extended Amarna period. Famously, Seti managed to march his armies up to Beit She’an, south of the Sea of Galilee, and then sustaining control over the area by instating Canaanite vassals to rule on behalf of him. He also levied indemnities to finance his vast construction projects, which included part of Karnak’s Great Hypostyle Hall, the great Temple at Abydos and his exquisitely decorated and well preserved tomb in the Valley of the Kings.

Could the Jezreel male have been an Egyptian or a Canaanite dignitary instated by the Egyptians? While archaeology of the southern Levant is no stranger to clay cylindrical anthropoid coffins (as such coffins have been found at Beit She’an, Deir al-Balah and Tel al-Farah), there is no example sporting such exquisite features so close to Egyptian prototypes as this one from the Jezreel. Also, anthropoid coffins is not the norm in Canaan. “Canaanites… were not accustomed to burying themselves in coffins of this sort. The Canaanite style of burial is different,” explains Dr. B’eri, observing that the man unearthed was laid to rest whole, in an Egyptian style. But, as Egyptians traditionally buried their dead in Egyptian soil, it is still difficult to identify the man as an Egyptian national.

The artifacts, said Be’eri, demonstrates “the presence or very strong cultural influence of Egypt in the Land of Israel during the second millennium BCE, probably amid Canaanite society or in the Canaanite cities that dominated the Jezreel Valley.”

The finds are currently hosted at the IAA labs in Jerusalem’s Har Hotzvim industrial zone, with the most spectacular ones being on display since Wednesday. The IAA is planning to perform a set of analyses in the man’s remains to define elements of his ethnicity.