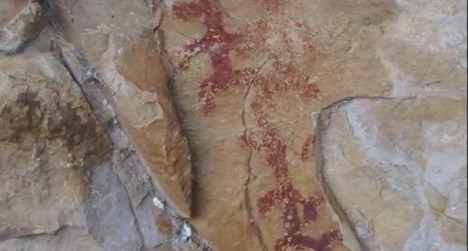 In some cases closing off the caves for safety is the only option, according to FAE official

A 5,000-year old piece of rock art was chipped off the surface it covered at the Los Escolares Cave, a Unesco protected site near the town of Quesada in Spain’s Andalusia region.

News of the destruction, which has been characterised as “irreparable” by the authorities, first emerged last Saturday, when visitors noticed the site’s famous zoomorphic, swallow-like figure depicted had been seriously damaged by thieves, in an attempt to be removed and stolen. Dust and rock fragments which formed part of the painted surface were still on the floor, broken into pieces.

Besides the damage, the incident has alarmed Spanish cultural authorities as the country is home to a large number of rock art samples, some of which (eg. the Altamira cave in Cantabria) are also famous worldwide. As reported by The Local newspaper, Jaén province alone is home to 42 sites with UNESCO-listed rock paintings, many of them freely accessible to the public and without not properly protected, according to the Speleology Federation of Andalusia (FAE). As part of a group of several other hundred sites along Spain’s Mediterranean seaboard, they form are the largest group of rock sites in Europe alltogether, according to Unesco.

José Antonio Berrocal, FAE president, has stated that despite the existence of protective legislation, the lack of political will and adequate security do little to actually protect the sites. He also proposes a more proper monitoring of the sites. “In some cases, closing off those caves may be the only option to protect world heritage paintings,” he added.