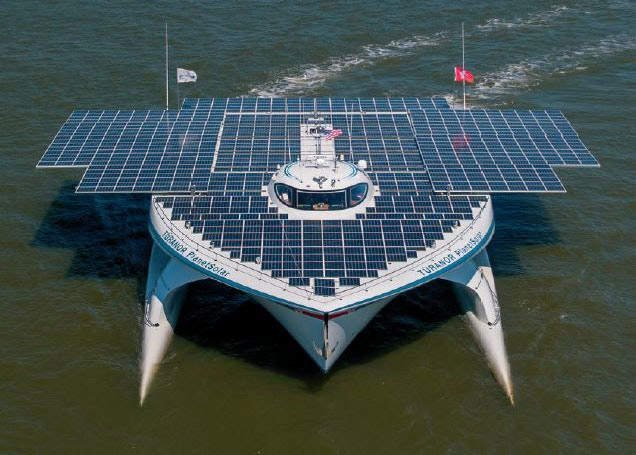 This summer, a group of re­search scientists from Greece and Switzerland will take part in the TerraSubmersa expedition in the Argolic Gulf in Greece

Buoyed by the success of the DeepWater expedition carried out along the Gulf Stream in the spring of 2013, the University of Geneva (UNIGE) and PlanetSolar are launching TerraSubmersa this summer. This new expedition is the result of a close collaboration between the Laténium in Neuchâtel (Switzerland), the Greek Ephorate of Underwater Antiqui­ties, the Swiss School of Archaeology in Greece, and the Hellenic Centre for Marine Research. It aims to explore the prehistoric landscapes sub­merged in the Argolic Gulf in Greece, in an attempt to reconstitute them and perhaps to find traces of human activity.

At the end of the last ice age, around 20,000 years ago, sea level was considerably lower than it is today. By studying these submerged prehis­toric landscapes, archaeologists can reconstitute the environments that have disappeared under water and comprehend the interactions between prehistoric man and the sea. These studies, which are likely to become one of the major archaeological challenges of the 21st centu­ry, will enable to identify the mechanisms of population settlement in coastal areas.

Recent work has demonstrated that navigation in the Eastern Medi­terranean started much earlier than experts have imagined up to now. Indeed, it would appear that man navigated on the seas for the first time more than 100,000 years ago. This discovery would lead us to sug­gest that Greece played a key role in the rise of the Neolithic way of life (around 7,000 B.C.) as it spread from the Middle East into Europe. Scien­tists are thus interested in the spread of the Neolithic civilisation in Eu­rope and in finding out how the nomadic, hunter-gatherer camps of the Palaeolithic and Mesolithic eras transformed into the sedentary villages of farmers of the Neolithic age. Julien Beck, researcher at the Classical Archaeology Unit at the UNIGE and TerraSubmersa scientific leader is fascinated about these questions. «The Franchthi cave on the northern shore of Kiladha bay (Argolic Gulf) was occupied for some 35,000 years, from the Palaeolithic to the Neolithic ages. Such a surprisingly long pe­riod of occupation is an exception in Europe.

The cave is therefore an ideal target for studying submerged prehistoric landscapes, since there must have been interactions between people there and the sea during these many thousands of years», explains Julien Beck. «Maybe we shall find evidence of the very first European village. »

A collaboration between Greece and Switzerland

Thanks to more than 150 years of studies of pile-dwelling sites in Swiss lakes, Switzerland has acquired an outstanding know-how when it comes to sub-aquatic archaeology. This knowledge will be combined with the expertise from Greek and Swiss institutions heavily implicated in the scientific and communication aspects of TerraSubmersa.

PlanetSolar turns into a scientific platform for the second time

Completely transformed into a scientific laboratory for the DeepWater expedition carried out in 2013, the MS Tûranor PlanetSolar, the largest solar-powered catamaran in the world, will again be a sea-borne home for scientists. Thus, an iconic 21st century catamaran, a symbol of modern technology, will lead the search into the past on an expedition that may well be able to re-write the history of the very first man-made boats.

The vessel will mainly be used for carrying out geophysical measure­ments which will enable the scientists to reconstruct the topography of the former coastal areas and to identify possible traces of human activi­ty. The Alkyon, one the Hellenic Centre for Marine Research’s vessels will also be associated to the project. The work will involve the use of lea­ding-edge equipment (a multi-beam echo sounder, sidescan sonar, GPS, etc.). Submarine excavations will then be carried out by divers, using a hydraulic vacuum, operated by a motorised pump on the surface.

All this research work will be preceded by three ports of call, starting on 1st August (Swiss National Day): Eretria, Athens and Nafplio. At each stopover, there will be events organised for the general public, both adults and children (lunches, visits, private meetings, etc.). The two fol­lowing weeks will be devoted entirely to the scientific research.