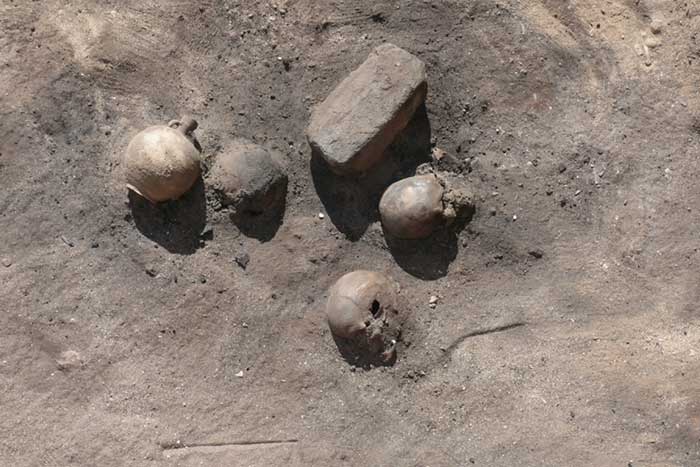 By the team of the Italian Archaeological Mission to Luxor

The team of the Italian Archaeological Mission to Luxor (MAIL) found bodies covered with a thick layer of lime during excavations at the Funerary Complex of Harwa and Akhimenru in the west bank of ancient Thebes. The researchers also found three kilns where the lime -historically used as disinfectant was produced, as well as a giant bonfire containing human remains, where many of the plague victims were incinerated.

The team dated the operation to the third century AD, a time when a series of epidemics, known as the “Plague of Cyprian”, ravaged the Roman Empire, which included Egypt. A bishop of Carthage, Saint Cyprian described the plague as signaling the end of the world.

The plague “according to some sources killed more than 5,000 people a day in Rome alone,” wrote Francesco Tiradritti, director of the Italian mission, in the latest issue of Egyptian Archaeology. The plague occured between roughly 250-271 AD.

Doomed to centuries of oblivion

Tiradritti’s team uncovered the remains of this body-disposal operation between 1997 and 2012. The monument his team is excavating was built in the 7th century BC for a grand steward named Harwa. After Harwa’s death, the Egyptians continuously used the monument for burial. After its use for body disposal during the plague, the monument was abandoned and never used again. The use of the complex “for the disposal of infected corpses gave the monument a lasting bad reputation and doomed it to centuries of oblivion until tomb robbers entered the complex in the early 19th century,” Tiradritti writes.

Signaling the end of the world

Saint Cyprian left a gut-wrenching record of what the victims suffered before they died. “The bowels, relaxed into a constant flux, discharge the bodily strength [and] a fire originated in the marrow ferments into wounds of the fauces (an area of the mouth),” he wrote in Latin in a work called De mortalitate. The “intestines are shaken with a continual vomiting, [and] the eyes are on fire with the injected blood,” he wrote, adding that “in some cases the feet or some parts of the limbs are taken off by the contagion of diseased putrefaction …”

Cyprian believed that the world was coming to an end: “The kingdom of God, beloved brethren, is beginning to be at hand; the reward of life, and the rejoicing of eternal salvation, and the perpetual gladness and possession lately lost of paradise, are now coming, with the passing away of the world …” (translation by Philip Schaff, from the book “Ante-Nicene Fathers”, volume 5, 1885).

The world did not end, but thew plague “killed two Emperors, Hostilian in A.D. 251 AD and Claudius II Gothicus in A.D. 270,” wrote Tiradritti. It is “a generally held opinion that the ‘Plague of Cyprian’ seriously weakened the Roman Empire, hastening its fall.”

The newly unearthed remains at Luxor shed new light at the plague’s potency. The Italian team found no evidence that the victims received any sort of religious rites during their incineration. “We found evidence of corpses either burned or buried inside the lime,” he told Live Science in an interview. “They had to dispose of them without losing any time.”

Aparta from the body disposal site the team is also investigating other parts of Thebes, which is a massive site containing a vast necropolis. The finds help scholars determine how ancient Thebes changed between the 7th century BC and today.

The funerary complex of Harwa and Akhimenru, which the MAIL has been excavating since 1995, is one of the largest private funerary monuments of Egypt. Tiradritti notes that it is considered a key monument for studying a peak period in Egyptian art known as the “Pharaonic Renaissance” that lasted from the start of the 7th century B.C. until the mid-sixth century BC. During this time, Tiradritti notes, artists created innovative new works that were rooted in older Egyptian artistic traditions.

What caused the plague?

As for the plague modern day scientists believe it may have been some form of smallpox or measles. While the discovery of human remains associated with the plague will give anthropologists new material to study, Tiradritti cautions they will not be able to extract DNA from the bodies.

While stories about researchers extracting DNA from mummies (such as Tutankhamun) have made headlines in recent years, Tiradritti told Live Science he doesn’t believe the results from such ancient specimens. “In a climate like Egypt, the DNA is completely destroyed,” he said. DNA breaks down over time, and permafrost (something not found in Egypt) is the best place to find ancient DNA samples, Tiradritti explained.