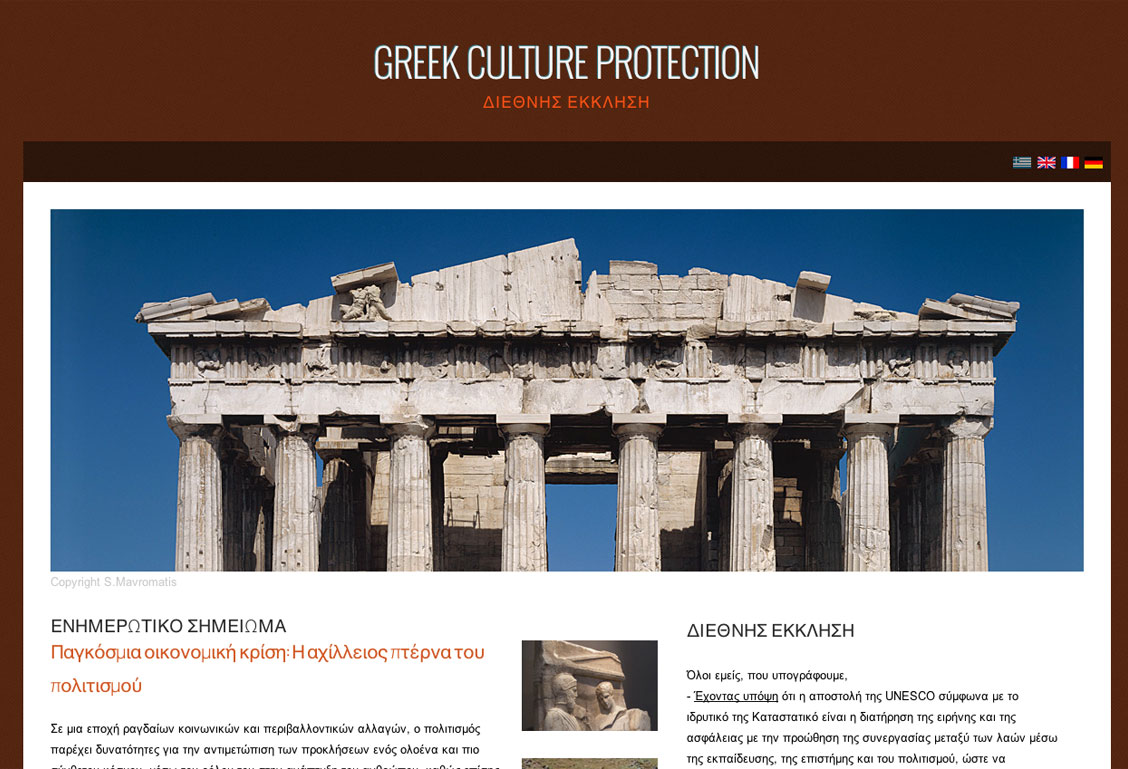 A new threat has emerged for monuments: the global financial crisis is having a devastating effect on the rich cultural heritage of Greece, according to the new Greek initiative appealing to UNESCO for the protection of Greek cultural heritage through its website www.greekcultureprotection.com. “The protection, conservation and presentation of cultural heritage is one that interests the international Community and it should be considered as a moral obligation upon all human beings”, the explanatory note of the initiative reads.

According to Eleni Methodiou, archaeologist and former Counsellor on Cultural Affairs to the Permanent Delegation of Greece to UNESCO this Greek initiative presents for the first time the global financial crisis as a new threat for monuments. Also for the first time eminent personalities of the world appeal to this international organization for this issue. The aim of the initiative is to raise awareness of the public and to motivate UNESCO to include culture as a pillar of the Post-2015 UN Development agenda.

The initiative was triggered after the Prof. in Constitutional Law George Kassimatis stated that the memorandum and privatization threaten monuments. Since the launch of the website the public response was spectacular. Nadine Gordimer, Dario Fo, Günter Grass, Noam Chomsky, Mario Botta among others supported the appeal.

As mentioned in the explanatory note: “The Ministry’s of Culture budget has been cut by 50% over the past 3 years. a large number of cultural employees have been dismissed. The State authorities can’t implement any more projects concerning the effective protection, conservation, and presentation of monuments and sites. Research and excavations are being abandoned. Museums are closed or shut down entire halls because of shortage of guards. Clandestine excavations, pillage and illicit trafficking of cultural property increased by 25% the past 3 years.” The text also refers to the international treaties which endeavor to protect and safeguard the world’s cultural and natural heritage, intangible heritage, museum collections, and to support creativity and innovation.